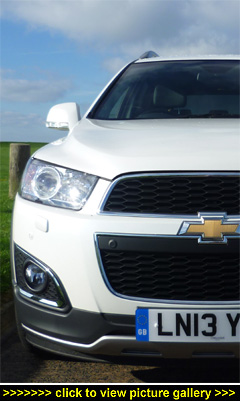 “Sure and if it’s seven seats and
four-wheel drive you’ll be after
then the family-friendly Chevrolet
Captiva will be the SUV for you...”

STEP UP INTO the latest Captiva and you'll find yourself in a spacious and airy cabin that easily accommodates five adults with genuine room for two more in the third row. Used for a spot of load-lugging, it also offers a versatile and multi-reconfigurable 1,577 litres.

Just one five-seat version is available if that suits you better, although it can only be had in the range-starter LS trim with a 160bhp version of the 181bhp four-cylinder 2.2-litre diesel engine you'll find under the bonnets of the mid-range LT and the range-topping LTZ Captivas. All 7-seat versions use the more potent 181bhp unit, which pumps out 37 more pound-feet of torque at the same 2,000rpm — 295lb ft of it.

The more pokey 181bhp unit is a likeable engine; all that torque makes it smoothly punchy low down. And you don't need to work it hard to make good progress as the six-speed manual box's ratios keep it happily on the boil in the 2-3,000rpm sweet spot so there's always a good burst of speed available using the gears.

Officially 2,231cc turbodiesel returns 44.1mpg on the combined cycle (35.7 urban and 50.4mpg extra-urban). The average at the end of our demanding week-long test (for most of the time we had the fuel-optimising Eco stop-start system switched off) came out at 33.3mpg — about par for the course for most 4x4 SUVs of this size and definitely a worst-case scenario meaning many drivers should beat our figures.

The Captiva, in seven-seat guise, is what's best described as a family-oriented Sports Utility Vehicle. Earning it the SUV tag is a pro-active, on-demand all-wheel drive system. In normal conditions it's the Captiva's front wheels that do all the running, but the instant any slip or loss of traction is detected then power is automatically also fed to the rear as well, switching the Captiva to full-on four-wheel drive.

And its four-wheel drive is not just for clambering over kerbs in the Royal Borough of Kensington and Chelsea — its effective approach and departure angles make it more than capable for a rumble in the jungle. While that's reassuring to know, most Captivas will be trapped in urban jungles.

Where they're perfectly at home. Our gleaming white (Snowflake White Pearl) test Captiva LTZ turned up looking resplendently urbane; the spiffing 19-inch, five-arm alloy wheels it was riding on were icing on the cake. Kerb appeal (not to be confused with the less desirable 'bling') it has a-plenty.

Chevrolet's gold-coloured 'bow tie' separates the stacked upper and lower grilles on the Captiva's self-assured nose — a nice front for its clean-cut yet subtly rugged lines. Contemporary touches at the back include LED rear lights and custom-shaped chromed tailpipes.

Inside it's equally good-looking with a neat instrument 'set' with ice-blue back-lighting and a wide centre stack that forms a 'T' with the fascia — at the top of the stack is the infotainment/SatNav touchscreen; below it the climate control. Silver-finish trim is nicely juxtaposed with lacquered trim inserts to the lower fascia and doors — and it all looks nicely harmonious.

The Captiva driver enjoys a first class driving position thanks to a power seat with manual lumbar adjustment, a leather-wrapped, four-spoke, multifunction wheel (cruise, phone, audio) with sensible dark grey spokes — so no reflections on sunny days (more car makers should do this). The gearlever has a clean change action so no worries there, plus there's a wide left-foot rest for when the cruise control is on duty.

Big, seriously well-padded leather seats with headrests that tilt adjust provide support and comfort in equal measure on all journeys; and make long ones feel as quick as short ones. Outer armrests are big, wide and effective, and you'll find plenty of head, shoulder, elbow, leg and foot room.

The same can be said about the 60:40 split middle row with a fold-down centre armrest, and whose backrests are also semi-reclinable which means near-six-footers can indulge in some authentic lounging when sitting behind another six-footer — all of which helps make the Captiva a relaxing place in which to cover the miles.

Despite their size, many SUVs fall down on interior storage space. No so the Captiva. It provides a really big glovebox, plenty of cup holders, a deep lidded bin top centre of the fascia, a lined coin box, a glasses case above the rear-view mirror, and large door pockets, as well as a sliding tray under the front passenger seat.

Capped by an armrest, the centre storage box between the front seats is also large — but there's a natty twist: slide the twin cup-holder rearwards and you have access to a huge (and we mean huge) secret storage area that extends far back under the armrest upper bin.

Unexpectedly good; that's the Captiva's pair of third row seats. And you don't have to be a contortionist or a six-year-old to reach them because both middle row seats lift and tilt forward for straightforward access. Once settled in seats 6 and 7 there's plenty of space and grown-ups will feel right at home with lots of head- and kneeroom. When not required they can be conveniently 'disappeared' under the boot floor. Admittedly with all seven seats in use there's not much room for luggage (just 97 litres) but with rows two and three folded and just two sitting up front there's 1,577 litres.

Particularly handy is the split tailgate's opening rear window (operated by a press on the key fob) that can be opened separately from the tailgate — great for dropping in small items, especially if you're parked tight, for instance in front of a wall.

There's additional storage under the boot floor, boosted by deep side bins behind the wheel arches. The big tailgate is light to lift, and opens high. And should you need to transport extra-long items, the front passenger seat backrest folds completely flat.

With its commanding driving position the Capitva is as easy to park as it is to place on the road. The steering is accurate and, off-road where it really matters, well damped against kickback — in many soft-roaders, hitting a hidden rock or rut off-road can spin the wheel and you could break more than just a nail! But that won't happen to you in a Captiva.

We were also impressed with the Captiva's brakes: not just because they're smoothly progressive in everyday driving but particularly because, when you need them to, they can haul this pretty heavy Chevy down from fast speeds reassuringly quickly.

Composed. That's a good word for the Captiva's well controlled ride and road manners. Even with every seat filled, the suspension does its stuff and keeps everything shipshape handling-wise and everyone aboard relaxed. Confirming this, nobody who travelled in our Captiva voiced any complaints about the ride (and that's with the 19-inch wheels). It's a major strength, the ride, as it makes for soothing and laid-back travel.

Most agree that Chevrolet can take credit for being the creator of the entire SUV segment with their Suburban model way back in 1935. Today's Captiva seven-seat soft-roader is competent enough off-road to get you out of the rough once you're in it, but it also scores strongly on space and kit, and, most importantly, rides the tarmac well. — MotorBar