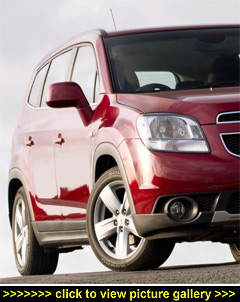 “The Yanks are coming! The all-new
Orlando seven-seat MPV on sale in
March is the first of seven new
Chevrolet models coming to the UK
in the next 15 months...”

AS A REMINDER, Chevrolet is General Motors largest global brand with annual sales of around 3.5 million vehicles in more than 130 countries with a new car sold somewhere in the world every 7.4 seconds!

Just for the record, after the arrival of the Orlando MPV the other new Chevrolet models will be the Captiva SUV, the Cruze five-door hatchback, the Aveo supermini, 426bhp V8 Camaro coupe and convertible American muscle car and the Volt electric car.

Based on the Cruze platform, the all-new Orlando is available with a 1.8-litre petrol engine and two 2.0-litre diesel (128 and 160bhp) units. Customers have the choice of LS, LT, LTZ and LTZ Exec Pack levels of specification depending on which engine is chosen. Prices range from Ł16,395 to Ł23,195.

The single best-selling version is expected to be the LT 2.0-litre 128bhp diesel, priced at Ł18,645. All are covered by Chevrolet's customer-friendly Five Year Promise — a package of a five-year 100,000-mile warranty with servicing, roadside assistance and MOT test cover.

The new Orlando — with seven seats accommodated in the usual three-row arrangement — is 4.6m long but, unlike many large MPVs, it isn't van-like; it looks like a bold and elongated hatchback with four hinged side doors and a top-hinged rear tailgate.

Its most obvious competitors are the new Ford Grand C-Max (which has rear side sliding doors), the excellent Peugeot 5008, the Volkswagen Touran and the forthcoming Vauxhall Zafira seven-seater which is reputed to use the same floorpan as Chevrolet — Vauxhall and Opel share many components.

In addition to well-abled customers, families with children and older couples with grandchildren, Chevrolet also have a keen following from the Mobility sector of the less-abled and already there is huge interest from these users with enquiries before the March on-sale date up by 218%.

Inside, the Orlando looks thoroughly modern with clean lines and well organised controls and instruments. The hard plastics are not the most pleasing to touch as they are not the higher quality, soft-feel used by many manufacturers — but they will be durable.

Numerous seating configurations are possible with either second or third rows folded independently or together to make a completely flat load area. With the centre and rear seats folded down there's a maximum load carrying area of 1,499 litres. In its most usual configuration — with five seats in place — the load area offers 852 litres of space. But with all three rows in use, the boot has just 89 litres of room — not very much.

Specification is generally very good value for the money — that, along with its seven-seater design, will be its main selling point.

It also includes two clever innovations: a supplementary rear-view mirror allowing both driver and passenger to see all of the car's occupants; and an extremely clever hidden cubby compartment behind the stereo facia — the perfect place to conceal MP3s, phones and iPods away from prying eyes.

The LS is available with the 139bhp 1.8-litre petrol engine and five-speed manual gearbox or with a new 128bhp 2.0-litre diesel unit a six-speed manual transmission.

In addition to the engines already listed, the LT can be specified with the most powerful Orlando unit — a 160bhp 2.0-litre diesel with six-speed manual transmission or, optionally, a six-speed auto.

My first brief test drive at the press launch event — conveniently on my local Cotswold roads and ironically the same venue Ford used for their recent press introduction of the C-Max and Grand C-Max — didn't get off to a confident start. First of all I drove the 1.8-litre petrol model but with the very top LTZ specification with the optional 18-inch wheels. Not a good start… The 139bhp petrol unit was capable — just — but pretty gutless and it desperately needs a six-speed 'box to reduce the noise at cruising speeds.

That said, the fuel economy of 40.3mpg was slightly better than the official 39mpg quoted. But the biggest drawback was the oversized 18-inch wheels. They didn't cope at all with the ruts, ridges and bumps, making the handling erratic and the ride very uncomfortable.

Fortunately, transferring to the main-selling 2.0-litre 128bhp turbodiesel with LT specification and standard 16-inch wheels was a revelation. The engine was much stronger and really very well suited to a vehicle of this size.

The fuel economy over the same route was 44.4mpg against the official 47mpg, not a great difference, but the unit was more responsive and, thanks to the standard six-speed gearbox, it sounded less stressed at cruising speeds.

Thanks to the smaller wheels, the biggest improvement was definitely in the handling and ride comfort departments. There was plenty of front-end grip, the cornering was predictable and the steering sharper. This version coped easily with the poor road surfaces so my advice would be to go for 16-inch wheels — the ride/handling difference is huge.

So, deal or no deal? On the minus side, it's not as practical or desirable as other new MPVs of the same size and the large 18-inch wheel option destroys handling and ride comfort capabilities.

On the plus side, the Orlando is relatively cheap to buy considering the high specification and seating for up to seven people. It also looks smart, seems well put together and comes with a durable, rather than plush, interior.

Orlando the vehicle could be an exciting place for family transportation and Orlando the place is an exciting venue to go on holiday with Walt Disney World being one of its main attractions. And this new Orlando seven-seat MPV is no Mickey Mouse people carrier but the real McCoy! — David Miles