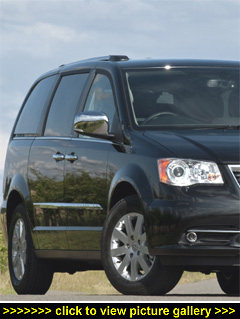 “Some people would have you
believe people carriers are passé;
elbowed aside by the new breed
of family-friendly SUVs. Don’t you
believe it. One PC that’s bucking
the trend is Chrysler’s epic Grand
Voyager...”

THE YANKS HAVE A SAYING: 'There's no substitute for cubic inches' that applies to power (their cubic inches being our litres). We might add 'there's no substitute for seven seats' if, that is, you need 'em. If you do, the Grand Voyager lives up to the 'grand' in its name — with seven seats for seven real-world people not just the usual two adults plus five kids cop-out.

Climb aboard and you'll be welcomed into big comfy seats; upholstered in black leather with suede upper back facings, they're well padded and well bolstered. Captain's style drop-down side inner armrests add to the comfort while full power adjustment make getting settled the work of seconds. All seven seats benefit from reclinable backrests. The driver does slightly better with powered lumbar adjustment — but then he or she is doing all the work piloting the Voyager.

Not that that's too demanding. The Voyager is an easy steer with all the essential driver labour-saving aids from an easy entry/exit powered sliding driver's chair (on key-out/key-in), power steering, a good-to-grip multifunction leather wheel with remote buttons for cruise, audio, fone, navigation, and even a compass. The transmission is automatic (of course) with a manual override if you're feeling energetic.

The handbrake is a traditional item, which should please most everyone (there's also Hill Start Assist, just to be sure), the AirCon is two-zone with full A/C control in the rear, and the front seats are heated: in two stages — fast and hot; and fast and very hot. Perfect for our bone-biting English winters. If you like to maintain wide personal borders then you'll just love travelling in the Voyager: the driver and front passenger sit so far apart you could run longhorns in the space between the seats.

Powerfold mirrors on demand, a good clear touchscreen SatNav screen that includes an infotainment centre (all of which is intuitive to grasp and easy to recall), drive-away locking, and all six side windows are power operated: the front two are one-shot auto up/down; the middle two standard power; and the rearmost pair are side-hinged but still electrically-operated and when opened let in a refreshing flow of real air.

Storage solutions are as big-hearted as the rest of the Voyager: you'll find a good-sized glovebox and a glasses holder plus big door bins, open trays, cup-holders and bottle-holders in every row. Pop-up picnic trays are fitted to the front seatbacks. If you're adverse to the rays of the sun or the paparazzi then you'll appreciate the privacy glass and blinds on all four side windows aft of the B-pillars.

Power-hungry people will be pleased to hear the automation doesn't, like on most cars, begin and end with the seats and windows. No, sir, the Grand Voyager has got the lot. Both rear side-sliding doors are power-operated (near-silently too and great for exit and entry in tight parking bays) with auto open and close — just lightly pull on the inner or outer handles and it's 'Open Sesame'.

Even the tailgate is power operated; both opening and closing. And, like the sliding doors, the tailgate can be controlled via an internal button, using the handle or pressing the appropriate button on the key fob.

All in all the Voyager reminded me of the spaceship Axiom in WALL-E where people have almost forgotten how to walk after years of relying on the ship's automated systems for their every need.

The Grand Voyager sports clean-cut good looks, enhanced externally by lots of quality chrome finishing. So what if curves are kept to a minimum? All the better to maximise space on the inside; and judging by the outside (5,143mm by 1,954mm), that means a lot of cabin space.

Where the Voyager differs from almost all others is that its seven seats are arranged in a surprisingly accommodating 2:2:3 format rather than the expected 2:3:2. It's an arrangement that works very well indeed — and not just because it leaves a wide open corridor between the middle two seats to the third row.

The really, really good news is the Voyager's brilliant Stow 'n' Go seating. As you might have guessed, power is the key. Power slide the front seats fully forward, fold back the floor panel (sorry, but you have to do this bit manually), then pull a lever in the very large second row individual chairs (both, by the way, with two-stage heating and captain's armrests both sides) and they fold 'n' swing down into the floor in one fluid movement.

Fold back the floor panel and you're left with a totally flat middle section loadbay. And thanks to a two-memory setting for the driver's seat, returning it to its original position takes nothing more arduous than pressing a button.

Worth noting is that these two large underfloor wells are actually one big hold (the nearside and offside floor panels only give the impression there are two separate wells) which, when the seats are being used, provides a secondary mini-boot that outdoes the boots found on many small city cars.

Now step around to the back, power-pop the tailgate, press the appropriate switch and the 60:40 split three-seat rear bench performs a similar party trick to the middle pair, but this time under power as it disappears below the floor. Voilŕ! You now have a truly massive cargo bay with an absolutely flat floor that looks big enough to drive an Abrams battle tank into (a slight exaggeration, although 3,296 litres is still pretty damn big). For the record you can, if you need, just fold away one side of the rear bench.

If you're travelling 'light' (that is, with just the four individual chairs occupied) and leave the third row folded away out of sight under the boot floor, you'll have a very large boot — 756 litres.

By now you'll appreciate that with all the luxuries there's a lot for the engine to pull. Under the bonnet there's a 2.8-litre CRD diesel mated to a six-speed autobox.

This punchy four-pot is more than fit for purpose, kicking out 178bhp and, more importantly, 265lb ft of torque between 1,600 and 3,000rpm. Good enough to get the Grand Voyager off the line to the benchmark 62mph in 12.8 seconds and on to a maximum speed of 115mph.

But, I hear you saying, that's got to be a recipe for some serious gas-guzzling. Actually, no. Officially it should return 35.8mpg on the combined cycle and 44.8 on the extra-urban cycle. A week's hard driving, often with our test Grand Voyager fully laden with heavy household items during a house move, saw a test average of 35.2mpg. Driven with a lighter right foot, we would think that Chrysler's extra-urban figure is not out of reach on long motorway trips.

While you could be forgiven for thinking that aboard the Grand Voyager (not to be confused with the fictional USS Voyager commanded by Captain Kathryn Janeway in Star Trek: Voyager) your passengers will have all the fun — what with their big heated armchairs, individual roof-mounted DVD players, games consoles, wireless headphones, and even climate control, and a smooth cosseting ride along with a quiet cabin ambience that shrinks long distances — that's not quite true.

The Voyager is unexpectedly wieldy. Sitting high in what's more of an armchair than a car seat, with excellent visibility all-round thanks to large glass areas, you'll be pleasantly surprised to discover that the Grand Voyager is easy to place on the road and judge in traffic.

The steering's fine, the handling tidy and reassuringly predictable, body roll is well contained through bends and around corners and it tracks true at speed. In short it's actually relaxing to drive. There's an effective traction control system back-stopping you so even in the wet the Voyager doesn't feel any less assured. Reassuring when it's your whole family in the car with you.

Highly specced, spacious club-like accommodation and comfort and more headroom than a private jet. I don't know about 'no substitute for CCs' but the Grand Voyager undoubtedly proves that there's no substitute for PCs (People Carriers)! — MotorBar