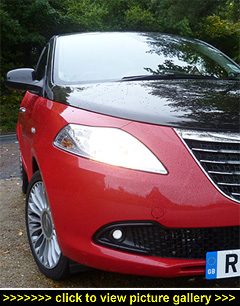 “Tasked with regaining customer
confidence in the Chrysler brand in
the UK, the Ypsilon supermini has
risen to the challenge with more
than a hint of panache — but then
behind the American badge is an
Italian soul (the Fiat Group own
both Chrysler and Lancia; and the
Lancia Ypsilon — already well-know
to European drivers — is where
this new Chrysler Ypsilon’s DNA
springs from...”

WE'VE JUST SPENT A WEEK behind the wheel of the Red & Black edition Ypsilon that, as its name suggests, comes outfitted in red and black. Externally that means a glossy red paint job smartly topped off with a black clamshell bonnet, roof and tailgate. In this striking get-up the Ypsilon is quite the head-turner — whether it's other drivers' heads straining for a better look, or rubbernecking foot traffic.

The styling, combined with the Red & Black's two-tone paintwork, is definitely funky: the clamshell bonnet caps a pair of streamlined projector-type headlights (with integrated daytime running lights) either side of a chromed, five-bar Chrysler shield grille. And it's all cleverly done — a snapshot glance at the Ypsilon's flanks would have you believe its a three-door coupe.

Look closer, though, and you'll spot the back door handles, set high up in the topmost trailing edges of the rear window frames. Another neat detail — the outer tips of each Diamond-finish alloy wheel's eighteen spokes is shaped like a 'Y' (for Ypsilon).

Pull open a door and you'll find the red-and-black theme is echoed inside — tastefully; and all very Italian. The red-and-black leather upholstery is a real eye-opener and the shapely, nicely bolstered seats really are as comfortable and supportive as their dramatic looks promise.

Vividly arresting too is the intriguing bright red material used to cover the fascia and door panels — it looks and feels just like painted silk. Not only does it look fabulous, but it's extremely tactile.

The cabin is surprisingly roomy for a 3.8-metre long supermini but what makes it credible as a five-seater is its higher than usual roofline. Upfront its wide enough for two adults to feel relaxed, with wide outer armrests in the doors. Getting in the back is no problem and the short rear doors are car-park friendly. Foot room is generous, and the rear cabin will accommodate a couple of adults with a child sitting between them — two is, as with almost every other car made, always the better number.

Settle behind the leather-wrapped steering wheel and your first question is: Where have all the instruments gone? They're all there; only not in the traditional spot. The only thing in front of you is the steering wheel — all the instruments are housed in a rectangular pod mounted dead centre on the fascia and although this puts the speedometer over to the left of the dash's centreline, you quickly adjust.

Adding to the 'cockpit-feel' ambience is a buttressed centre stack that houses the AirCon, audio and high-set gear lever. The driving position is fine (even though the wheel only adjusts for height) and the driver's seat is height-adjustable.

Another plus for both driver and passengers is that the TwinAir is perfectly happy to cruise all day at a steady 70mph, at which speed noise levels in the cabin are low — adding to its ability to deliver on two fronts: as a City car in town; and as a real-world long-distance machine.

Unfortunately there's no spare wheel so it's one of the ubiquitous 'inflation' kits. Other than that, there's an adequate 245 litres for luggage in the boot. Fold the 60:40 split rear seatbacks and load space jumps to 820 litres with a cargo bay floor that measures approximately 4 x 3 feet.

The seatbacks don't fold completely flat and there's a small step-up from the boot floor but it's still very usable for transporting larger items. The loading lip is mid-thigh-height and there's an eight inch drop down to the boot floor. A rigid, lightweight lift-up parcel shelf doubles as a luggage compartment cover.

Three powerplants are on offer: 1.2-litre four-cylinder petrol with 69bhp; a 1.3-litre M-Jet diesel (95bhp) and, as tested here, the petrol-drinking supercharged and turboed TwinAir that wrings an entertaining 85bhp from less than a litre (875cc). Unexpectedly, it's this feisty two-cylinder motor (2011's International Engine of the Year) that also offers the option of an automatic transmission.

Alongside its 85bhp, the TwinAir generates 107lb ft of torque. And despite only having two cylinders, is quite the party cracker: a 109mph top speed with the dash to 62mph sorted in 11.9 seconds.

Don't be put off by the small capacity power source: the two-pot engine is eager to please, with a free-revving willingness to work all the way to the red-line, encouraging you to exploit every one of the its 85 horses, gee'd on by its characterful rorty two-pot soundtrack.

Mounted high on the centre stack, the gear lever is well-placed for quick-shifting and, combined with a clean shift action, makes swapping cogs all part of the entertainment.

Helped by a Start&Stop function, the Ypsilon's headline combined cycle consumption is 67.3mpg; we didn't see that, but over the course of our week-long test we did manage to consistently top 50mpg (51.9) which should satisfy most owners.

If you're really serious about optimising your fuel consumption, you can press the ECO button on the fascia — this limits the torque to 73 of the maximum 107lb ft — and change gear when the gear shift indicator tells you. In addition, the TwinAir's sub-100 CO2 emissions will also save you money: you won't pay road tax or boost Boris' official coffers by paying the London Congestion Charge.

Talking of Stop&Start, another likeable touch is not only that you can press a button to disconnect it any time you fancy, but that it stays switched-out (even after you turn off the ignition) until you decide to re-activate it.

Look at the Ypsilon from behind and you'll see that it's taller than the average supermini which is, of course, good news for headroom — but is it also good news for the handling?

City-bound you'll find the Ypsilon nippy and pretty much unfazed by potholes and cracked tarmac; away from the urban sprawl it proved to be equally unruffled by winding roads with body roll well controlled. Good visibility to the front and sides makes accurately placing it on the road easy.

In fact wherever you drive it, the easy-riding Ypsilon feels refined. The steering, acceptably light for town environments (press the CITY button and it becomes ever lighter for effortless parking) is nonetheless direct and, as is needed in the cut and thrust of city traffic, its ability to quickly change direction comes in handy.

Overall the TwinAir serves up some unlooked-for fun. And with an overall length of just 3,842mm, driving and parking in town is always a no-brainer and many drivers will not need to tick the box for the optional Magic Parking.

If specified, the Magic Parking feature is easy to use: pushing the appropriate button on the fascia activates the system, which uses radar and wheel speed sensors to measure the length of empty parking spaces as you pass by before taking over the wheel to steer you in.

Other clever stuff includes the standard-fit Smart Fuel System that does away with the traditional fuel cap and prevents accidental mis-fuelling by automatically opening and closing only when the correct pump nozzle is inserted — as hard as you might try, it's impossible to pump diesel into a petrol car (or vice versa).

Every Ypsilon can also be specified with the latest and most versatile version of Fiat's award-winning Blue&Me system: Blue&Me-TomTom LIVE. Based on the TomTom Go1000, TomTom LIVE's touchscreen allows the driver (or front passenger) to manage phone calls, the media player and navigation as well as driver information.

Far more than a smart set of City wheels, Chrysler's Ypsilon supermini packs a large car feel into an ultra-compact five-door body. Upsize? Drive a Ypsilon and you won't need to! — MotorBar