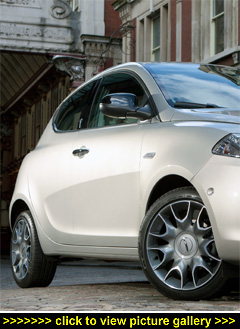 “Chrysler is now under the owner-
ship of the Fiat Group. And they have
a big job to do to regain UK customer
confidence for the Chrysler brand’s
two new model ranges, starting with
the Ypsilon supermini...”

IN ADDITION TO THE NEW Delta family hatch and Ypsilon supermini, Chrysler still has the high-profile, large Grand Voyager MPV and the striking and muscle-car-looking 300C saloon, but these models only sell in tiny numbers. Consequently Chrysler needed some volume-selling models to get themselves back into the marketplace. And quickly. Fiat's answer: re-badge the Lancia Ypsilon supermini and the Lancia Delta family hatchback for the UK.

Both sectors are highly competitive so, given the established competition, neither of these born-again Chryslers is going to become a major seller. With the Ypsilon and Delta models in the showrooms, Chrysler sold just 148 new cars in the first two months of this year — not very many at all, but still 100% more than they sold in the corresponding months of 2011.

As financially hard-pressed UK customers try to find a bargain to buy and run, the Ypsilon five-door supermini presents the best sales opportunity for Chrysler. In the tradition of the Chrysler brand, the Ł10,695-Ł15,695 Ypsilon comes very well equipped as standard.

Depending on the engine chosen, there are three levels of specification to choose from: S, SE and Limited. The choice of Fiat powerplants are: 68bhp 1.2-litre four-cylinder petrol; 93bhp 1.3-litre MultiJet diesel; and the 83bhp 'high tech' .9-litre (note the decimal point!) TwinAir turbocharged petrol unit with just two cylinders.

Because of its price, the 1.2-litre petrol unit is the best choice; the 1.3 diesel doesn't appeal mostly because it carries a Ł2,200 price premium over the 1.2 petrol and it's now made worse by the considerably higher cost of diesel fuel over petrol.

The most interesting unit is the .9-litre TwinAir petrol (which costs Ł1,200 more than the 1.2-litre petrol engine) and which also offers customers the option (£1,200) of an automatic transmission.

The turboed twin-pot TwinAir petrol engine benefits from a Start&Stop function and puts out 83bhp alongside 107lb ft of torque (from 1,900rpm). With more power and more torque than the 1.2-litre petrol unit, it will appeal despite its price premium. It's also faster, with a top speed of 109mph, and swifter — zero to 62mph takes 11.5 seconds. Officially, this unit will return 67.3mpg in the Combined Cycle. However, as has already been proven following its introduction in the Fiat 500, in real life it doesn't.

Not driving it very hard at all — just normal day-to-day motoring in town, along open roads and a short motorway journey — the best my test Ypsilon could manage was an unexciting 35.7mpg. The Official 99g/km of CO2 emissions impresses more; it means no road tax charges at all. Company car drivers will pay 10% Benefit-in-Kind tax and London drivers are exempt from the Congestion Charge.

Under acceleration the two-cylinder unit emits a unique sound — a quite appealing sort of growl that sounds sporty. Mid range, it's like a frisky puppy eager to be let off the leash and provides an element of fun and amusement.

At low town speeds in lower gears it's less happy — you need to get the revs right to get it to move sweetly towards the top end of its rev range. Once spinning, it easily hits the limiter, so you have to learn to change gear sooner than the engine note suggests you should.

Hills catch it out as well — two cylinders just don't provide enough momentum to keep the performance flowing, so liberal use of the gearbox is called for.

Drive is to the front wheels via a five-speed manual 'box — unless you want to go for the optional five-speed automated clutchless transmission.

The Ypsilon's rounded bodyshape rather resembles an egg and sits on a lengthened version of the Fiat 500 platform. There's the usual rising waistline and at the rear side this is quite extreme; combined with small rear door windows, this does limit rear-quarter visibility.

There are five doors, the rear side doors having neatly hidden door handles which helps maintain a smooth and uncluttered appearance. It looks a tall but narrow car and the height means there's too much bodyroll during cornering. It's also prone to side wind gusting and sway on motorways.

The Ypsilon's ride is firm and its suspension doesn't cope happily with the UK's damaged road surfaces. Yes, at 3,842mm in length it's classed as a supermini but I am more inclined to see it as a city car: it was certainly easier to drive and park in town than it was coping with the open road. Although it is a five-door hatch, it's pretty compact: the rear seats only offer enough legroom for children and the boot accommodates a smallish 245 litres of luggage.

However, there are no shortcomings when it comes to equipment once you move up from the base S level to the popular SE spec. It's pricey but enthusiastic buyers might just go for the Limited version. There's an extensive list of extra-cost options but, unfortunately, no spare wheel so it's an inflation kit and that, in my book, is a 'No'.

In the cabin all the instruments are housed in a very large, centrally-mounted and deep-cowled control panel that puts them out of the driver's line of vision — it also cuts into the line-of-sight of the front nearside corner for the driver. Not only doesn't it look nice, but it's not suitably placed. Beneath this central instrument panel is a high centre stack housing the heating, radio controls and high-set gearlever.

Reasons to buy 'Chrysler' include the stylish exterior, it's well equipped, and the interesting low-CO2 engine. The downsides: not as good to drive as its mainstream competitors, poor ride quality and handling, poor instrument layout, the top model is pricey and the real-life fuel economy did not come anywhere close to the official figure — actual 35.7 versus official 67.3mpg.

The Ypsilon is an important car for Chrysler but to be honest, competing against the Ford Fiesta, Vauxhall Corsa, VW Polo and now the VW Up!, plus similar sized offerings from Kia and Hyundai (and not forgetting Fiat), it just doesn't, for me, tick many ownership boxes. — David Miles