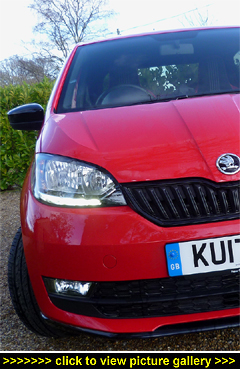 “Don’t let the ‘citi’ part of its name
stop you getting behind the wheel
of Skoda’s Citigo. It delivers a
grown-up and fun driving experience,
wears its designer-look body with
panache and it’s actually as
competent out of town as it is punting
around inside the concrete jungle...”

IN CASE YOU WONDERED, the Skoda Citigo is a triplet, being directly related to both the Volkswagen Up and SEAT's Mii, with whom it shares both VW Group parentage and the same underpinnings, and is even 'born' in the same Volkswagen plant in Slovakia. This is, of course, very good news — but even better is that out on the mean streets it's Skoda's 'baby' that's the best value.

The Citigo has picked up plenty of awards and last year was given a subtle makeover — nothing drastic because there really wasn't anything that needed improving… Certainly not the engines, which continue to be the same eager-beaver 1.0-litre three-pot petrol units with a choice of 59 or 74bhp. Titter ye not! 59bhp might not sound a lot but squeeze this particular triple's accelerator and you'll be rewarded with peppy acceleration, the kind that's perfect for taking advantage of gaps in the flux of town traffic.

Of course, ducking and diving on crowded city streets calls for more than just nerve from under the bonnet; it needs dynamic verve. And that it's got too — the handling is agile, the manual gear-change action snappy, and there's excellent visibility for the driver to spot every opening then go for it making max use of the decent grip, fine body control, and precise steering.

And if you think that stop-start London-life driving is all the Citigo does (and it does make light of it) you'd be short-changing its liking for life outside the city walls.

Set free from metropolitan restraints, the Citigo feels unexpectedly at home on faster open roads where the full set of its five well-considered ratios can be given a workout.

Neither does it feel out of its depth bombing along at the legal limit on motorways, even though the three-pot is working at twice its 'town' revs — in fact, it seems more content with the rev-counter needle brushing past the 4K mark than it does at half of that.

There's no denying that triple cylinder engines aren't as quiet as those with four but the Citigo's free-revving 999cc powerplant positively welcomes a hard taskmaster, repaying him or her with strong low-down grunt and giving its all willingly with a tuneful 'thrummy' soundtrack. It's also — and again not what most people would be expecting — unusually smooth-revving and refined, humming away unobtrusively in the background when you don't need to hurry.

While the extra horsepower of the 74bhp engine is welcome, choosing it over the 59bhp version doesn't buy you any more torque — both generate 70lb ft, so mid-range, where it's most meaningful, there's almost nothing in it although if paper figures matter to you then know that the 59bhp Citigo ticks off the 0-62mph dash in 14.4 seconds while its more powerful brother gets it done in 13.5. But given how gleefully the little 1.0-litre conducts itself, few would dare complain about its thirst — a consistent 55mpg!

We've accelerated ahead of ourselves a bit here as we haven't yet stopped to consider the Citigo's looks. Smartly well-proportioned and ingeniously compact, with room for four real-world doors despite measuring just 3.6 metres from its finned grille to an upright tail finished off with Skoda's signature C-shaped vertical rear light units.

Its wide and well-planted stance hints at Skoda's racetrack adventures (the Czech carmaker has been involved in motorsports since 1901 and has won titles all around the world — just check out skoda-motorsport.com), hence the Monte Carlo accents that feature both inside and out.

The seats are in a sports style with headrests integrated into the backrests and light but effective bolstering, and upholstered in fabric with striped centre panels. The driving position is perfect for the cut and thrust of jockeying in commuter traffic, and the wheel's perforated leather 'work' sections are great to grip.

The fascia layout works well with a single central 'island' that clusters all the controls including those for the AirCon and colour infotainment screen high on the central dash where they can be easily seen and quickly reached with minimal distraction on the move. Overall, the cabin gives off a nicely minimalist good-to-live-with ambiance, something that even the manually adjusted door mirrors can't spoil (because, let's be honest, you only need to set them up the once).

Through the upper rim of the wheel the view is of a large single-dial speedometer that's flanked by two lower-set and smaller dials for revs and fuel. A trip computer window is let into the bottom section of the speedo so all the driving information you'll need is presented directly in front of you.

Smarter Comms is something new and while the onboard Swing radio and infotainment system is good, it's at its best when Bluetooth-paired to your smartphone (docked in a stand-alone holder atop the dash) via the slick Move&Fun app — after which you'll enjoy handsfree Bluetooth, multimedia functions, can listen to your fave sounds, let your SatNav show you the way home (or anywhere else for that matter), and stay fully connected on the go. Naturally there's a USB port, Aux socket, and SD card slot.

Other kit not mentioned elsewhere includes the usual Skoda freebies: an umbrella located under the front passenger's seat, a ticket holder on the windscreen to display your parking ticket, and handy mesh storage pockets on the inner sides of the front backrests that are prefect for a mobile phone or other small essentials.

Skoda's 'City Safe' system is optional across the range and monitors the area ahead of the car, actively braking at speeds below 19mph if the driver isn't paying attention or gets distracted. And it's reassuring to know that while you're not in a hulking great 4x4 you're still safe — the Citigo has been awarded a full five-star EuroNCAP safety rating.

The Citigo's handling and ride package is well sorted. Monte Carlo versions get a lowered sports suspension set-up that gives them an edge on faster roads where they feel confidently sure-footed, riding flat and level through the twisties and gripping well in corners.

The ride seems to get better the quicker you go, even on rutted country roads and although you occasionally feel some of the bigger bumps they never unsettle the Citigo or corrupt your chosen line. The power steering is light enough to take the strain out of town driving but it's also direct and feels more weighty under load. The brakes, too, do a good job and the Citigo's stability can be exploited courtesy of the fine visibility from behind the wheel to place it accurately on the blacktop.

Those travelling in the rear cabin will be a lot happier if it's the five-door and not the three that they're in. For a very small premium (just Ł350) there's really no excuse for not going for the five-door as it also gets you a lot more usability — it's often easier to chuck things on the back seat instead of opening the boot.

This is a city car, but even so rear knee and legroom is more than okay and better than many of its rivals. The upright rear glasshouse treatment provides both decent rear headroom and a boost for the airy feel created by the good-sized side windows.

The rear windows don't drop vertically but are front-hinged and open at the trailing edge, which on the move lets in a nice stream of fresh air that's agreeably free of buffeting. For the record, the front windows are regular electric items.

Factor in nicely shaped and comfortable seats and privacy glass from the B-pillars back, and the fact that the cabin is well insulated from both road and wind noise, and it's no surprise that passengers allocated the rear seats are content to be there.

Even city-dwellers need a boot sometimes and the Citigo gives them a fair-sized one: a deep 251 litres for 'escape to the country' weekender luggage or the weekly Waitrose shop (you'll find four bag hooks on the boot sides).

If it's just you and your front seat passenger then you can almost quadruple the load space — to 959 litres — by dropping the 60:40-split rear seatbacks. While there is a step up from the boot floor, the folded seats sit flatly horizontal for easy loading through the liberal-sized tailgate opening.

You certainly don't have to be downsizing to think about getting a Citigo (although it will definitely cut your motoring costs without compromising on comfort and practicality) because as a first-rate all-rounder it's a perfect choice for those owning just a single car. There's also a lot of space within its compact footprint, and it delivers driving pleasure whether you're in town or journeying to check out far horizons. ~ MotorBar