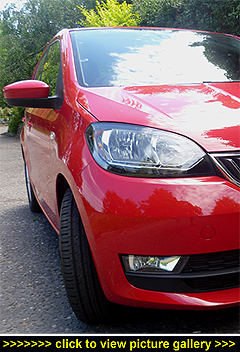 “Skoda’s CitiGo doesn’t just do
what it says on the tin but goes that
extra mile — and then some...”

WITH NAME A LIKE 'CitiGo' you'd expect it to be a polished city warrior; a whiz at carving through traffic while keeping its human cargo safe and sound and comfortably at ease, all while stretching every gallon to the limit. And it is. But, unlike many of the 'city' breed, Skoda's peppy little minx also relishes whipping along open roads and bombing down motorways.

Looks-wise the CitiGo takes 'boxy' and makes it, if not devastatingly sexy then certainly charismatic. Crowned by a lightly sculpted bonnet, the vertically-finned black grille is boldly framed in chrome and flanked by smart, cut-in headlamps underscored by daytime running lights. Its upright lines (intended to maximise interior space) are subtly masked by long side doors and windows that, in concert with minimal front and rear overhangs, accentuate the wheel-at-each-corner design. So, externally small but inside a spacious surprise awaits.

There's a definite touch of Tardis-ness about the CitiGo — opening a door reveals a much more roomy and airy cabin than the compact external footprint would suggest. In fact, once aboard you'll feel you're travelling in a larger supermini than a city car.

Added to that is the likeably minimalist architecture with straightforward displays and trad-style white-on-black dials that tell the driver everything he or she needs to know in a glance; a big 'plus' when you're fighting your way through rush-hour traffic when all your attention needs to be on what's happening outside all around you.

The manual AirCon is operated by foolproof knobs and blasts out all the chilled air you need to keep your cool during summertime in the city. While the lower trim models don't get a leather-wrapped steering wheel, the rim itself is good to hold and use. The trim plastics and switchgear are all good quality enhanced by satisfying fit and finish.

The fabric upholstered seats are lifted by patterned and textured centre panels and feature non-intrusive bolstering that still does a decent job of keeping you located. And they're comfortable; not just for short town trips, but for long-distance runs when you can escape the urban jungle for the weekend. There's also a full fist of headroom.

You'll find the CitiGo's driving position is spot-on and views out in all directions as good as it gets. Nice, too, to have roomy and shin-friendly footwells. Throw in light controls that combined with the decent driving position, excellent visibility and accurate steering, and you have a set of wheels that serves up a stress-free drive on crowded city streets.

Like every other driver you'll be wanting to be told how to get from A to B. This is your Smartphone's cue to step up. Park it in the cradle atop the dash (there's a USB socket close by to keep it charged), then using Skoda's Move&Fun app — that pairs your mobile to the Skoda's infotainment system via Bluetooth to keep you fully connected on the go — you can access navigation, media, and driving data on your phone's screen. Obviously, Bluetooth also lets you make phone calls and sync your music.

As you'd also expect, there are cupholders (at each end of the central console) and a compact umbrella handily stored below the front passenger's seat, bottle-holding door bins, and a cubby-hole ahead of the gearlever, as well as very versatile patch pockets on the inner sides of the backrests of both front seats, as well as a parking ticket holder on the driver's side of the windscreen that's as useful on this Ł10K Skoda as it is on a Ł60K Volvo!

Five-door versions provide superior versatility for not much extra money — just an additional Ł360 buys you a five-door over a three-door. The relatively long back doors open wide for easy in/out access and make loading and unloading cargo even easier when you have the rear seatbacks folded.

In passenger mode, the CitiGo's rear cabin is designed for two with, pointedly, two belts and two headrests. And those two, adults included, enjoy good footroom along with ample head- and legroom and enough 'wriggle' space despite the five-door's citified proportions measuring, as it does, a smidgen under 3.6 metres long.

Backrest angles are comfortable and rear passengers sit higher than those in front so views out to both the sides and ahead are not restricted, especially as the figure-hugging shape of the front seatbacks encourage passengers to watch what's going on ahead too. While electric front windows are standard, the rear glass is of the 'pop-out' variety (rather than conventional 'roll-downs') and hinged at the leading edge to ensure a breezy airflow that won't blow your passengers into the weeds.

Engines are naturally-aspirated all-alloy 999cc three-pot petrol units and there's a binary choice of tune: you can choose between a 59bhp or a 74bhp. Both are backed up by 70lb ft of torque, and partnered by a five-speed manual 'box.

Despite the power ratings there's no low-CO2 downside, so while emissions stay under the 100g/km ceiling at 96g/km, performance is nevertheless smooth and peppy. The three-pot is an eager-to-rev little number even in the lower 59bhp guise. And more refined than you might be expecting, with a nippy turn of speed that's perfect for exploiting gaps in the traffic as well as enough power to cruise motorways where it will canter along at the legal limit without any fuss.

On fast B-roads it also feels happily at home and, thanks to a snappy gearchange action, its 'go-get-'em' character helps serve up some authentic driving entertainment — reinforcing the old saying about decent handling, small-engined small cars being a hoot to drive hard.

More favourable news: officially good for between 50.4 and 55.4mpg, our 59bhp GreenTech CitiGo, despite being driven somewhat spiritedly for a full week, averaged a not to be sneezed at 54.1mpg. For the record, this GreenTech version comes with a stop-start system and low-rolling resistance tyres to help maximise fuel economy.

Admittedly 59bhp is a rather modest output but the lively three-pot's willing power delivery combined with the CitiGo's grown-up driving dynamics make it as entertaining to drive as your right foot dictates.

Take it easy and it's a fine all-roads car that's agreeably comfortable and quiet; press on and you'll find it well endowed with plenty of 'zip-a-dee-doo-dah' — its clean gearchange, precise steering and fine body control keeps it nimble and assured on secondary roads and country lanes, where it will quickly bring a smile to your face. And it rides well too, with a nicely-judged suppleness that benefits both in-town and open road journeys.

Not to be overlooked is the excellent visibility from behind the wheel that makes placing it a doddle, be it ducking and diving in town or manoeuvring into the tightest of parking bays. There's peace of mind too, from its Electronic Stability Control and City Safe Drive automatic city-braking. Also good to have is the standard-fit tyre pressure monitoring system.

The boot is deep and the tailgate rises high so loading is straightforward. Measuring 251 litres it's generous for a 'small' car and significantly bigger than most rivals' boots. More than enough, in fact, for a large family's weekly shop; and when it comes to holiday luggage, four medium-size wheeled Samsonite cases will fit under the parcel shelf-cum-load cover without any forcing.

On those occasions that you need more 'lugging' space there's 959 litres available once the 60:40-split rear backrests are folded flat — if you ticked the box for the optional (Ł65) variable boot floor, you will then have a practical loadbay with a seamless floor (as well as a hidden nine-inch-deep lower boot underneath). Along with bag hooks on the boot compartment sides, stretchy stowage nets are provided to keep any loose items secured.

If running costs are a priority then the CitiGo delivers; if practicality is important then the CitiGo ticks all the right boxes. But Skoda's 'city car' is more than just economical and sensible — it's an impressive all-rounder and, with prices from just Ł9K, great value. Best of all, it's satisfying and easy to live with both in, and, perhaps more importantly, out, of the city. ~ MotorBar