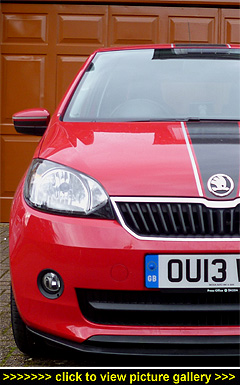 “Some cars you just can’t keep your
hands off. And I’m not talking about
Ferraris or Audi R8s; just apparently
‘ordinary’ cars that somehow hit
‘the spot’. Often they’re cars that
badge snobs wouldn’t be seen dead
in — and that’s their loss...”

TAKE THE CITIGO SPORT. Yes, I know it's from Skoda. But spend a little time behind its grippy, leather-rimmed, three-spoke wheel and you'll find yourself hooked. Yes, I know it's just a 'wee' city car… and, yes, it's only got 59bhp under its seriously striped-up bonnet. But it does come with a lowered sports suspension and a set of mean-looking black alloys which should give you some clues.

With it's cheerily in-your-face striped livery, can't-miss-me gleaming red paintwork, front spoiler, boot spoiler, rear diffuser, tinted glass and a black wheel at each corner, the uninitiated might say that there's a hint of sheep in wolf's clothing to it. Visually though you have to admit that it certainly looks the biz.

Open the door and it's obvious that, along with the welcome blaze of cheeky external styling, your Ł10K also buys you a snazzy interior — starting with the racy red, black and grey cloth seats, leather covering the three-spoker's rim, handbrake and gearknob, red stitching and a two-tone fascia.

To go with its four seats it's also got four airbags. In fact, it's best in class for passive safety, its five-star Euro NCAP rating confirmed by head-thorax side airbags (a first) for front seat occupants — these combine two airbags (side and head) into a single system that additionally helps in the event of a side impact.

Smaller passengers benefit from Isofix and top-tether fixings. Additionally, for an extra Ł180, there's City-Safe that monitors the road ahead of the Citigo at speeds below 19mph and automatically brakes for you — if you don't! — when there's a danger of a collision. Daytime running lights are also standard-fit.

The front seats are comfortable with the headrests built-in, and have nicely firm bolstering that doesn't get in the way. The driver gets a height adjustable seat and a good-to-grip leather-rim wheel that adjusts for height but not reach. Not a problem; all of MotorBar's road-testers managed to set a fine driving position.

Visibility, both to the front and sides, is very good (the short nose is a boon). Looking rearwards through the mirror is also fine plus, with only two rear passengers allowed, there's no chance of a vision-blocking third head.

The footwells are big and roomy (handy these days when large and extra-large feet are the norm) and you can really stretch out your legs if you need to. Further up your body there's plenty of elbow and shoulder room tipped off by a fist of headroom.

The dark fascia is fronted by a silver-grey panel and the instrumentation is refreshingly simple: a large central speedo flanked by a small rev-counter to the left and a fuel gauge to the right. All sport clear white-on-black markings.

The AirCon panel is set high in the centre of the dash, where it's easy to reach on the move and, importantly, non-distracting. It also shows-off some neat satin ally filleting on its controls. Heating and cooling are both fuss-free and efficient.

Space-wise, the cabin is far roomier than you'd credit for something with a city-friendly footprint of just 3.5 x 1.6 metres. As confirmed by two rear seatbelts and two headrests, it's strictly a four-seater. Access is easy though the wide front doors, aided by the 'easy-entry' fold-and-slide front seats.

Rear foot room is generous, there's enough legroom and there's room for a blockbuster novel between your head and the roof. Outer armrests are provided and it's airy enough for two adults to travel comfortably, even with a tallish driver at the helm. If you want more doors, just another Ł350 will buy you a Citigo Sport with an extra pair.

Skodas often surprise you with their clever touches so while we weren't fazed by the manually-operated door mirrors, we were momentarily caught out looking for a switch on the driver's side that would operate the front passenger's power window — in fact there isn't one; you just lean across and use your left index finger.

Talking of neat touches, you do get a handy organiser in the glovebox that includes a dedicated sunglasses pocket; and a useful mobile phone holder that can be switched around between the various cup-holders. Big, workmanlike door pockets with bottle holders also come in useful.

A smart talking point is the standard-fit Portable Infotainment Device that clips easily to the top of the dash. With its sharp 5-inch touchscreen it provides navigation, music functions, hands-free Bluetooth, and trip-computer data.

Talking of the SatNav, the MotorBar crew didn't much like taking directions from the PID's 'Henry' although the alternative voice of 'Susan' (similar to the dulcet tones of the fifty-foot 'Ginormica' in Monsters vs Aliens) got their vote. Is this a male thing, like getting a massage; guys almost always prefer a woman to a man kneading their back?

All the controls are logically sited and sitting high on the fascia the SatNav's map can be taken in with just a quick glance telling you all you need to know about where you're going or, in trip mode, how much unleaded your Sport is knocking back.

Over 500 miles our test car, despite quite a lot of zestful driving, still managed to average 56mpg. A commendable real-life result and in keeping with the official figures: 50.4 (urban); 72.4 (extra-urban); and 62.8mpg (combined). Icing on the cake comes in the form of a Ł20 annual bill for road tax.

The Citigo's boot is among the largest in its class — 251 litres, which is fine for every job from storing shopping to lugging luggage. Four strong bag hooks are also very useful. The 60:40 split seatbacks fold almost flat, creating a deep step-up from the boot floor but we transported quite a bit of household stuff and it didn't cause us any problems. And the extra 700 litres (with the seats down you have a practical 951-litre loadbay) come in very handy. No spare wheel is provided, but you do get a tyre repair kit.

There's no denying that the Citigo Sport is practical and accommodating. In terms of its 'Sport' badge, as we said at the beginning, don't let first impressions and 999cc fool you. Drive a Citigo Sport before you comment, otherwise you'll soon find yourself eating your soundbites…

Stating the obvious, the Sport was never intended to compete at Santa Pod. However, its all-alloy, 12-valve, three-cylinder 999cc engine — the same as you'll find in a regular Citigo, which means 70lb ft of torque between 3,000-4,300rpm — is a peppy little number and keen to give you every last ounce of power it can muster.

Drive it hard and it'll also sing for you — a pleasingly thrummy tune that never becomes tiresome. The manual gearbox is well matched, especially its snappy gearchange action — use it and the Sport will zip along with a dash more brio than its on-paper 0-62mph figure would suggest. One thing you can be sure of — if you're driving a Citigo Sport, you won't be a tail-end Charlie.

What makes the Citigo Sport so entertaining is not just its willing powerplant but the handling — its front-wheel drive chassis is as game as its sparky engine, and thanks to the lowered and stiffened suspension the Sport sits flat as it whisks you though bends and round corners, where the speed-sensitive power steering is keen and more than able to keep up. Grip is good, with the Bridgestone 185/55 tyres playing their part well. And when it comes to scrubbing off the speed, the strong anchors are more than up to the job.

The suspension mods haven't harmed the ride, either. The decent damping copes well with less than perfect blacktop and small potholes, and the ride — a tad firmer than a standard Citigo — is agreeable both in town, where it's an easy drive in traffic, and on motorways where it cruises along with the confidence of a much larger car.

Skoda's take on the VW Up is an excellent city car, cheap to run, and very easy to live with; in everyday use it will serve you unfailingly well. And for those times when your motoring calls for an adrenaline spike, you'll find it always ready and willing to indulge you at the drop of a gear. — MotorBar