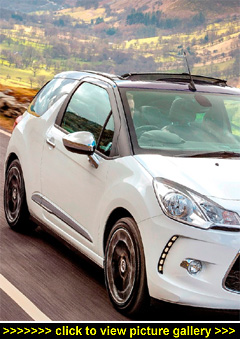 “With its quick-draw, triple-layer
roof, freezing Britain is a priority
sales market for the chic new Citroen
DS3 Cabrio...”

LAUNCHED THREE YEARS AGO, Citroen's DS3 hatchback has been a huge sales success as well as an image-changer for the French car maker — DS3 sales world-wide have topped 200,000 with British drivers snapping up 43,000 of them to make the UK one its largest markets.

In fact, sales of the funky, eye-catching DS3 have only been limited by the limit of body styles — up until now there was just the three-door hatch. Compare this to the MINI, new versions of which appear on a regular basis. Even the third member of the small 'must-have' trendy trio, the Fiat 500, is available as a hatch, convertible and also as a mini-MPV.

But times they are a' changing: you can now buy a three-door Cabrio DS3. UK sales of this racy drop-top will be around 1,200 for the remainder of this year, but over 1,500 in a full year — around 10% of total DS3 sales in this country.

In three years, the DS3 three-door hatchback — with its funky colours and wide range of personalisation options — has become Citroen's best-selling model range in the UK.

The DS3 Cabrio makes top-down driving easier and more enjoyable as its three-layer textured fabric roof can be raised or lowered in 16 seconds.

You might not guess from looking at it from outside, but the Cabrio also has the largest boot in its class: 245 litres (the MINI Convertible has 125 litres; the Fiat 500C 185) plus, unlike its two main rivals, it seats five, not four.

The most popular model, and expected to account for close to three-quarters of sales, is likely to be the VTi 120 DStyle manual at Ł17,425. Just so you know, the DS3 Cabrio costs around Ł2,600 more than its three-door hatchback siblings.

The DS3 Cabrio's electrically-operated, full-length fabric roof, plus the additional folding rear section down to the boot top, is particularly suitable for our changeable weather conditions because it can be operated at speeds up to 75mph.

Not only is the DS3 Cabrio able to carry more luggage and one more rear passenger than its MINI and 500 rivals, but it has only gained another 25kg weight over the DS3 three-door hatchback — not the usual 100kg, which means it remains agile and nimble. And there's no loss of rigidity and strength either — it's the same as the hatchback's because it retains the front, centre and rear pillars, all joined to the side and front roof frame-rails

To prove the point about rigidity and torsional stiffness, Citroen provided the top specification and most powerful THP 155 DSport versions costing Ł19,675 for the press launch.

With front-wheel drive, 154bhp and 177lb ft of torque, this amount of power and response would be sure show up any body flexing or torsional twisting during fast cornering. In reality there really wasn't any bodyshake of note.

As it happens, I also currently have a THP 155 DS3 hatchback on long-term test and the Cabrio seems to have the same strong handling credentials.

There is a bit more wind noise intrusion through the three-layer canvas roof than the fixed metal one; but not much. The ride in both the hatchback and Cabrio — in this most sporty 154bhp spec — gives a firm ride and can be 'crashy' over poor road surfaces.

This THP engine is well known; it's strong and pulls well through the six forward gears. Top speed is 132mph, zero to 62mph takes 8.2 seconds and the official Combined Cycle fuel consumption is 47.9mpg. On test, and driven briskly to sample the rigidity and torsional body stiffness using country A/B roads crossing the Oxfordshire, Warwickshire and Northamptonshire borders, the Cabrio returned 42.2mpg.

CO2 emissions are 137g/km so road tax is Ł125 a year. The insurance group is 23E but lower powered models start at 10E, with the main-selling VTi 120 DStyle manual being rated as 16E.

The folding roof, available in three striking textured colour finishes (Infinite Blue, Moondust Monogramme and Black) is quite a work of art. A push on the button takes the roof back to the glass rear window, with neat folds of fabric sitting on the rear roof spoiler. Push the button again and the rear window folds inwards onto the parcel shelf and then the roof spoiler before the folded fabric lowers down to the top of the boot lid. All very neat and aerodynamic.

The roof can be operated in three steps, from fully open to nearly closed, depending on how much fresh air is required by front and rear passengers. The only drawback is that when it's fully open with the rear section down to the boot there's no rear visibility using the driver's rear-view mirror. Citroen have included rear parking sensors to overcome this issue; and the door-mounted mirrors still give good visibility.

The boot lid itself operates in a novel way: it opens away from the car, initially vertically, and then moves up, still vertical. Access to the boot is then through a low-ish oblong opening which does restrict easy loading and unloading.

Wind intrusion or bluster into the opened-up DS3 Cabrio is relatively low — it helps that the seats are set low in the car and that the A, B, and C pillars, complete with the side roof rails, shield passengers, as too does the pop-up front wind deflector.

While you have to accept limited rear visibility with the roof fully open and low down entry to the boot, the upsides are very appealing: great style, innovative roof design that opens and closes at speeds up to 75mph, handles as well as the DS3 hatchback — and it's bigger and better than MINI and Fiat 500C soft-top competitors.

Even though the weather was freezing with plenty of snow on the ground during my test, with the heater set on 'high' the driving experience was still very pleasant, and the DS3's handling remained sharp and agile. It is certainly the cabriolet to handle our changeable and at times extreme weather conditions without fuss. — David Miles