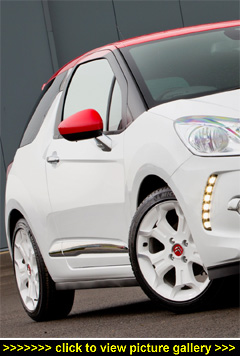 THE FUNKY AND SPORTY DS3, with its wide range of colours and options, was an instant sales hit and quickly scooped up a number of media awards. This was followed by the DS4 family hatchback with coupe styling overtones and the larger DS5, a stylish alternative to a conventional executive saloon.

It's a move that must be working as Citroen's UK new car sales for the year so far are up by 15.3% in an overall new car market where sales, mainly from private buyers, has increased by 8.8%. In fact, the DS3 is now Citroen's best-selling model range in the UK with around 15,000 a year sold here — and the recently launched DS3 Cabrio will no doubt boost sales even further.

The DS3 is Citroen's answer to the MINI and Fiat 500 — both fashionable, fun-to-own, high profile models with loads of profitable extra-cost personalisation options. But fashions date quickly and more new versions and special editions are needed to keep these 'must-haves' fresh and desirable.

The MINI range, for instance, has sprouted more new models than we can keep up with; the Fiat 500 is not far behind, with more to come. And the DS3 now has a Cabrio version in addition to the original three-door hatch and during its short life has seen a number of special editions introduced to keep the appeal strong.

At the beginning of the year Citroen introduced DS3 Red special edition models to the range, priced from Ł15,655. Other DS3 versions cost from Ł12,850 (for the 81bhp 1.2 VTi) petrol up to Ł24,300 for the 197bhp 1.6-litre turboed petrol Racing variant. There are, of course, other 1.6 petrol and diesel engines to choose from. And (depending on the engine chosen) there are also DSign, DStyle, DSport and Ultra Prestige levels of specification in addition to the Racing and Red special versions.

There are two levels of spec for the DS3 Red special edition variants. The DS3 DStyle Red is available with either a 1.6-litre VTi 120 petrol engine or a 1.6 e-HDI 90 Airdream diesel, both with five-speed gearboxes and priced, respectively, at Ł15,655 and Ł15,855.

The core selling features for the DS3 Red variants are added specification along with distinctive body colour options (Polar White or Perla Nera Black) with Red Touch interior and exterior paint highlights. The Red Touch finish includes a Sport Red coloured roof, door mirrors and front grille and, in the cabin, matching red dashboard and door handle surrounds. Matching the exterior white or black main body colour are 16-inch alloys for the DStyle version and 17-inch ones for the DSport. A space-saver spare is also included.

Having not driven the DS3 three-door hatchback since its launch three year ago — apart from the new Cabrio — I've just had a reunion with the new DSport Red THP 155 six-speed (to give it its full title) carrying a premium price sticker of Ł17,780.

On the face of it that looks costly, but in fact it's very attractive compared with its competition and, best of all, it's a bit more exclusive on UK roads than the commonplace MINIs and 'retro' Fiat 500s.

The DS3 DSport Red is certainly an eye-catcher and my test car generated lots of interest with its bright red roof contrasting against the smart black body. The black alloys set it off a treat but did cause me to take extra care avoiding the many potentially damaging potholes littering our neglected roads.

The classy interior with its mainly black trim and upholstery was certainly brightened up by the full-width red fascia and the door handle surrounds. The sporty front seats were supporting and comfortable, although the rear legroom really is minimal — even children will struggle to fit in. However the split rear seats do fold down, extending the boot from 285 to 980 litres so the DS3 DSport Red does make a versatile image booster.

The 1.6-litre THP 155 turbocharged engine comes from the family of petrol units produced jointly by PSA Peugeot-Citroen and BMW/MINI and is well known in various models. In the DS3 this THP unit with 154bhp and, more importantly, 136lb ft of torque from just 1,400rpm, is very linear and strong and serves up progressive and not at all 'peaky' acceleration response throughout the rev-range.

Yet this well-liked engine can remain docile and flexible at low speeds, even in high gears when conditions dictate. The close-ratio six-speed transmission comes with a slick gearchange.

Officially this unit will return 47.1mpg in the Combined Cycle and my test drive (during a very cold and snowy spell) logged 42.7mpg covering all types of roads and driving speeds.

The handling is agile and the steering sharp, with plenty of grip from the front wheels during cornering. The ride is firm but not too uncomfortable — however, our pitted and potholed roads do it no favours when driven at speed, and there is too much road noise intrusion. As much as I tried to miss potholes to save damaging the smart alloys, hit one and the shock unsettles the path of the car.

So, 'against' we have an at times crashy ride and road noise intrusion, and very limited rear legroom. But in the 'for' column there's a lot of good stuff including the impressive extra Red specification with eye-catching Red finish inside and out, a classy interior, and a strong engine. Plus it's roomier than a Fiat 500 and boasts much more style and exclusivity than a MINI. — David Miles