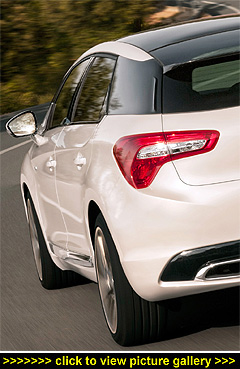 “Best known in the UK for its
discounted, fuel-efficient, cheap-
to-run small to medium cars
and strong-selling MPV people
carriers, Citroen’s larger models
have in the past been hit hard
by poor residual values because
of small sales. So how will
their new five-door DS5 executive
coupe/hatch fare?”

THE VERY ATTRACTIVE AND EXTREMELY STYLISH DS5 is priced from Ł22,400 to Ł32,200 and offers a wide range of engine options: 1.6-litre turboed petrol and diesel units, 2.0 turbodiesels, and the 2.0-litre turbodiesel-hybrid 4x4 powertrain as used in the Peugeot 508 RXH. Trim-wise, depending on the engine chosen, there is DSign, DStyle, and DSport.

Citroen in the UK estimate 85% of DS5 customers will go for the diesel engines; just 5% will opt for petrol power and 10%, mainly low tax-seeking business users, will go for the hybrids. Citroen never forecasts sales numbers, but they estimate the DS5 will see 30% of its UK sales coming from private motorists and the rest from fleet and business user-chooser customers.

The sub-100g/km diesel-hybrid DSign 4x4 variant (with its unloved electronic EGC gearbox) makes most tax sense for fleet and business users because of its 10% company car tax, its London Congestion Charge exemption, Ł0 road tax and its Ł27,600 purchase price.

However, Citroen say the likely best-selling model will be the 160bhp 2.0-litre turbodiesel engine with 2WD and the top-level DSport trim.

This version also has the option of a proper six-speed torque converter automatic transmission which, unfortunately, adds Ł1,500 to the price, making my test model a very testing Ł29,500.

The test car also carried other extra-cost options including 19-inch wheels which no way would I recommend — but more about that later...

The Citroen DS5 is a complex vehicle. On the one hand it's very good and on the other very bad. The good points include the styling, both inside and out. From the outside, its wide and fairly high stance and coupe roofline give it the look of a sports SUV crossover.

It's big and bold and the twin rear exhaust pipes, prominent cooling vents and light clusters, and showy front grille give it a powerful image. On the inside there is real design flair, and the craftsmanship is well up to its executive car status. If it wore an Audi, BMW, or Mercedes-Benz badge, we would readily accept it as a premium product.

The front passengers sit in aircraft-style twin cockpits with overhead controls and switches and twin skylight-type glass panels in the roof. The futuristic controls blend happily with old-school design touches such as the analogue clock.

Laminated side windows make it a quiet place to travel in — although I found it a bit too snug for width in the front due to the wide centre console, which is also home to copious amounts of aircraft-style switches. I'm pleased I was trying an automatic transmission model because with three pedals in a manual version's footwell, foot space would be limited.

In the rear, there's plenty of width for three people but there isn't, given the 4.5-metre overall length, that much legroom. The lower rear section roofline, giving the coupe styling, also limits headroom for tall passengers. There is a sunroof for rear seat passengers and the rear tailgate has upper and lower twin rear windows but the relatively small lower section limits rear visibility, as do the meaty rear-quarter roof pillars.

Behind the rear seats you'll find a 465-litre boot but, because the rear sill is relatively high, heavy items have to be lifted up and into the boot rather than sliding them as is the case with most SUVs or estates.

The DSport specification is undeniably comprehensive: leather upholstery, AirCon, a great sound system, electrically-operated windows and door mirrors, plus a full array of safety features helping it to a five-star NCAP safety rating.

I'm going to gloss over the engine's performance — the torquey 160bhp 2.0-litre HDI turbodiesel unit is well used and well known in Citroen and Peugeot ranges. In the DS5, with the silky smooth six-speed auto gearbox, the top speed is 132mph and zero to 62mph takes 9.8 seconds.

Officially it will average 46.3mpg and on my test 44mpg was the overall figure covering all types of conditions. CO2 emissions of 158g/km means road tax is Ł170 (company car tax is 24%).

Opting for the same engine but with a manual gearbox makes more financial sense — fuel consumption goes up to 57.6mpg and emissions go down significantly, to 129g/km; so road tax is Ł0 for the first year then Ł100 for the second year onwards with 19% company car tax. So the advice is to pay Ł1,500 less when you buy and take the manual gearbox version instead of the auto.

Whilst a stylish outside and a finely-crafted cabin with high levels of specification are sound reasons to buy, the main reason why I would not recommend the DS5 is because of its extremely poor ride qualities.

The rock-hard suspension on all models limits body roll but shocks from every bump, pothole and tarmac ripple are transmitted through the bodyshell which inevitably unsettles the handling and batters the passengers with never-ending discomfort. My test model running on a set of the optional 19-inch wheels and low profile tyres was even worse.

Good points include the glamorous and distinctive executive car styling inside and out, high safety rating, and good fuel economy.

Against? Limited rear seat headroom for tall adults, and the auto version is much more expensive to buy, tax and run. Worst of all is the appallingly hard and uncompromising ride quality, which for me ruined a really interesting and stylish executive car. — David Miles