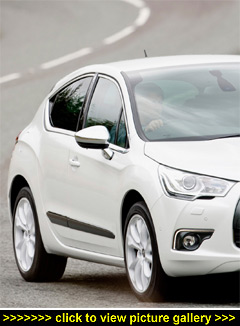 “Why own the same car as every
other driver? Dare to be different —
break out and get yourself behind
the wheel of a new Citroen DS4...”

THE MAJORITY OF MOTORISTS buy similar cars for a good reason: in these tricky financial times it makes sense to go for a mainstream model because it comes with the reassurance of proven residual values. However, there's always something new in the showrooms to tempt one off the straight and narrow. The new Citroen DS4, for instance...

It went on sale last month with prices starting at Ł18,150 to Ł23,950, and in the first month attracted 320 buyers. This might not sound a lot but it's actually a significant number, particularly as the DS4 is very much a niche product and edging into the premium sector. So far seven out of every ten DS4s bought in the UK have been diesels, with the cars going equally to both retail and corporate customers.

Now they've done the same again, this time for the relatively new, albeit very conventional, C4 hatchback range and the new 'offshoot' DS4.

The coupe-look, front-wheel drive DS4 blends practicality, road presence and sports styling and rides higher off the road than normal, so it could be classed as a crossover SUV or, equally accurately, a sports hatch. While it looks good from the outside, inside the coupe design means that rear leg and headroom isn't as good as the ample space enjoyed by front seat passengers.

Neither is access to the rear three seats easy, due to the awkwardly shaped rear door frames. And, rather bizarrely, the rear passenger door windows do not open! Understandable when you inspect the shape of the rear side windows because there just isn't enough width for them to slide down inside the door.

Another restriction is the rear tailgate — it's steeply sloped so carrying a dog, for example, in the back with the rear seats up is not really do-able either. With the rear seats in use, the boot offers a reasonable 385 litres of space — and a more dog-friendly 1,021 litres with them folded down. Another restriction is the very high rear load sill — sliding heavy items onto the load floor isn't possible and they will need to be lifted in to and out of the boot.

The old form over function comes to mind but then quirkiness always sells to those who dare to be different — empty-nesters, for instance. Their offspring have flown the coop so the rear passenger seats are most likely to be used only occasionally. And, at the other end of the age spectrum, young couples with no desire to have children will be intrigued by, and able to indulge themselves, with quirky, fashionable niche cars.

The DS4's darkly-trimmed coupe interior could be claustrophobic but fortunately the wide and deep windscreen lets enough light in; combined with the higher ride height, it also provides good visibility.

The interior of the DStyle version I tested was brightened up by the liberal use of shiny metal trim and generally looks high quality although there are some areas of hard and cheap-feeling plastic — for instance, the sun-visors. The distinctive cloth-and-leather upholstery certainly boosted the cabin ambience but numerous controls and switches are scattered around and make the fascia look too busy; and making some difficult to locate. And it's the same with the steering wheel — too many controls and buttons.

DS4 customers can choose between three trim and equipment levels — DSign, DStyle and DSport — and a wide range of engine options: 120bhp 1.6 normally-aspirated and 155bhp and 200bhp turbocharged petrol units while for diesel fans there's a 110bhp 1.6 turbodiesel (plus an eco version of the same unit with 114g/km CO2 emissions) and a 160bhp 2.0 turboed unit. There's also an electronically controlled automatic transmission option for the 155bhp petrol engines and the lower CO2 Airdream 110bhp diesels.

My test DS4 HDi 160 DStyle costs Ł22,950 and for most drivers wanting something distinctive, sporty and well equipped, it is probably the best model. The 160bhp 2.0 turbodiesel unit gives this particular DS4 the pace and driving refinement to match the image but without incurring silly levels of road tax and BIK charges.

Driven over all roads in all kinds of conditions, my DS4's test figure was a creditable and realistic 49.8mpg. Not bad at all given that the official Combined Cycle fuel consumption is 55.4mpg. Tailpipe emissions are 134g/km so you pay an annual road tax bill of Ł115. Company car users pay 19 per cent BIK tax. Insurance is also competitive thanks to a group 19 rating.

The good news is that the decent fuel consumption isn't achieved at the expense of performance — zero to 62mph is done and dusted in 9.3 seconds and the maximum speed is 132mph. Well known in other Citroen and Peugeot models, the high pressure common-rail direct injection turbodiesel has 160bhp backed up by bags of torque: 251lb ft from 2,000rpm makes it very responsive indeed. It pulls effortlessly from low speeds and will overtake slower traffic without having to change down a gear or two — just a prod on the accelerator is all that's needed. Under load the engine 'growls' — but call it 'character'.

Unlike the performance, the ride comfort is patchy; very firm at times, and it becomes unsettled over poorer surfaces. Of course, raising the suspension and adding larger wheels has firmed-up the ride over the 'featherbed' comfort served up by the C4 five-door hatchback on which the DS4 is based.

That noted, the ride is admirably flat during high speed cornering with plenty of confidence-inducing grip so the drive is just as sporty as the looks promise.

Against? Its oddball design means limited rear passenger space and non-opening rear windows, the at times firm ride, and the price premium over the C4 is too much. On the plus side, the DS4 is a distinctive alternative to a mundane family hatch and comes well equipped with a fuel-efficient and strong engine and sporty coupe looks. Tempted?

Sure, moving away from a conventional high-volume family hatch to something more daringly 'niche' like the DS4 could, in the long-term, be a bit of a financial gamble depending on the eventual residual values. However, the DS4 does offer nonconformist motorists an opportunity to drive away from boring cars. The question is, will you dare to be different? — David Miles