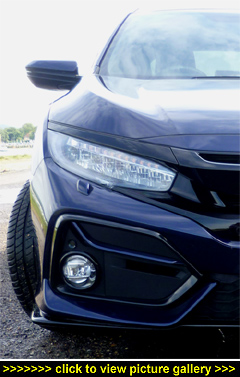 PEEL AWAY THE TYPE R'S party clothes and you'll uncover a very sensible five-door family hatchback. Where the Sport Line scores is by capitalising on this practicality and adding some rather mean bodykit flourishes including rear spoiler, full-width diffuser and unique gloss-black 17-inch alloys to retain enough of the 'R' look to create an alluring hot-hatch presence with an engaging drive — and all for Ł10K less than a stock Type R.

But what about all that glorious brake horsepower? The Sport Line's turboed 1.0-litre three-cylinder VTEC unit (the only Sport Line engine-bay choice) can't match the R's stonking 315bhp but it does punch out a game 124bhp. And, seriously, that's enough to keep things interesting — Honda knows how to make revvy engines and you won't hear any complaints when you give this eager 1.0-litre some welly. Torque is a healthy 147lb ft when paired with a snickety, six-speed stick-shifter although it's ten per cent less (132lb ft) should you opt for the alternative CVT autobox.

However, if there's the teensiest trace of petrolhead in your DNA it will be the manual you'll want because it not only goes with the driving machine ethos that characterises the Sport Line but it's also a very rewarding 'box to use, serving up mechanically tactile and spot-on accurate gear changes via a sportingly short lever with a matching short throw for track-quick sequential as well as block-changes.

Slice though the ratios and use the revs and you'll always find the 998cc motor pulling enthusiastically as it sings from the same song sheet as the chassis as the power's put down through the front wheels.

A 126mph top speed ensures effortless motorway cruising, while the official combined fuel consumption of 45.6mpg shows this racier Civic is no demon-drinker — far from it: our hard week's testing saw us record an overall average of 47.1mpg. Everyday drivers may do even better using the still-accelerative Econ mode.

The Sport Line's cabin is a focused blend of smart and sporty with supportive, nicely bolstered sport-style seats (leather clad with perforated centre panels, three-stage heating and adjustable lumbar and belt height), logical ergonomics and driver-friendly displays that combine to create a relaxed but very effective driving environment — one that goes out of its way to make the driver feel a major and inclusive part of the driver-machine partnership. The steering wheel is great to grip and use and its multifunction controls are all easily identifiable, both visually and by touch, so simple to find when moving along. In fact, everything is exactly how it should be when you're putting the pedal to the metal.

Those other prerequisites for a rewarding driving experience — a fine driving position (the driver enjoys full electric seat adjustability) and visibility from behind the wheel — are both sorted; in fact, and rather unexpectedly when assessed from outside, even the view back through the rear screen isn't hindered by the spoiler mounted across the tailgate.

Comms are spot-on and fully-specced: there's A1 SatNav with sharp 3D mapping, WiFi smartphone charging, and a seven-inch touchscreen to operate the Honda Connect infotainment and Garmin navigation system. While screen sizes, like cars, keep getting ever bigger, the Civic's seven-incher is right on the money — you can easily see everything you need to see without the dash being overwhelmed by an excess of reflective screen inches.

Spoken directions are foolproof — all you really need to know is that you'll never get lost in a Civic. Making it easy to see where you're heading when travelling backwards is a reversing camera supported by parking sensors front and rear. Naturally there's Internet browsing, Apple CarPlay and Android Auto, Aha app integration, Bluetooth and a good showing of connectivity ports.

Driver information is perfectly presented between the secondary outer dials on a central digital screen with all the essentials including a rev-counter arc plus the posted limit as well as a large and easy-to-read current roadspeed figure. It's a treat to have them both together — a lot of other carmakers only put the posted limit on their maps so your eyes are constantly flicking back to the central screen; very distracting when you're trying to stay legal while most around you don't seem to give a damn.

Sitting in the Sport Line's driver's seat you really do feel in control and at one with this Type R 'tribute band' Civic: the classic-style and perfect-in-your-palm spherical gear knob falls perfectly to hand; the fascia-mounted glowing red engine Start button is easily reached; straightforward controls operate the two-zone climate which, incidentally, is very effective whether you dial up the red or blue extreme of the temperature range. The fistful of headroom is rather unexpected given the sporty silhouette, and it's nice, too, to have some decent foot-room in the shin-and knee friendly footwell.

Neither do you do go short on in-cabin storage space in a Sport Line — the lit and flock-lined glovebox accommodates plenty of stuff but it pales in comparison with the huge storage unit in the central tunnel between the front seats that is very deep, wide and long; capped by a sliding armrest pad, it features two large individual cupholders (one of which can be repositioned at will) and a USB port. Then there's the 'hidden' lower tier at the dash-end of the centre console with open sided storage areas accessible from both the driver and passenger sides and where, conveniently, you'll find a 12V power socket, a HDMI port and two more USB ports. The roomy door bins will take a variety of items including a bottle.

Those allocated a seat in the back will have much to be pleased about in the Sport Line's rear cabin — it's one of the most spacious in its class thanks to the generous wheelbase within its 4.5-metre-long hatchback body. The soft leather rear seats are supportive with relaxing backrest angles and provide good under-thigh support; decent foot- and knee-room along with a fist of headroom seals the 'happy to travel in the back' deal.

For two, there are heated seats and a well-padded drop-down central armrest with built-in siamesed cupholders to share; three side-by-side is also an easy fit in the wide cabin. Views out are kept interesting thanks to rear passengers sitting some six inches higher than those up ahead of them, and while the privacy rear glazing doesn't restrict looking out, it does conceal those inside from outsiders trying to peer in. Also appreciated are the roof-mounted damped grab handles, bottle-holding door pockets and pair of front seatback pouches.

Most of the time you'll be running with the adaptive dampers switched off — on everyday roads you'll be served up a ride that places the Sport Line assuredly on the podium as one of the best-riding performers in its class. Not only is the well-judged ride both comfortable and composed but, unusually, it manages to serve two demanding masters — ride and handling — with equal integrity. The interior is also well isolated from both engine and external sounds, all of which makes for peaceful journeys on today's raucous roads.

The Sport Line is certainly sporty enough to justify its moniker: you can punt this Civic as hard as you like! From behind the wheel it changes direction cleanly and keenly; grip at the front-end is strong and backed-up by well managed body control it feels confidently planted. Activate the adaptive dampers and you'll instantly feel the chassis stiffen up as the handling step-ups another notch. That said, even running with the electronic dampers dormant, it's still entertaining to press on thanks to an engineered-in assurance that this Civic will always go where you point it.

Around the houses it's as fluent as you'll find it when snaking along winding country roads which is a big endorsement for what, for many owners, will also be their only family wheels. And, for the record, despite its on-paper 0-62mph acceleration time of 11.2 seconds, its revvy character and slick-change stick-shift makes it feel far livelier than those numbers suggest — if you didn't know you'd be hard pressed to guess that there's just a single litre occupying the engine bay. Taken as a whole the Sport Line is a fulfilling driving package that's impressively chuckable and rewarding to drive on all roads at whatever pace you choose.

The Sport Line's practical family hatch persona reveals itself even more when you lift the rear hatch — facing you is a large, deep, regular-shaped boot that easily trumps those of most of its rivals and which will gulp down 478 litres of luggage (550 if you load to the max). The short drop over the rear sill to the boot floor is not a problem for either everyday shopping or staycation baggage. Boosting practicality further is a large underfloor locker with a folding lid that can be set in a variety of positions to best match whatever you're carrying in the main boot.

Fold down the 60:40-split rear seatbacks and you'll open up a full loadbay of 1,267 litres with a seamless floor. A neat, compact cassette rollerblind runs widthways across the top of the boot to keep your luggage screened from prying eyes. Loading is hassle free, helped by a high-rising tailgate. Tie-down eyelets ensure larger loads stay put while lockers in the rear wings house the Civic's tools and tyre repair kit without eating into the main load areas.

The Sport Line is no pretender and doesn't really attempt to pass itself off as a full-blooded Tyre R. Nevertheless, it's a real looker in its own right and its understated presence generates an intriguing Q-car air to accompany its rewarding driveability. And for all those other days when you must rein-in your inner petrolhead, well, it's the perfect family hatchback. A classy Japanese win-win. ~ MotorBar