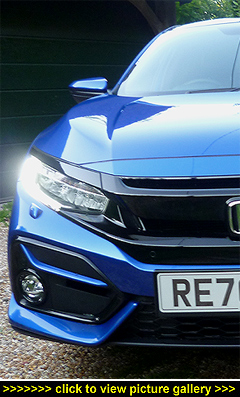 “Honda’s Civic range bucks the
‘peas in a pod’ trend of lookalike
family cars. But not only does this
boldly styled five-door hatchback
stand out from its peers, but it’s
decidedly good to own and drive...”

THE CIVIC is long established with British buyers, as much even as VW's evergreen Golf. In fact, both share a similar appeal to regular hatchback buyers; both offer quality and engineering. Styling-wise, however, they're chalk and cheese. For those who want their five-seater family car to stand out from the crowd as well as being fun to drive, it's the Civic that ticks all the boxes.

This tenth-generation Civic enjoys a strong reputation for not only its practical and oh-so-usable body style but also for serving up an engaging drive. And you get a strong sense of that the moment you swing open the driver's door and settle in the shapely, fairly low-set seat — not only is it comfortably supportive, but the driving position is decidedly sporty. The highish central tunnel, decent seat bolstering, and three-spoke great-to-grip steering wheel all boost the 'driving machine' vibe. And not only do both front seats have lumbar adjustment but they are also heated (three-stage) and, unlike many, are generous when it comes to keeping you genuinely cosy — the heat runs from your shoulder blades right down to under your knees. Perfect!

For the record the driver enjoys powered seat controls, including power-adjustment of height and lumbar support, which makes finding the 'sweet spot' when setting your driving position a doddle. Also commendable, and doing its bit for long-journey comfort, is the pedal set: neatly in line with the seat, it keeps your hips and thighs straight and relaxed. From behind the wheel visibility is first-rate — thanks to slim-ish windscreen pillars you enjoy a great view forward; large side windows ensure there are no problems when joining roundabouts or exiting junctions.

More good points: even the 'fastback' rear-end treatment doesn't restrict your views of what's behind despite the full width spoiler along the base of the screen. A rear-view camera (plus nose and tail sensors) takes any hassle of out of reversing. Another area the Civic scores highly in is ergonomics: all controls and switchgear are logically sited and easy to reach while a special mention goes to the dual-zone climate system's controls, which are of the ever-popular 'physical' variety, well-engineered, and delightfully un-distracting to use on the move, particularly at night. However, for those drivers who must finger-tap everything on-screen... well, you can do that too in the Civic.

The Civic's interior is both classier looking and easier to live with than those you'll find in many of its classmates. Whatever you touch feels of high quality and works flawlessly, and the digital instruments are deeply set to prevent reflections. The multi-configurable main instrument panel displays a large readout of your road speed along with the posted limit (also repeated on the active mapping). Most of all it's clear that Honda's interior designers spent plenty of time making sure the ergonomics were spot-on before signing-off on their work.

Also earning praise is the Civic's in-cabin storage arrangements, starting with the cleverly configured central console which not only boasts a massive holding area (and a sliding armrest) that will easily house your tablet but also contains two large cupholders, one of which is usefully repositionable. Best of all is the intriguing 'basement' storage area carved out below the selector lever offering HDMI and USB jacks with the bonus of well-planned pathways to keep wires safely out of the way. Added to all that is a big glovebox and large bottle-holding bins in the front doors.

Comms are comprehensive with must-have stuff like WiFi smartphone charging and a punchy 11-speaker HiFi with DAB radio. And while some drivers like to use their mobile's nav apps via Apple CarPlay and Android Auto mirroring (both standard-fit), the majority still prefer a 'proper' built-in SatNav. The Civic gives you one of these too, a Garmin 3D system combined with Honda's Connect infotainment software that adds Aha app integration and internet browsing.

The central seven-inch touchscreen's graphics are beautifully sharp, there are 'hard' hot keys alongside the screen for quick menu jumps, and the spoken directions are always spot-on and easy to understand. You also get voice control for the phone, navigation, music search, audio, and climate control — just tap the button on the steering wheel. Other welcome features include a stand-alone volume knob and a goodly supply of USB and HDMI jacks.

From the outside the Civic's lean lines make it appear smaller than it really is. Swing open a rear door (they open wide) and you'll be pleasantly surprised as to how much room there actually is — more than enough for a pair of six-footers to sit behind a tall driver and front passenger without any legroom issues. There's also good shoulder room plus a fist of headroom along with plenty of space for feet in the wide footwells. Thanks to the tapered profile of the front seatbacks, long and deep side windows, and the sunroof, the back cabin has a pleasantly airy feel. Views out are expansive, courtesy not just of the big windows but also because rear passengers sit higher than those up front.

Two-stage heated rear seats are also standard-fit; the seats are well padded, and backrests are set at a relaxing angle. A comfy drop-down central armrest with large integrated cupholders makes two side-by-side even more agreeable, plus there are sizeable front seatback pouches for storing personal 'stuff' and each door pocket will hold a bottle. If your youngsters require child seats, no problem: ISOfix mounting points are already in place.

Sitting comfortably is only half of it — a car must also ride well to complete the comfort equation. And that's exactly what the Civic does: rides well. Well enough, in fact, to keep both the passengers and driver happy as the trade-off between ride and handling is very nicely judged — experienced from the rear seats, the Civic feels fluent and at ease whether you're passing through townscapes or getting a move on along faster roads outside the city limits.

Whatever blacktop you find yourself driving over, everyday lumps and bumps are pretty much taken in the Civic's stride — courtesy of a well manged suspension set-up that, in the EX trim, comes with an adjustable damper at every corner. Press the electronic damper button alongside the selector lever and you can noticeably stiffen or soften the ride in an instant. Honda's adaptive suspension system is certainly no gimmick and perfect for when passengers are aboard.

As a considerate driver you may well be keen to provide the best ride for your passengers but there are sure to be times when you will want to press on. In which case a quick finger-tap on the adaptive dampers switch ramps up the Civic's agility no end. Do this on a snaking B-road and the stiff chassis and revvable powerplant will put a genuine smile on your face as the Civic's confident roadholding abilities come to the fore: the nose feels reassuringly planted, the steering precise, body movements are well reined-in, you won't run out of grip, and there's plenty of sweet, well-fettled chuckability. The brakes too, have all the well-modulated bite you'll need. The result is a rewarding and fun drive. And, despite the 1.0-litre version lacking the Civic Type R's knockout 316bhp punch, you can still experience its big brother's handling DNA.

One-litre engines have now become the norm and the sweet-natured turboed VTEC petrol engine Honda fits into the Civic is a beaut. While this willing 124bhp three-cylinder unit will take all the revs you want to dish out, you really don't need to wind it up to make meaningful progress; there's ample shove low-down and the torque is spread broadly so it feels surprisingly punchy any time you press down on the accelerator — getting off the line to 62mph takes a perky 11 seconds.

Driven normally, the three-pot is a quiet, relaxing and economical companion that's totally at ease in everyday traffic and cruises motorways with aplomb. Top speed on Continental motorways is 124mph. The transmission can be either a six-speed stick-shifter or Honda's own seven-speed CVT autobox with paddle-shifters for those times you want to take personal control over the change-points and a Sport mode for injecting some extra brio into your drives.

More good news: officially you can expect to see 42.2mpg if you choose the CVT (45.6mpg for the manual). Emissions come in at a commendable 107g/km. A week's hard driving with MotorBar saw a real-world 42.7 recorded (with just token use of the Econ mode) so consider that a very good worst-case figure.

A big boot is hard to beat and at 478 litres (or 550 if loaded to the roof) the Civic's trumps most rivals. To be specific, its deep boot swallows around seven good-sized suitcases stowed to the window line. When the tailgate is raised (it opens high) you're presented with a wide aperture that offers easy access. The boot floor is low and a breeze to load. Other handy features include a multi-positionable folding boot floor and a 12-volt socket.

A noticeably clever touch is the load cover blind — instead of a regular full-width roller blind that moves backwards and forwards, the one in the Civic is housed on a small cassette sited on the right-hand side of the boot and extends across horizontally from one side to the other. It takes up hardly any room and can be left in place when not required with no luggage penalty.

Whenever you need to make the most of the Civic's carrying capacity, dropping the rear seatbacks opens up a 1,267-litre loadbay. You also get a convenient deep storage bin below the floor. The 60:40-split rear seatbacks fold down flat and when folded there's a gently upward sloping 'ramp' between the boot and the back edges of the folded seats that makes it easy to slide heavier items over when loading to the max.

Satisfying to drive? Yes. More comfortable than most of its rivals? Yes. Loaded with kit and more safety tech than you can shake a stick at? Yes. Yes. A family-favouring number of seats and a boot to match? Yes. A peppy and economical engine? Yes. Whatever you ask, this Civic just keeps on saying Yes; and all these yesses add up to one of the best family cars you can buy and a convincing all-rounder that's oh-so-easy to live with. ~ MotorBar