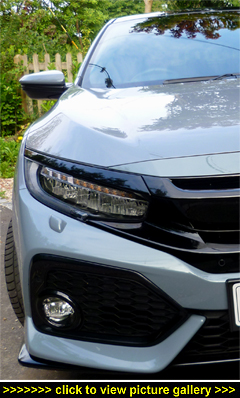 “Whoever would have believed
that a grey-and-high-gloss-black
livery could endow a family hatch
with the double-take presence
of a supercar? Just take a look
at the new Civic from Honda and
see for yourself...”

CALLED SONIC GREY PEARL, it's a fabulous colour and generated plenty of flattering comments wherever we parked 'our' Civic. Its wider, longer coupe-esque body with strongly defined flat-cut wheelarches, low nose bracketed by oversized five-sided air intakes, glossy black sports bodykit and, at the tail, double tailgate spoilers and central twin-pipe exhaust, blended with a 'well planted' deportment, all helped of course, combining to give it a seriously 'sporty' bearing.

Make no mistake, this is no longer the Civic that has for a long time now been everyman's family five-door hatch — this all-new (and it really is) tenth generation version indisputably moves the Civic onwards and upwards.

At this time of impending EU meltdown it's also comforting to know that the Civic is made here in the UK, at Honda's Swindon manufacturing facility. So if the Bullies of Brussels want to throw all their toys out of the pram, we Brits won't be going short of first-rate cars to drive.

Engine choices will appeal to both petrol and diesel camps, with a choice of two turboed unleaded drinkers and one oil-burner: for the petrolheads there's a 127bhp 1.0-litre three-cylinder or a 180bhp 1.5-litre four-pot, while diesel fans will be pleased to see a 118bhp 1.6-litre in the engine bay.

As impressive as today's three-cylinder units undeniably are, the lure of 179bhp along with an official combined consumption figure of 48.7mpg running with a six-speed manual gearbox (46.3 with the auto) makes the 1.5 a no-brainer, especially as that brings with it a 137mph top speed and off-the-blocks acceleration to 62mph in 8.3 seconds.

For the record, if you want to better our week's test average of 46.4mpg then you could try pressing the Econ mode button and leaving the engine stop-start switched on, and taking note of the fuel efficiency status strip built into the upper edge of the rev-counter housing. Do so and you won't notice any drop-off in driveability but you may notch up a few more miles per gallon. Us? Well we just like to have fun…

As we've mentioned engines we might as well talk about the new 1.5-litre turbo unit — it's revvy but tempered by a well modulated delivery that makes it eager from pull-away, serving up an energetic turn of pace in the mid-range where most real-world driving gets done. That said, it's a Honda so will go on until reined-in by the limiter.

On paper the 0-62mph dash is down as 8.3 seconds but in real-life the 177lb ft of torque on tap makes it feel a good half a second quicker. Keen drivers, especially those with family chores, certainly won't feel they're missing out by doing their 'civic' duties. On long trips all aboard will appreciate its ability to cruise tirelessly and serenely (actually, it's very quiet inside whatever your speed).

Before getting into the whole driveability and dynamics thing, a quick look inside the cabin will set the scene. Bigger, they say, is better — this new Civic certainly bears that out. Trim materials feel more expensive to the touch and fit and finish definitely earns an 'upscale' tick. Plus, fitted into the generous cabin space are some shapely seats. And, enhanced by effective but not 'pushy' bolstering, we're talking the kind of shapely that sees you arriving at the end of a long trip as fresh as when you first set out.

There's no skimping on the three-stage heated seats either, which warm you from under the thigh all the way to mid-back. Both also provide powered lumbar adjustment that along with height adjustable seatbelts and generous headroom ensure that both the driver and front passenger will indeed be sitting pretty.

The new Civic's cabin is genuinely welcoming, blending eye-pleasing architecture with a stylish mix of finishes including carbon-fibre-effect dash and door inserts, smart black fabric upholstery with contrasting slim, diagonally-striped central strips and subtle contrast stitching. Satin and gloss black and gunmetal silver highlights are used tastefully on the multifunction steering wheel, which also has a great-to-grip leather rim with a palm-friendly profile.

The instrumentation is equally likeable with a brilliantly clear 'dial' set — the digitally generated (on a colour TFT screen) central rev-counter features a large white-on-black speed readout within its arching scale. Below the digital speed is a strip of driving data covering audio, apps, turbo boost, compass, speed limit, rear seatbelts, oil level/change, music, smartphone, range, mpg, etc). And so there can be no mistakes, the posted speed limit is shown not only in the top left-hand corner of the instrument panel but also on the delightfully crisp mapping on the infotainment screen above the centre stack.

Added to that, all the switchgear is in its rightful place; the Civic's information interface display is not only refreshingly straightforward, but the driving data is easy to take in night and day. All dashboards should be as foolproof as this!

Drivers will also appreciate being able to press the 'climate' button for an instant menu jump to the touchscreen for fingertip adjustment of the 2Zone climate control system; or they can do it manually using the traditional knurled knobs and switches set immediately below the 7-inch infotainment display, all in the driver's eye-line to make them safe to use when driving.

From the driver's seat visibility is first rate: one can see the front wing tops and bonnet, making the Civic very easy to place on the go. And, with keyless locking and starting, getting in and getting away is equally simple: thumb the glowing red Engine Start button on the right-hand fascia, select a gear and drive smoothly through the no-hassle electric parking brake (there's also an auto-hold function that's handy in stop-start traffic).

Something else — the clean-changing manual gearbox's lever is short and perfectly to hand, and its spatial relationship to the steering wheel and alloy pedal set can't fail to remind you of Honda's F1 credentials; as does the engine's 8,000rpm redline. Also, just aft of the gearlever is the button for the adaptive damping — trust us, you'll enjoy getting acquainted with that too!

'In-flight' storage is accommodating in the extreme with really big door pockets and between the front seats a long, deep bin large enough for a cat to happily sleep in (ours actually did, admittedly when we were parked in the drive!); a sliding cloth-covered armrest masks it when necessary, plus there are repositionable dual-use cupholders and a well-thought-out 'lower deck' to the central console offering additional storage accessible by both the driver and front passenger with 12v power, HDMI and USB ports.

The benefits of the new Civic's longer wheelbase are felt most in the back cabin where there's plenty of room for feet and legs (and some pre-nap stretching) as well as a fist of headroom. Well-positioned outer armrests and a nicely padded drop-down centre armrest (with built in cupholders) along with relaxing backrest angles and very comfy seats make it easy for those travelling in the back to make en-route excursions to the Land of Nod.

While carrying five is not the norm, the Civic will oblige and three side-by-side is doable with no complaints likely to be heard from the one in the middle. Accommodating pockets on the front seatbacks and genuine bottle-holding door pockets help make life in the back that little bit more civilised.

Sport Plus versions of the Civic come primed to tango, their footwork boosted by adaptive dampers at each corner that provide quick-acting and single-minded body control, particularly when spearing corners and flowing through Esses on fast A and B roads.

When you then factor in well-judged steering and reassuring grip, plus the Civic's ability to carry speed and remain composed when pressing on (plus fine brakes to mediate fluently between 'fast' and 'slow'), you have a sound recipe for driver satisfaction — notably so when driving solo!

But the handling doesn't steal the limelight because the Civic rides as well as it parties, with excellent 'bump-thump' absorption at the heart of its fluent ride. Again, thank those adaptive dampers. Press the button behind the gearlever to activate them and you'll feel the ride and the composure step-up; but not at the expense of the suspension shrugging off larger imperfections beneath the 235/45 Michelins; even mid-bend, the Civic won't easily be deflected from your chosen line.

If occasional cargo space is important to you then go for the range-topping Prestige trim as then you'll get a 478-litre boot with the rear seats in use and an 828-litre loadbay with them folded down. Sport and Sport Plus models come with a few litres less — but a still-practical 420 and 770 litres.

How so? Believe it or not, it's down to those good-looking central twin exhaust pipes. Whatever, both offer a good wide and deep boot and a large tailgate opening to load through along with a versatile and seamless flat floor in loadbay mode. A novel (and effective) touch is the mini-cassette luggage blind that pulls across from one side of the boot to the other, and which can be removed and stored in a jiffy. And good to see an effective rear wash/wipe — this is the UK after all.

Not that long ago there was no such thing as a car that was good for, and good at, everything. Today, the refined, thoroughly-equipped and economical Civic hatchback pulls off that tricky trick, mixing and matching people and cargo whilst also satisfying keen drivers with family duties. And it still manages to turn heads! ~ MotorBar