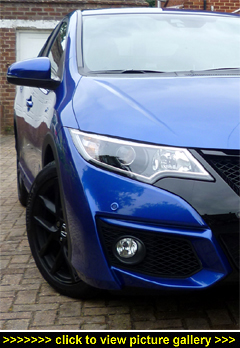 “Think of the Civic name and it’s
easy to think of the hard-charging
range-topper, the Ł30K Type R
version that in turn prompts thoughts
of Honda’s racing pedigree...”

THE INTRODUCTION OF THE NEW SPORT model, while sitting squarely mid-range in the five-door family hatchback Civic line-up, brings a tangible intimation of the Type R's cachet thanks to some sporty styling touches.

These include 'blacked-out' rear door and tailgate glass and more black in the shape of the wedgey double grille treatment flanked by sculpted headlights with sleek and strongly-delineated daytime running lights.

Wheelarches are strongly defined; the powerful, bunched haunches remind you of a big cat ready to pounce. The back is no less eye-catching with its mid-screen rear spoiler linking stand-out rear light units above a high-gloss diffuser but, tantalisingly, no visible tailpipes.

Finishing the sporty road presence effect with a flourish are 10-arm 17-inch alloy wheels finished in track-suggestive black along with gleaming Brilliant Sporty Blue metallic paintwork. Yes, it's actually called that, which is exactly how you'd describe it — not surprisingly, during our week with the Civic we received compliments on the colour every time we stopped!

Adding to the Civic's appeal are the prices — these kick-off from Ł16K for the entry-level (S grade) petrol-drinking 1.4 i-VTEC with the larger petrol-engined 1.8-litre Civics costing up to Ł27K. In between is the 1.6-litre powered by Honda's impressive all-new 1.6-litre i-DTEC twin-mode turbocharged diesel engine.

The 1.6's initial boost mode delivers low-down torque until the right revs when a more powerful secondary mode takes over to invigorate mid- to top-end performance. Back-stopping the 118bhp (120hp) is a muscular 221lb ft of torque on tap from 2,000rpm.

But it matters not one jot that some other engines deliver their maximum torque from a few hundred revs less because this 1.6 turbodiesel is a nicely refined unit that doesn't shout when going about its business, and is smoother and more efficient both economically and emissions-wise — officially it can return 76.3mpg in the combined cycle and its 94g/km of CO2 slips in under the road tax-triggering 100g/km ceiling, so no road tax.

Also keeping running costs low is the turbodiesel's fuel economy — a week's keen driving on all sorts of blacktop including quite a lot on demanding country roads saw an overall 57.7mpg with a regularly repeatable 72mpg on motorways! Best of all, you won't have to drive like a saint to duplicate these figures. Incidentally, driving in the Eco mode doesn't seem to make the Civic any less feisty.

There's an immediately-felt 'sporty' ambiance to the Civic's cabin that registers the moment you swing open a front door; it's full of subtle markers like the high-set gearlever with slim gearknob that fits the palm naturally, and that's very close to the meaty and grippy matt-finish leather wheel rim with its good thumb cut-outs and stylish gloss black multifunction button surrounds.

A trio of dials are set in individual nacelles (the larger central one with a rev-counter and shift prompt), and there's a wraparound panel in the upper fascia ahead of the driver with a forward instrument display: a large, digital speed readout (white figures that are clearly visible day, night and even in bright sunshine) with customised driver information to its left.

The driving position really is spot-on with A1 visibility to the front and through the deep side glass — and even through (although you might not think so if you've only looked at the Civic's 'fastback' tail from outside) the two-section rear screen; the door mirrors also provide first class views and that unmissable rear spoiler could make it tricky to park if it weren't for the rearview camera and sensors.

The well-shaped front seats, trimmed in a smart-looking soft textile material, are as comfy, accommodating and as supportive as they look; their effective bolstering is not at all intrusive but works well, plus there's decent built-in lumbar support — much appreciated on long trips. It's roomy too, with a full fist of headroom, decent elbow and shoulder room, and plenty of space for man-sized feet — and your front passenger can really stretch out without eating into rear cabin legroom.

The touchscreen is neatly integrated into the central fascia for straightforward access of all the infotainment features with plenty of apps and widgets covering browsing, Aha radio, downloads, Honda app store, phone, audio, Bluetooth, WiFi, camera, etc. As important as connectivity is physical comfort and the excellent climate system will keep you chilled-out on the hottest of days.

Nice touches include a well-sited left-foot rest for long cruises, the fact that if you like fresh air you can enjoy driving with the windows down (not something you can do in many cars today), the sturdy 'trad' handbrake — the type most drivers still prefer, real-world in-cabin storage including the large, lengthy, bottle-holding front door bins as well as the gratifying sound the doors make when they close that reminds you that Honda doesn't just build cars; it engineers them.

Underscoring the Civic's 5-star EuroNCAP safety rating is a full set of airbags, tyre deflation warning, anti-whiplash front head restraints, and a stability control system along with that other essential for our unpredictable UK weather — a rear wash/wipe.

Honda's City-Brake Active system is fitted as standard across the range. However, if you want a Garmin navigation it's a Ł610 option although if you buy a SR or EX-Plus model at the top of the trim ladder it's already included.

Travelling in the back is no hardship as despite its coupe-look roofline there's a fist of headroom. The seatbacks are set at a comfortable angle and there's a decent amount of foot room that, courtesy of a low floor 'tunnel', means three sitting side-by-side in the back is very doable. Bottle-holding rear door bins are another 'plus', as too is how easy it is to get in/out even in tight parking spots.

While there's also a Touring estate version, the hatchback (at just an inch short of 4.4 metres nose-to-tail) is perfectly capable of serving two masters — as a 'people carrier' it will accommodate five; as a load-lugger it comes with a large 477-litre boot; fold down the 60:40-split back seats and you'll have a 1,378-litre cargo hold with an all-of-a-piece loadbay floor that can be loaded easily either through the rear doors or from the high-opening tailgate.

There's additional storage (full-boot-width and some six inches deep) beneath the main boot floor. The rigid luggage cover is lightweight and easily removed, and you'll find a tyre repair kit in the side-pocket.

The icing on the cake is the Civic's incredibly useful and aptly named 'Magic Seat' system — the back seat bases fold-up vertically and can be locked in place against their backrests in a single-handed action that takes all of a couple of seconds and creates a versatile full-cabin-width storage area perfect for taller items. More 'magic' is that while being used by passengers, squashy bags can be stored beneath them.

Civics put down their power through their front wheels via a slick six-speed manual gearbox, and making the most of this is a 'faster', more responsive steering set-up. Complementing the steering upgrade is a retuned front and rear suspension that not only significantly improves the handling but also the ride, which on previous models could at times be too much on the firm side. Now it's noticeably more supple — as befits a car built in Britain (at Honda's Swindon plant) and that's clearly tailored to suit our demanding British blacktop.

The Civic handles as well its thrusting lines imply — it's as enjoyable to punt about as it is to just plain pootle. If you're pressing on, you'll find the engine, with its 221lb ft of torque, a willing and well-matched partner to the slick, clean-changing six-speed manual 'box. It rides well too, and brakes and steers competently; in fact, whatever you ask of it, it does without fuss.

Conspicuously much improved in all areas, economical to run, highly specced with up-to-the-minute connectivity features and powered by a lively diesel engine, the latest Civic has more than enough charisma to make it a justifiably good choice against a Golf or Focus. Good on you, Honda! ~ MotorBar