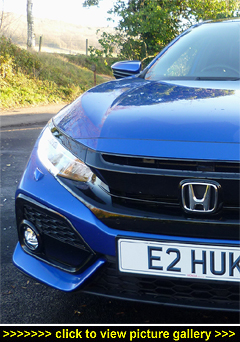 “Great to know that even if we fall
out big time with Europe we won’t
go short of desirable cars to drive —
for a start, Honda’s new Civic
hatchback is Built in Britain...”

THIS VIRILE NEW CIVIC is clothed in a smart and sassy bodyshell with strong hints of its range-topping and decidedly more brutal big brother, the 320hp Type R. Seen from any angle it's attractively 'fit' with a strong hint of a coupe about it.

Boldly emphasised 'swoopy' front wings and muscular rear haunches are enhanced by aero fins and standout faux air intakes at each corner that infer a ready-for-the-track persona. Sleek headlights merge with the slim, full-width, high-gloss black upper grille while at the back the steeply raked tailgate is topped-off by a roof spoiler above a screen-crossing spoiler bridging the striking arrow-shaped tail light clusters. You can look but you won't find another mainstream five-door hatchback that looks as sportingly athletic as this new Civic.

This latest 'Generation 10' five-door, five-seater Civic offers an engaging choice of powerplants: 129hp 1.0-litre petrol, another petrol of 1.5-litre capacity with 182hp, and the Japanese brand's latest 120hp 1.6-litre turbodiesel. And each can be had with either a six-speed manual or CVT automatic gearbox.

While it's true that oil-burners have taken a hit because of the Dieselgate scandal, not all diesels are tarred by the same brush. Honda's latest 1.6-litre turbodiesel has a lot going for it, not least the headline 80.7mpg for the official Combined Cycle and CO2 emissions of just 93g/km.

A week's hard driving saw our Civic record an overall average of 56.9mpg. Few would, or could, quibble with that — and it's very likely some will do even better. For the record our near-60mpg was achieved without pressing the Civic's Econ button to maximise fuel economy.

Also built at Honda's UK Swindon Plant, the 1.6-litre four-pot's turbocharger has been engineered to minimise turbo lag and the unit also benefits from a nitrous oxide converter to reduce emissions. It kicks out 118bhp (120hp) backed by a meaningful 211lb ft of torque that makes it agreeably lively or, if you're just pootling, relaxingly easygoing. Not that you need to hoof it very hard because the 'grunt' delivers easy pull both low down and mid-range. Zero-to-62mph takes 10.2 seconds and the 1.6 tops out at 125mph.

Make full use of the well-oiled six-speed manual gearbox and you'll get to hear the engine growl as you slot precisely through the gears — that's about the only time you will, which is good news especially when you're cruising motorways in the top two 'overdrive' ratios.

The cabin also hits the mark — it's well designed with a sporty theme and nicely put together. As you'd expect, the sloping centre stack is topped by a 7-inch touchscreen for the infotainment and SatNav (a foolproof Garmin system with crisply defined graphics) while the driver's TFT instrument panel displays a central rev-counter scale band arced over a digital speed readout flanked either side by neat bar graphs for temperature and fuel. Another essential, and shown close by the digital speed readout, is Traffic Sign Recognition which keeps you posted as to the prevailing speed limit.

Honda Connect is on hand to keep you in touch with the all-important www along with Apple CarPlay and Android Auto and Aha app integration. There's also an 11-speaker HiFi, DAB radio and Bluetooth connectivity along with ample USB and HDMI sockets.

Controls for the very efficient 2Zone climate system sit below the infotainment screen so adjusting the temperature is easy and non-distracting on the move. Fans of 'real' air can get their fix by pressing the one-shot button to open the tilt-and-slide sunroof (for those who don't do rays there's a blackout sunblind).

Ahead of the gearlever is a tray where your smartphone can be wirelessly charged as you drive while south of the stick is a wide and commodious storage bin with a sliding top and multi-configurable cupholders. The damped, lined and lit glovebox, and the door bins are all, thankfully, designed for the real world.

Physically there's plenty to like in this Civic's wide and roomy cabin, not least the well-shaped and comfortably-bolstered front seats skinned with soft perforated leather, with three-stage heating and powered lumbar adjustment.

The driving position is first-rate and agreeably sporty without visibility being sacrificed — the bonnet and front wing-tops can clearly be seen from the helm. The controls and switches on the multifunction steering wheel are well-thought-out and easy to identify visually as well as by feel. On the move the Civic is also pleasingly quiet and its upscale ambiance is more like that of a larger and more expensive five-seater.

All Civic's major on kit but the top-level EX has it all. In addition to that already mentioned you get smart entry and push button Start, a rear parking camera and front and rear parking sensors, heated powerfolding door mirrors, electronic parking brake with brake hold, electric windows front and rear, alloy pedals, privacy glass, rain sensing wipers and dusk sensing headlights, adaptive suspension, and a set of 17-inch alloy wheels.

Commendably Honda fits — to every grade of Civic — a wide-ranging active safety suite that utilises both camera and radar technology to monitor the Civic's surroundings and help keep you safe and sound.

Called 'Honda Sensing', its features include Collision Mitigation Braking with Pedestrian Detection, Forward Collision Warning, High Beam Support, Intelligent Adaptive Cruise Control with Cut-in Prediction (with cruise active, this predicts when someone will cut-in ahead of you, and to compensate slows down ahead of time), Intelligent Speed Limiter, Lane Departure Warning with Road Departure Mitigation, Lane Keeping Assist, and Traffic Sign Recognition.

A lighter, stiffer all-new platform with adaptive dampers and a multi-link rear suspension that benefits the ride as much as it does the handling, itself enhanced by a low centre of gravity, makes it, if you're in the mood, a capable charger on quick A- and B-roads. And brings home the realisation that this everyday Civic shares the same DNA as its hard-charging Type R big brother.

The high-geared steering is quick and the rest of the car is always keen to follow the line its driver has set. Tidy body control allied to decent grip levels combine to generate a 'planted' feel through the twisties. All in all it's a successful recipe for a satisfyingly focused drive. The ace up its sleeve is that it's also perfectly at ease playing the bone fide family hatch.

Despite its sporty outer shell this latest Civic is no track-hard teeth-rattler. In truth, without compromising its handling ability and taut body control, the ride is surprisingly smooth and cushioned over battered tarmac and reassuringly stable when cruising. Set to their softest setting the top trim EX model's adaptive dampers make the Civic particularly fluent.

While the 4.5-metre-long Civic is one of the most spacious five-door hatchbacks in its class, you might presume that its rear screen angle would steal headroom from passengers travelling in the back — it doesn't. Those lounging in the comfy back seats enjoy plentiful space with especially good legroom (that easily beats that offered by most of its rivals), all of which makes the five-seater Civic a class act when it comes to playing the family hatchback.

There are Isofix points on the rear outer seats for those with children; for those regularly carrying four adults the optional Tech Pack (Ł600) adds heated rear seats (as well as wireless phone charging, LED headlights with washers, and LED foglights).

The Civic also provides a real-life boot for it driver and four passengers. With the rear cabin given over to carrying people, the boot will swallow an impressive 478 litres of luggage (550 if you load to the roof); however, fold down the 60:40-split seatbacks and — ta-da! — an über-usable seamlessly floored loadbay appears, offering a maximum 1,267 litres to carry whatever you please.

A brilliant touch is the mini rollerblind luggage cover that runs side-to-side instead of north-south. Removed, it's barely any bigger than a furled compact brolly. Also, under the fold-up boot floor is a decent-sized lined well that's useful for oddments to stop them rattling around in the boot. The boot floor can also be folded in half and set in an upright position to effectively partition the boot widthways, with the uncovered well adding extra height. All very simple and versatile.