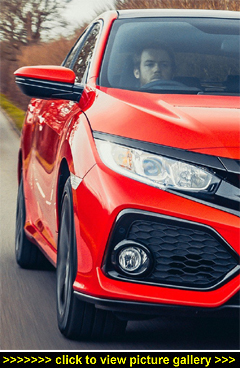 “Drawing up a shortlist for a new
family car? Be sure to add Honda’s
latest and decidedly dashing Civic
5-door hatchback...”

BECAUSE THIS SLEEK AND SPORTY-looking 10th generation version is lower, longer and wider, with a more dynamic suspension set-up that pitches it well against other family choices on offer from the likes of Skoda, Vauxhall and VW.

It also comes dressed to impress with a surprisingly sexy body for a family hatchback. Whichever angle you view it from it looks good with a strong family resemblance to the Civic range's 169mph 'bad boy' — the Type R.

You'll certainly look twice at this Civic thanks to its suggestive trackday-emulating looks, fronted by flowing front wings, sleek headlight units and a thrusting bonnet. The tail is equally out of the ordinary with strong rear haunches, tastefully done faux air intakes at the corners topped by a raked tailgate, roof spoiler and standout arrow-shaped rear light clusters underscoring its coupe-like rear styling. Few five-door family hatchbacks are quite so visually pleasing.

You can have it with petrol or diesel power: unleaded fans get to choose between a 1.0-litre with 129hp or a 1.5 with 182hp; turbodiesels are of 1.6-litre capacity and partnered with either a six-speed manual or a nine-speed automatic 'box.

While the petrol engines boast more 'horses' in the corral, the 118bhp turbodiesel trumps them with its superior torque — 221lb ft against their 132 and 162lb ft. The four-pot diesel unit punches out all you really need: a 124mph top speed with the benchmark 0-62mph clocked in 10.8 seconds. For the rest of the time it's agreeably lively and serves up more than satisfactory 'pull' from low-down to remain nicely tractable in traffic as well as on A- and B-roads.

If you prefer a two-pedal transmission, you'll find the automatic version to be an obedient and agreeably smooth CVT that, using the wheel's paddle-shifters, effectively mimics nine stepped ratios. More good news: it's also drone-free at high revs — some CVT gearboxes can 'hum' irritatingly when cruising, but not the Civic's.

It's also satisfyingly good on the fuel — officially the combined figure is 68.9mpg (along with a low 109g/km CO2, the turbodiesel also uses a converter to reduce nitrous oxide emissions) and during our week with the auto it averaged a worthy 48.7mpg (and we barely used the Eco mode). We're no molly-coddlers when it comes to economy so the average owner is likely to regularly see 50+mpg.

This Civic is lighter and sits on a stiffer, all-new chassis with a multi-link rear suspension and adaptive dampers with benefits for both the ride and the handling. The result, particularly on quick secondary roads, is a composed car with decent grip that steers accurately and stays level through the twisties. All-in-all, it's a recipe for some of the fun stuff in addition to the sterling family hatch services it delivers day in, day out.

With standard-fit (on EX grade models) adaptive dampers the Civic serves up an unruffled ride that, both around town and out on the open road, accommodates bumps and blistered blacktop without any fuss. If you're feeling sporty you can always press the button on the centre console to revert to a firmer handling-biased setting. Whichever mode you favour, the Civic travels along motorways with equal reassurance. Adding to its relaxed manner is a quiet cabin that's reminiscent of a bigger and more expensive five-seater from the class above.

The cabin is as smart as the bodyshell wrapped around it — and a satisfying place to spend time wherever you sit. The sporty seats, upholstered in soft leather, are well-shaped with nicely holding but not pushy bolstering; thigh support is good and three-stage heating can be taken for granted, as too can power-adjustable lumbar support, while the headrests can be 'clicked' through five settings for that perfect fit.

For the driver it's a great environment with a first-class driving position easily set that feels sporting while still letting you see the bonnet and front wing-tops from behind the wheel, as well as what's coming up behind you; the rear camera also offers you a choice of three different views.

The three-spoke steering wheel is good to grip with well-thought-out and easy to identify (visually as well as by feel) multifunction controls and switches around the boss and, an important 'plus' for comfort, you can drive without twisting your hips because the pedals line up properly with the driver's seat, making long-distance journeys that much better. The two-zone climate controls (traditional rotary knobs and switches) are easy to use on the move with minimal distraction. Real fresh air can be accessed by pressing the one-shot button to open the tilt-and-slide sunroof (a blackout sunblind is also on hand to keep out the dazzle).

Instrumentation is spot-on with a digital panel showing a half-moon rev-counter along with a speed readout and arced bar graphs for fuel and temperature. All faultlessly logical with a kind-on-the-eyes blue-and-white palette that makes it easy to read both day and night. Another must-have is Traffic Sign Recognition to keep you posted of what speed you should be doing! Helpfully, it's shown close to the digital speed readout.

The biggest shock when getting behind the Civic auto's wheel for the very first time is the selector lever — or the lack of one! In its place is a set of buttons: Park, Reverse, Neutral, with another for Drive/Sport. Actually, the whole thing's a doddle to use.

The sloping centre stack holds a seven-inch touchscreen for the infotainment that includes a foolproof and intuitive Garmin SatNav; the graphics are crisp, and the colour-mix well-judged. Honda Connect makes it easy to stay wirelessly wired with the worldwide web via Apple CarPlay and Android Auto (the Aha app is also integrated). For traditional entertainment there's a respectable 11-speaker HiFi and DAB radio plus Bluetooth connectivity along with a good supply of HDMI and USB sockets

Nice, too, to find plenty of real-world storage areas in the wide and roomy cabin for all your 'pocket lint', including bottle-holding door bins as well as a genuinely capacious centre console box with multi-configurable cupholders capped by a sliding armrest. The damped glovebox is also of a usable size and lit and lined and there's a handy out-of-sight lower storage area with HDMI and USB sockets below the centre stack.

Honda equips every Civic with its 'Sensing' suite of active safety systems. These include Collision Mitigation Braking with Pedestrian Detection, Forward Collision Warning, High Beam Support, Intelligent Adaptive Cruise Control with Cut-in Prediction (with cruise active, this predicts when someone will cut-in ahead of you and, to compensate, slows down ahead of time), Intelligent Speed Limiter, Lane Departure Warning with Road Departure Mitigation, Lane Keeping Assist, and Traffic Sign Recognition.

Given its coupe-like profile you might think that rear headroom has been compromised. Don't worry; it hasn't, and the average passenger is likely to find a fist of air between the top of their head and the roof-lining. Legroom is also surprisingly good but then the Civic is one of the most spacious hatchbacks in its class — chillaxing is definitely on the menu in the comfy seats. A five-seater this five-door family hatch undeniably is and supporting the 'family' bit are Isofix child seat fittings on the rear outer seats.

If you're the thoughtful kind of host who gets in Glenfiddich instead of Johnnie Walker for your guests, you might like to spend another Ł600 on the Tech Pack — your back row passengers will then enjoy heated seats and you'll gain too with wireless phone charging, LED headlights with washers, and LED foglights A good deal that's definitely better than no deal.

To earn 'family' status a large boot is essential — and that's exactly what the Civic gives you. With the rear seats occupied, the boot can spirit away a very practical 478 litres (and as much as 550 should you ever need to load to the roof).

Even more useful, this can be extended to a maximum 1,267 litres by dropping the 60:40-split seatbacks — the resulting loadbay is seamlessly floored and, combined with the low loading height and large tailgate, makes loading and unloading straightforward.

A unique, and very likeable, feature is the mini rollerblind luggage cover that runs side-to-side instead of the usual north-to-south. Removed, it's barely any bigger than a compact brolly so easy to stow when not needed.

Extra versatility is provided by an easy fold-up boot floor which, when folded in half, can be set in an upright position to effectively partition the boot (as well as the cargo bay) widthways, with the uncovered deep and wide lined well adding extra height. Alternately the folding boot sections can be set as a sturdy inverted 'V' above the well for protecting delicate items.

An engaging family-friendly all-rounder with a sporting air, the Civic five-door hatchback deserves to sit alongside the top contenders on your shortlist. Its comfortable and well kitted out interior is supported by a large boot and the well-sorted handling makes it fun to drive. ~ MotorBar