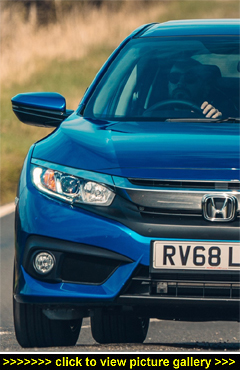 “They say the saloon is dead.
They’re wrong. Who says so?
Well, Audi and Mercedes for a start —
and now Honda has launched a four-
door saloon version of its excellent
new Civic...”

MAYBE NOT QUITE AS SPORTY as the Japanese carmaker's swish and sleek 150mph five-door Civic Type R, but in its new four-door Whistle and Flute with sharply creased panels and distinctive front wings and rear haunches, all sportily finished off by a sloping roofline and steeply raked tail treatment, the Civic saloon is strong on kerb appeal.

Swing open the driver's door and drop into the shapely seat and you find yourself in a similar environment to the four-door's five-door sister ship. This is a very good thing as the fluent ergonomics and logical fascia are both good on the eye and easy to navigate.

What's even better is the low-set seating position that immediately puts you in a sporty frame of mind. You don't sit too low — just enough to feel an integral part of the machine; an impression underscored by a gear lever that falls perfectly to hand and fine forward visibility.

The seats, upholstered in smart feel-good black fabric, are well shaped with decent bolstering that's comfortably supportive plus there's a fist of headroom above. The cockpit is light and airy and despite the sporty semi-low-slung seating the driver enjoys A1 visibility in all directions; slim A-pillars help and the bonnet is easily seen, making the four-door easy to place. The driver also benefits from a height-adjustable chair with powered lumbar support.

Fit and finish is up to Honda's usual high standards with smart not showy trim and finishings and neat detailing that helps make the Civic a pleasing place to be whether you're just nipping round the corner for a takeaway, escaping for a quick weekend break, or tripping the daily commute.

The multifunction steering wheel is a three-spoker with a good-to-grip leather rim. Behind it, the Civic's crystal clear digital instrument panel is refreshingly minimalist and everything important — such as the digital speed readout — can be taken in with the quickest of glances. Exactly how it should be.

Not only is there a lot of room in the wide interior but in-cabin storage is excellent and well thought-out, starting with a super-duper multi-configurable central storage unit between the front seats capped by a long shareable armrest; big bottle-holding front door bins offer plenty of space for not just refreshments but oddments too, the glovebox is helpfully large and there's a capacious 'cave' at the base of the centre stack above a lower storage area accessible from both sides.

Comms are well specced: the ever-present Apple CarPlay and Android Auto are on hand as part of Honda's Connect infotainment system; Garmin navigation provides idiot-proof full postcode destination input, and great 3D mapping is made better by clear street names and foolproof junction views — always much appreciated in fast moving motorway traffic. All of it is accessed and viewed through a sharp-res seven-inch touchscreen. Naturally there's Internet browsing and an Aha app, as well as Bluetooth and eight speakers for the DAB radio. USB and HDMI jacks can also be taken for granted.

Neither do you go short of essential kit with a very efficient dual-zone climate control system (with settings that can, if you like, be displayed on the touchscreen at the press of a button), rear parking camera with front and rear parking sensors, powerfolding heated door mirrors, ambient cabin lighting, electric parking brake with auto hold, one-shot power windows (all four), rain sensitive wipers, auto lights, alloy pedals, and a set of 17-inch alloy wheels.

An athletically sloping roofline usually comes at the cost of rear passenger headroom — but not in the Civic saloon, where you'll find more than enough. And it's not just above your head that there's room in the rear cabin; with an overall length of 4.6-metres there's acres of it for up to three pairs of legs arranged side by side along with generous footroom. And for the times there's just two sharing, the drop-down padded central armrest features built-in cupholders.

Just as important as ample wriggle room are the seats themselves — backseat passengers will find them as comfortable as the pair up front. Throw in plenty of light entering from generous glasshouse glazing and the rear cabin is a pleasantly calm and quiet sanctum when covering long distances.

Driving around urban landscapes the Civic saloon's damping (somewhat more yielding than the five-door hatchback) serves up a smooth and fluent ride; and while it's firm enough to also deliver clean and composed handling, there's no fidgeting even when rolling over poor grade blacktop — abysmal lumps and bumps are agreeably cushioned. No surprise then that the ride betters that of some of its classier-badged competitors — loping along motorways, Honda's latest saloon is a restful mile-eater.

The good news is that, despite the more cushioned ride, the saloon's handling set-up is well-sorted (it's underpinned by a tweaked version of the five-door's chassis) and this four-door Civic sits flatter when fired through the twisty bits. Body roll is well managed and the steering is game for some press-on driving; it's keen to turn in and the nose holds its line well. There's a satisfying responsiveness underscoring the four-door's handing composure and it feels more engaging than many of its rivals. Adding to the fun is the pleasingly slick and precise change action of the six-speed manual 'box.

While 118bhp might not sound a lot, it's not a problem because the power behind the throne is the 1.6i DTEC's torque — 221lb ft @ 2,000rpm. On the move the new four-cylinder unit feels smooth and peppy, dishing out more muscular performance than its 118bhp might suggest: the benchmark 62mph marker is passed in ten seconds dead and it will run on to a 125mph maximum.

Cruising motorways, engine noise is a distant background hum with fifth and sixth gears favouring economy — officially the combined cycle figure is an amazing 83.1mpg with a mere 91g/km of CO2 emissions. A week's hard driving saw us record an overall and very impressive real-world average of 59.2mpg while another of our reviewers managed a high 71mpg! Frugal, yes — and with a capital 'F'.

For the record, diesel is not the only choice — the four-door saloon's under-bonnet alternative is a 124bhp 1.0-litre petrol drinker although its official combined cycle economy of 58.9mpg can't match the diesel's 83.1mpg; and the turbodiesel's emissions of 91g/km are still better than the petrol unit's 110g/km.

519 litres is a big boot in anyone's book; and superior to even some bigger saloons from the class above. The only limit on what you can load is, as with all saloon cars, the size of the bootlid opening. Helpfully the Civic's backflips over the rear screen to make access as easy as possible.

If load space versatility is your number one priority then the five-door hatchback version will probably serve you better. Not that the four-door can't be accommodating — the 60:40-split rear seatbacks fold down at the pull of levers in the boot. They sit flat which boosts practicality and significantly extends the available load space.

In four-door guise the Civic is a fully-fledged saloon with it's own distinct character. And it's more than just a sporty presence — it's also an impressively economical, very accommodating and comfortable family car with plenty of room for luggage that's particularly satisfying to live with. ~ MotorBar