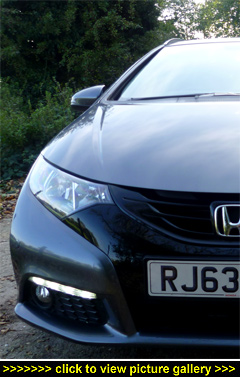 “Made in Swindon, the latest Civic
Tourer is another slice of pure Honda
that will appeal to both diesel
and petrol fans; the 118bhp 1.6-litre
turbodiesel comes with an alluring
name — Earth Dreams Technology —
while the 1.8 petrol makes do with
some extra brake horse power to
appeal to more racy drivers...”

IN CASE YOU'RE TEMPTED to switch fuel allegiance, the 1.6 i-DTEC diesel sweetens the deal with up to 74.3mpg (officially) in the combined cycle while emitting 99g/km of CO2. Against that the petrol-powered 1.8 i-VTEC officially averages 44.1mpg with emissions of 149g/km.

This past week we've been behind the wheel of the six-speed manual 1.8 i-VTEC petrol version which, unlike the diesel, does also offer the option of an auto if you're a less hands-on driver. In penultimate SR spec the 1.8 comes in at Ł24,355 — roughly mid-way cost-wise in a line-up that's priced between Ł20,265 and Ł27,460.

While Honda's load-maximising 'Magic' seats appear in all new Civics, both Hatchback and Tourer, the new Adaptive Damper System — offering Dynamic, Normal and Comfort modes — is standard-fit only on Tourer models and then only on the SR and range-topping EX. It is also a Ł500 option on the SE Plus although is not available on the entry-level S.

Externally the Civic Tourer has real presence — its long, streamlined, hunkered-down profile is reminiscent of one of Japan's famous 'bullet' trains and speaks subtly of technology happily married to utility; fronting it is a thrusting nose with a clean, steeply raked bonnet that wouldn't be amiss on a sportscar. Distinctively sculpted rear haunches flow into a practical yet shapely tail.

So, who's most likely to be driving this audacious new breed of Civic Tourer? Given its reputation and practical nature, plus luggage and load space that can match and even beat that of larger estates in the size class above the Civic's 'compact' slot, downsizers with a taste for quality will number strongly among the families also keen to harness its all-singing and all-dancing versatility.

At almost nine inches longer than the equally-new five-door Civic Hatchback, with which the Tourer shares its wheelbase, the estate has fully exploited the extra inches with an enormous and class-leading 624-litre boot. That's with the 60:40-split rear seats up; fold them flat and you'll understand why its seat system is called 'Magic' as before your eyes the boot magically transforms into a 1,668-litre cargo hold.

The resulting lengthy floor is all of a piece with no seams for cargo to snag on. Better still, and not always the case today, the Tourer's cargo bay has a totally flat floor. It's also accessed via a large opening; and the tailgate rises high so you can stand right up close when handling heavier cargo or cases.

Look closer and you'll find a large and deep underfloor storage compartment (with a self-supporting lid) beneath the boot floor. A particularly thoughtful touch for a nation of dog-lovers is the provision of an easy-clean carpet. Adding to the Tourer's uncomplicated usability, the smooth-working roller blind has a clean locking action and a light finger-tap on its end flap releases it at once.

The main cabin certainly doesn't disappoint. It's cosseting but at the same time roomy with a fist of headroom; well-cushioned and well-shaped front seats are separated by a padded centre armrest. The 'curvy' fascia creates a distinct driver's space delineated by the slightly raised and conveniently close-to-hand stubby gearlever.

The instruments are arranged in two easily viewed sections; the main three analogue dials, each in its own nacelle, cover engine coolant temperature, revs, and fuel, with pride of place in the centre given to a rev-counter red-lined at 6,700rpm.

Immediately above it runs a wide display strip showing a range of driver information (all quickly scrolled through via a fingertip press on the remote button) alongside a large digital speed readout.

The meaty all-black, three-spoke multifunction (cruise, voice, phone, etc) wheel is leather-wrapped, good to grip and reflection-free. In line with the main dials and set in the middle of the fascia is a touchscreen for the infotainment system; navigation is foolproof with speedy full postcode destination entry, and the sharp mapping is backed-up by unambiguous countdown graphics and in-good-time warnings of upcoming direction changes.

The climate control is very efficient, as too is the seat heating (two-stage), the handbrake is the traditional pull-up kind that many drivers still prefer, and there are plenty of storage spaces for personal items along with good-sized, bottle-holding door bins. Adding to the Tourer's ease of use is a rear-view camera supported by front and rear parking sensors, height-adjustable seatbelts and a decent left foot rest for longer trips 'in the cruise'.

Entry and exit to and from the rear cabin is unhindered and while visually the Tourer's passenger space is the same as the hatchback's, it does provide a tad more headroom for those travelling in the back seats. In addition there's good foot, knee and leg room and a nicely padded centre armrest to keep two apart in a very civilised manner.

A third in the middle is doable but that denies the outer two passengers somewhere to park their coffee cups as the cupholders are built into the armrest. Despite the privacy glass fitted from the B-pillars back, the rear passenger compartment is pleasantly airy thanks to a pair of third rear side windows.

Even with the back seats occupied there's loads of extra storage under the rear seats across the full width of the body. And yet another storage surprise — lift the Tourer's rear seat and the base folds up against the seatback where it can easily be locked in place, making available a massive self-contained load compartment that runs right across the rear cabin and from floor-to-ceiling.

Dynamically the new Tourer is 'good to go'. And go quickly. The electronic power steering has been sharpened and offers improved weighting, and the stiffer bodyshell delivers crisper handling. Building on that, the new Adaptive Damper System automatically adjusts the rear suspension to improve stability and ride comfort under varying load and driving conditions — the driver can select Dynamic, Normal or Comfort, the better to match his or her driving mood, the road conditions or the load.

As you'd want in an estate carrying sometimes heavy loads, the brakes are strong with hefty vented front discs that help scrub of speed in a reassuringly controlled manner.

Overall the Tourer is easy and pleasant to drive — this is a car you can jump into day or night, sun or storm, and just drive, confident in its ability to get you there come what may.

The petrol-drinking 1.8-litre is a high-revver and likes to be worked — and it's not afraid of hard work! Top speed is close to double the UK's legal limit with the more useful off-the-line to 62mph sorted in 9.6 seconds.

A quick-changing six-speed manual 'box lets you make the most of its 140bhp. In real-world driving we recorded 39.8mpg — comfortably close enough to the official 44.1mpg to indicate that more laid-back drivers should regularly find themselves in mid-40s territory.

Boxes can also be ticked for Driver Assistance Safety Packs that include Adaptive Cruise along with various pro-active driver aids that monitor lane changes, watch your blind spots, and recognise and display traffic signs as well as warn of stationary traffic up ahead and brake for you if you ignore the warnings and a collision is imminent.

With its huge, multi-configurable load space and multi-mode adaptive damping that benefits both ride and handling, the sporting-looking Civic Tourer is a particularly appealing package and all the better for that 'H' on its grille. — MotorBar