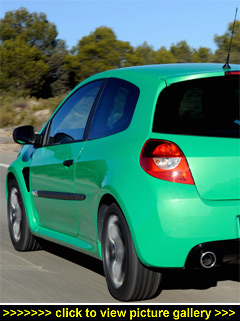 “Despite our forced fixation with low
taxation in the modern motoring
‘green’ climate, ‘hot’ models still have
their appeal for motoring and motor-
sport enthusiasts. Cars like the Clio
Renaultsport 200 Cup — so ‘hot’ it
could be called the Vindaloo...”

HOT VERSIONS OF SMALL HATCHBACKS still have a healthy following and the introduction of the Clio Renaultsport 200, the MINI Cooper S, the new VW Polo GTI and the SEAT Ibiza Cupra will continue to fuel demand. Thrill-seekers can also choose from the likes of the new Citroen DS3, Skoda Fabia vRS and the slightly larger Abarth Punto Evo.

I have just had a spell driving the Clio Renaultsport 200 Cup which, unlike its main rivals' 1.4 or 1.6-litre turbocharged direct injection petrol engine offerings, has a 2.0-litre, normally aspirated, multipoint fuel injection petrol unit. This high-revving engine pushes out 200bhp at 7,100rpm and 158lb ft of torque from 5,400rpm — but its CO2 is a high tax-incurring 195g/km.

This means you pay Ł425 for the first year's road tax although that does go down to Ł235 for the second year onwards. In the unlikely event the car doubles as business transport, then 28% Benefit-in-Kind tax is a real penalty to ownership. By comparison, the hot Clio's main competitors attract around Ł110 to Ł125 in VED and 16 to 18% in BIK tax.

Whilst the Ibiza Cupra is the cheapest to buy and the Polo GTI the most expensive, the Clio and Cooper S are pretty evenly matched at around Ł17,000; and the performance of all of them is pretty close — 140 to 141mph and 0-62mph in around 7 to 7.9 seconds.

The Clio Renaultsport 200 comes in two road-going forms: the Ł16,710 Cup version, which has a slightly more hardcore suspension/running gear set-up; and, offering the same power output, the 200 version that has a higher level of specification and costs Ł17,710. Renault also offers a non-road legal Clio Cup race car version at Ł30,000 plus VAT.

Renault will shortly introduce the Clio Gordini 200, priced at Ł19,650, with added specification over the 200 and 200 Cup models. It has the same engine but only 500 of them will come to the UK. Just as Abarth is a motorsport name from the past which has injected appeal into the current Fiat brand, then Renault, with the Gordini tuning heritage, plan to do the same.

The Clio Renaultsport models have three doors and use a modified version of the standard Clio three/five-door supermini sized hatchbacks. The changes include a wheelbase lengthened by 10mm and chassis lowered by 15mm with the tracks widened by 48mm at the front and 50mm at the rear. The Cup version has a ride height lowered by a further 7mm, springs stiffened by 27% at the front and 30% to the rear, dampers stiffened by 45% and the steering ratio is quicker by 7.5%.

There are also front and rear anti-roll bars and a 10% increase in rigidity and more flexible bump-stops to accommodate the much firmer — dare I say it; harsh — ride.

There is no doubt that the Clio, even in its standard form, is one of the most accurate and agile superminis in its class: it excels in its handling qualities — and the Renaultsport versions are even better. Renault's PerfoHub front double axis strut suspension system offers greater stability under heavy braking and with better precision for the steering during fast cornering — and it more or less eliminates torque-steer.

However, the ride is very firm indeed; rock hard in fact and it can become very tiresome on long journeys and the road noise intrusion is significant. This really is a hot hatch for specific reasons: unashamedly more suited to hardcore motorsport than day-to-day driving unless you have enthusiastic and understanding passengers.

The styling changes are dramatic over the standard Clio III production cars. The Renaultsport body is unique with wide front wings to accommodate the wide tracks and 17-inch anthracite wheels, and there is enough space between the five spokes to see the red Brembo four-pot brake callipers and ventilated front discs — all part of the sporty image.

Behind the front wheel arches, the front wings feature large extractor vents which do two jobs: maximise the cooling air-flow through the engine bay and around the front brakes; and direct the heated air smoothly along the flanks of the 200 to reduce turbulence, enhance performance and improve high-speed stability.

Also included in the Renaultsport aero package are muscular front and rear bumpers, an F1-style front blade under the bumper and a rear air diffuser flanked by twin exhaust outlets. And a mighty and meaty hot-hatch it looks as well.

Inside there are six airbags, so the Clio's five-star safety rating is intact, and with height adjustable front seats and rake-adjustable steering column it was relatively easy to set a good driving position. My Cup model had the Ł950 optional Recaro front seats which firmly retain you in the car during very high speed cornering. My test car also had the Ł565 optional extra air conditioning that comes as standard on the non-Cup model.

While the Cup version has manually operated door mirrors instead of the electrically controlled type, it does have electric front side windows, remote central locking, a one-piece folding rear seat, puncture repair kit (instead of a space-saver wheel), multi-function computer, tinted windows, aluminium pedals, leather steering wheel and gear knob and an acceptable quality, albeit fiddly to use, sound system.

Other sporty detailing includes a yellow-faced rev-counter with a gearchange indicator light and audible warning as the driver approaches the 7,500rpm red-line. Oh yes, most importantly for track day users, the ESP Electronic Stability Programme can be turned off although for road use I would strongly suggest it stays on.

The Clio Renaultsport 200 models use a high-revving, 2.0-litre, normally aspirated, multipoint fuel injection four-cylinder Euro 4 petrol engine with variable valve timing and a new ECU which results in 20% more torque than the old 197bhp unit. The variable valve opening times are optimised for out-and-out high performance but, bearing in mind our congested roads, the power delivery below 5,000rpm is also designed to be tractable and responsive.

Where this unit does miss out is in not having the instant 'boost' of power mid-range from a turbocharger coupled with direct injection — and offered by most new Euro 5 high-performance, free-revving 1.4 and 1.6-litre engines in this hot hatch sector.

The 200 Cup's engine is fast for sure and it can be docile as well, but it lacks that surge of power in higher gears we are now used to. It will do the job, but it requires several changes down the close-ratio gearbox to get the engine to spin-up in performance. Luckily, the new six-speed gearbox is a gem; smooth and precise and it can accommodate block-changes.

Top speed is 141mph and 0-62mph takes 6.9 seconds — little different from competitor 1.4/1.6-litre turbocharged petrol units although this is a 2.0-litre. Fuel economy is officially 34.4mpg in the Combined Cycle and driven with care I did achieve 32.3mpg in real-life. Driven harder, expect about 10mpg less. The CO2 emissions are much higher than other new hot-hatches in this sector so, as already mentioned, the 195g/km CO2 level will be costly in tax.

That noted, the Clio Renaultsport 200 Cup excels in its precise handling, copious amounts of cornering grip, agility and really responsive and accurate steering. I liked the styling as well. The ride comfort is poor so there's a compromise between potential track use and road travel. And the lack of a turbocharger and direct injection does mean the engine needs to be worked hard for out-and-thrust driving on-road. More Balti than Vindaloo, perhaps? — David Miles