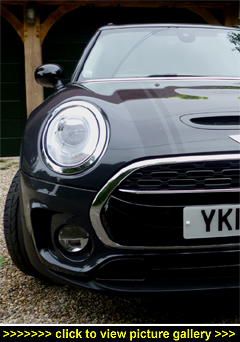 “The Brexit way things are going,
it’s good that you can still buy great
cars that are made in the UK.
The new Oxford-built Clubman ALL4
from MINI will make you proud to
be Buying British...”

ALL4, AS ITS NAME IMPLIES, is the all-wheel drive version of MINI's six-door mini-estate and parking one on your drive will cost you from Ł24K. Under the bonnet you can have either a 189bhp 2.0-litre turboed petrol engine (Cooper S) or a 187bhp 2.0 turbodiesel (Cooper SD) — the most powerful diesel engine ever installed in a MINI.

And yes, we did say six and not five doors — and that's actually the new Clubman's signature feature: four conventional side doors and a pair of side-hinged doors accessing its practical boot-cum-loadbay.

And it's not just any old all-wheel drive under the skin but an 'intelligent' one. If you like changing gears with a stick then the petrol unit offers a six-speed manual g'box or, for those who don't, an auto. The more torquey SD turbodiesel only comes with a Steptronic automatic transmission.

When we said 'intelligent' we meant 'on-demand' — most of the time the ALL4 sends power to the front wheels, feeding drive to the rear wheels whenever grip starts to lighten-up at the nose.

And rather than just reacting once it's gone, the ALL4 system anticipates any loss of traction and diverts more to the back wheels to rebalance the car and neutralise any tendency to run wide under power. In addition there's also torque vectoring — using an electronic differential lock, this also boosts traction (either by braking or sending more power to any individual wheel) when pulling away from slippery junctions or powering out of bends.

And with 187bhp and 295lb ft of torque, a top speed of 138mph and off-the-blocks acceleration to 62mph in 7.2 seconds, you'll definitely be exiting bends with gusto in the ALL4. But with an official Combined figure of 58.9mpg, you won't be stopping too often to fill up. Everybody knows that 'official' figures rarely achieve their lab-obtained results in real-world driving, so Cooper SD owners won't be holding their breath to see the high-fifties. That said, a week's spirited driving (it's hard not too indulge that extra ALL4 roadholding) threw up a pretty good 48.9mpg.

With accessible get-up-and-go, all-wheel drive, a keen autobox, and a heavy right foot, near 50mpg is pretty much something to cheer about. More sedate drivers — who've bought their Clubman for equally valid reasons of practicality, versatility and all-weather driveability — will likely better our average figure. Who knows, they may indeed see 58.9mpg. If not, then they'll have as much fun as we did. So, a win-win situation.

But if fun is your 'fave' then there's much to ensure you get it. While you could choose the petrol-fuelled Cooper S, the generally quiet and smooth-running turbodiesel Cooper SD has plenty of something that both 4x4 systems and autoboxes thrive on — torque. And with a hefty 295lb ft of it on call from 1,750rpm, the clean-revving four-pot SD and eight-speed Steptronic transmission make a more fluent couple than many who've appeared on Strictly.

Injecting some 'sport' into the Cooper SD's driving is made easy by the 'collar' around the base of the selector lever. Turn it to the right and you'll move from Normal into the Green mode, which is all about 'eco'. The ALL4's stop-start system, by the way, is a good 'un — not only is it hardly noticeable in operation but, unlike some, it restarts promptly when you're ready to 'go' again.

Twist the drive setting collar clockwise from Normal and you'll find yourself in Sport mode — the steering weights-up and reacts quicker, the upshifts are palpably faster, and the response to your right foot is noticeably snappier as the ALL4 readies itself to rumba.

And rumba it can; but its best moves are in the Sport driving mode where the poke-on-demand will bring a smile to your face. Given its all-wheel drive character, the surprise is just how eagerly it wants to party — body roll is well managed (just enough 'lean' to let you know when the limit's closing in) and the suspension keeps it all very civilised even when you pitch it into a corner and then power out with some real zing. At high cruising speeds it's very confidently 'planted'.

The ride/handling compromise seems to suit both parties and the ALL4 feels sure-footedly agile yet settled on its 225/40 18-inch Bridgestone rubber, dealing well with scarred blacktop and even gravel tracks while still giving you feedback as to the contours unfolding beneath you. Speed bumps are best not disrespected.

With its wide, hunkered-down stance, 'fat' seven-spoked, black 18-inch alloy wheels, black wheelarch protectors, and black glasshouse treatment — and not forgetting those unique twin doors at the tail — the Clubman looks estate-like in a captivatingly different way to every other estate car you might come across. Which is part of MINI's clever marketing: there's not really anything else that looks even vaguely like the Clubman, so if you like it there's no alternative but to Buy MINI!

Pull on one of the easy-to-use big chrome door handles and inside it's a similar story: there's nothing quite like a MINI cabin with its trademark large central 'dial' and funky-yet-functional toggle switches. And with these latest-generation models a premium ambiance can be taken for granted: quality feel-and-look leather upholstery, a herringbone-pattern metallic fascia insert, plus plenty of well-fettled chrome trim highlights, especially to the switchgear.

Top marks too for the head-up display — it shows graphic navigation prompts and your road speed alongside posted speed limit signs and its clear-cut information can be safely absorbed without taking your eyes off the road.

Sited in the centre of the dash, the main 'dial' is not so much a dial as a fully-fledged infotainment and SatNav hub with 3D mapping. An analogue speedo flanked by a slim arc for the rev-counter and another for the fuel sits dead-ahead of the driver; the onboard computer screen within the speedo keeps you informed about all things trip as well as the currently engaged gear, external temperature, etc. Scrolling through the menu is easily done via a button on the indicator stalk, while the multifunction steering wheel controls cover just about everything you'll need access to whilst driving.

The leather-wrapped wheel is exactly what you'd expect to find in a sporty MINI: a three-spoker with a thick, grippy rim, comfy thumb-rest pads, and shift-paddles on the horizontal bars.

Setting a perfect driving position takes no time at all even though the sporty, well-bolstered (in suede) and supportive black leather seats are manually operated; to make up for that they come with three-stage heating, adjustable height and lumber, and extending under-knee cushions.

The cabin itself is light and airy (with a fist of air between your head and the roof-lining), thanks in part to the twin glass roof panels; the front one incorporates a one-shot tilt action that lets in fresh air but to keep the temperature just so you've got dual-zone climate control and every-which-way air vents. The three large illuminated climate knobs are easy to use on the move, and the system does very cold when it's very hot, as it was during our week with the car.

Those travelling in the well-shaped back seats are also pampered, with easy entry and exit and, courtesy of good-sized windows and plenty of space between the front seats, clear views out. A fist of headroom (even for somebody occupying the middle bench), decent foot- and knee-room and relaxing backrest angles along with rear cabin air vents all add to the comfort.

Plus there are deep magazine pockets, bottle-holding door pockets and a wide drop-down central armrest with pop-up cupholders as well as damped 'grabs' for those who like to indulge in a spot of strap-hanging. Yet another good point: the black mesh sunblind for the rear glass roof helpfully opens forwards rather than rearwards, so you can keep the sun out of your eyes while still taking in some rays.

Who'd ever have thought that there could be pleasure in just opening a boot? Well, opening the Clubman's is enjoyable every time you do it! Plip the smart key and the right-hand tail door springs fully open; plip again and the nearside one does the same. It's almost as good as watching the hood on an Audi Cabriolet closing on the fly at 25mph.

Access to the wide, deep, tall and regular-sided boot couldn't be easier; and with a load sill just above knee height, packing and unpacking its 360 litres is a lightweight chore.

The rear seatbacks are split 40:20:40 so offer plenty of versatility when it comes to 'carry-through' items. Fold down all three and the boot becomes a practical 1,250-litre loadbay.

Usefully, the rear backrests can be set to totally upright to maximise space when carrying cases of wine (as one does) or other boxy items. Also useful are the open bins with stretchy net fronts recessed into the boot sides; equally handy but not at all expected are the door bins in both boot doors.

Lift the end section of the boot floor and you'll discover more storage in the shape of a deep, lined compartment. You can also divide up the boot/cargo bay by positioning the partly-folded boot floor at 45-degrees and in the process gain an extra six inches of boot height.

Overall it's a well-thought-out, multi-configurable cargo space, and yes, of course there are bag holders, tie-down eyelets, and boot lights. The rear privacy glass (to the rear side windows and boot doors) is also a good thing when you're using the Clubman for a spot of load-lugging.

There are also a number of likeable and light-hearted touches such as the very magnified winged MINI badge that's projected onto the ground from below the door mirrors when you unlock at night and which reminds you of the searchlight projection they use in Gotham City to summon Batman; and then there's the pulsing red light atop the shark-fin antenna that let's you know your Clubman is safely locked up. Also deserving of a mention are the rear wash/wipes so essential for our wet British climate — there's one on each tail door.

Backing Britain doesn't have to be a reason for buying a MINI because, in the case of the entertaining-to-drive Clubman mini-estate, the combination of a powerful and refined turbodiesel, paddle-shifting autobox and four-wheel drive puts the 'fun' firmly into function. ~ MotorBar