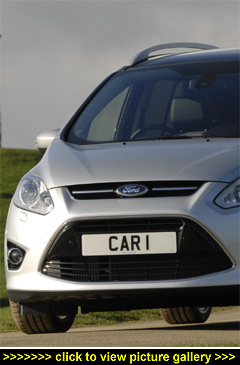 THE NEW C-MAX MODELS are a product of intense customer research. In a diminishing new car market with customers downsizing nobody can afford not to hit the target and deliver what real, financially-stretched and heavily-taxed customers need.

The new C-Max with five seats and five doors is a medium-sized people carrier and replaces the existing best-selling Ford MPV. The Grand C-Max uses the same core platform but extended by 130mm to offer seven seats.

However, unlike the C-Max with its hinged rear passenger doors, the Grand has rear side sliding doors to maximise ease of entry to the middle and rear rows of seats. The platform on which both new models are constructed will, incidentally, also be used for the forthcoming next generation Ford Focus.

Ford expects the seven-seater Grand to outsell the five-seater, the main reason being that with the usual five seats in use and the rear ones folded away, there is more load space to carry work or play 'stuff' in the longer Grand.

The new models will sell against the Citroen Picasso and Grand Picasso, Renault Scenic and Grand Scenic, the new Vauxhall Meriva and, shortly, the new seven-seat Vauxhall Zafira.

More rivals are the Toyota Verso, various crossovers including the Peugeot 3008 and a rash of new larger MPVs such as the SEAT Alhambra, VW Sharan and Peugeot 5008.

And some in-house alternatives — the larger and sporty Ford S-Max seven-seater MPV and the recently updated seven-seater Galaxy people carrier.

The all-new C-Max five-seater and seven-seat Grand C-Max will be sold in Zetec or Titanium trim levels starting at Ł16,745 and Ł18,745 respectively. Zetec will be the most popular level for both models. The most popular model out of the two ranges will be the Grand C-Max Zetec with the 113bhp 1.6-litre TDCi diesel unit priced at Ł19,745, which is Ł750 less than the outgoing equivalent five-seat C-Max.

Engine options, depending on which version is chosen, include 103 and 123bhp 1.6-litre petrol and 113bhp 1.6 and 138bhp 2.0-litre TDCi diesels. Coming soon will be the all-new Welsh-made 1.6-litre 148bhp EcoBoost direct injection petrol engine priced from Ł19,745 in the top spec C-Max Titanium version only.

The Grand C-Max with this engine and in Titanium specification will cost Ł20,995. For automatic transmission customers, Ford's new twin-clutch PowerShift gearbox will become available with the 2.0-litre TDCi 138bhp turbodiesel engine.

On the road during my brief test drives on UK roads, both versions impressed with their ride comfort, precise handling, sharp steering, the lack of road noise intrusion and their general ability to cope with our poor roads.

The driving enjoyment and handling performance is so good in what are quite large people carriers that I'm really looking forward to driving — early next year — the new Focus five-door hatchbacks based on the same floorpan and suspension layout.

The command seating positions in both C-Max versions are superb, giving a good view out of the vehicle and providing that added feel-good security of being in a safe environment. The seating configurations for both versions are first class and it will really be down to meeting customer's exact transportation needs as to whether they go for C-Max with seating for five and load space ranging from 563 to 1,633 litres or Grand C-Max with seats for seven and still load space ranging from 471 to 1,742 litres.

Until the 1.6-litre EcoBoost petrol engine comes along — which could suit low-mileage retail customers best — the overall front-runner for me, whether I am a retail or business user, is the 1.6-litre 113bhp TDCi turbodiesel.

Although this unit is a bit 'tardy' in response and flexibility in first gear and low down in second gear until the turbocharger kicks in to deliver 199lb ft of torque (from 1,750rpm), once underway the delivery of power is impressive and it feels strong.

Around country roads there is the requirement to change down more to keep the turbo 'on the boil'. You cannot just rely on the torque to do that work for you, but we are going down the path of engine downsizing so it is a driving characteristic motorists will have to get used to.

The plus side, of course, is good fuel economy — 57.7mpg — and a low CO2 figure of 129g/km which means Ł0 in road tax for the first year and only Ł90 a year after that. These figures are for the best-selling Grand C-Max.

The smaller C-Max does 61.4mpg with 119g/km and has zero cost road tax in the first year and then just Ł30 per annum thereafter. For company car drivers the Benefit-in-Kind tax is 13 per cent for the five-seater and 18 per cent for the Grand seven seat version.

My time with the two new C-Max versions was relatively short but the very favourable impressions will be long. Both are great packages, ideal for families, for business users and for empty-nesters — all customers who just want good quality, well equipped, roomy and versatile family transport and realistic prices.

My only complaint was the tardy acceleration and response at low engine speeds. That noted, reasons to buy a C-Max are many and include easy-to-use seating, huge load space, very comfortable, sharp handling, keen pricing and low running costs.

If pushed to say which is best, unless seven seats are a priority, I would say the C-Max five-seater looks sportier and while I'm not a fan of side sliding doors, which the Grand C-Max has, they do have an advantage in some circumstance; tightly packed car parks being one. But it's your life, so you decide! — David Miles