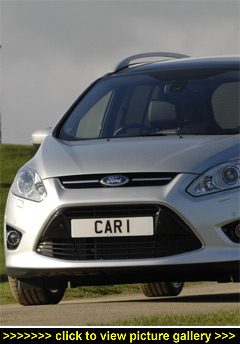 BY FORD'S OWN ADMISSION, it was way too late to the mid-size MPV market. Its first attempt, the 2002 C-MAX, came to the party about twenty-four hours after everyone else had eaten all the cocktail sausages. Not only was the C-MAX well behind the competition in terms of timing, it was also not nearly as cleverly laid out.

For instance, it was a five-seater only; its rear seats didn't come out; and if you wanted to slide the rear seats back, it became a strict four-seater. The C-MAX still sold 730,000 units and, for a while, was even the UK's best-selling MPV.

Ford knows it needs to do better, and with the new generation C-MAX it's trying to make amends. Which is why they're offering the new C-MAX in two forms: a regular five-seater and the Grand C-MAX which comes with a longer, taller body, sliding rear doors and seven seats — the preferred format for UK buyers. The Grand's extra 130mm (5 inches) in the wheelbase over the regular five-seater C-MAX, plus its taller roof line, frees up space for an extra two seats in the back.

Getting in is made much easier by twin rear sliding doors — a first for Ford. They're very reminiscent of the Mazda5's — a car with which the Ford shares significant DNA. In fact, the Grand C-MAX has purloined a lot of what makes the Mazda5 so appealing, including its seating layout.

The seating is one of the best aspects of the Grand. Taken directly from Mazda is the 'walk-through' system, where the middle rear seat (not the most comfortable in the cabin) folds into the base of the seat next to it. That leaves an aisle free to access the rearmost pair of seats without having to disturb passengers (or child seats) in the middle row.

Compared to the five-seater C-MAX, there's a lot more leg and head room in the Grand's centre row. However, in the very back things are rather tight for grown-ups although fine for a couple of smaller kids.

Folding the rear seats down is a very simple, one-touch job. The load floor created is completely flat, so you can fit a huge amount in — up to 1,742 litres with all five rear seats down. But with the rearmost seats in place, you can all but forget about luggage — just 115 litres is available.

To drive, the C-MAX gives us big clues about the new Focus (due in the next few months) because it's based on the same new platform. The news is good: the C-MAX is surprisingly nimble on the road.

Electric power steering normally feels less connected than hydraulic systems, but Ford's all-new electric steering has plenty of feel programmed in. This encourages you to explore the C-MAX's handling which, for the record, is well above the average for an MPV — not that you'll be likely to fine-tune your Colin McRae rally techniques with granny and the kids in the back!

Ride comfort is much more important in this market sector and, thanks to Ford's new 'control blade' rear suspension, the C-MAX's is impressive. Whether loaded or unloaded, it remains compliant and almost entirely free of the pitch and body roll from which many MPVs suffer.

As for engines, most MPV buyers these days go for diesel — and the C-MAX offers a choice of two. The 113bhp 1.6 TDCi is basically the same engine as the one you'll find powering the Peugeot 5008, Citroėn C4 Grand Picasso and Mazda5. It's perfectly acceptable and low on CO2 emissions — but not what you'd call lively.

Far better is the 138bhp 2.0 TDCi, which offers much more pep with no loss of refinement. And frankly, if you're loaded up with seven people, this is the engine you'll need. Ford offers its excellent Powershift automatic as an option.

Given that the Mazda5 and Ford Grand C-MAX are so closely related, which one should you go for? If you prefer pure function, and like a bit of performance from your diesel engine, go for the 2.0 TDCi Ford. If you think, as I do, that the C-MAX's design elevates function above form, the more elegant Mazda definitely has the edge. — Chris Rees