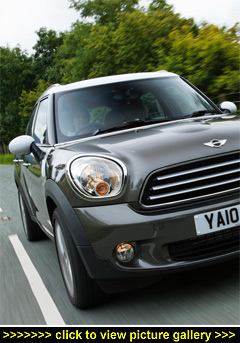 “The MINI Countryman is the first
four-door MINI, the largest ever
and the first with four-wheel drive,
although two-wheel drive versions
are likely to be the most popular.
In 2011 the Countryman will gain
further exposure when it becomes
the model MINI will use for their
return to World Rallying...”

THE COUNTRYMAN IS THE FOURTH MODEL type in the MINI range, joining the three-door Hatch, the Convertible and the Clubman estate. But that's not going to be the end of the expansion… two-door Coupe and Roadster versions of the Hatch are being launched in the next two years and MINI has just announced a three-door coupe version of the Countryman — to be called the Paceman — that will be with us in 2012.

There are also rumours that MINI will return to its roots in the not too distant future with a small city car. Enthusiasts will notice that I have not included the e-MINI. Yes, they do exist but these two-seater electric-powered Hatch versions are prototypes being used to test the technology for a small BMW passenger car.

Last year MINI sold 234,000 new cars worldwide. The USA is now the brand's largest market (with over 300,000 customers in the ten years since the re-launch of MINI in the States) followed by Germany and the UK. In this country last year 43,894 new MINIs were sold — a healthy 10% increase over 2009. With more models joining the line-up, sales will inevitably increase which, of course, is always good news. Around 15,000 Countryman versions will be sold in the UK this year.

Out of the 200+ new cars or derivatives I tried and tested last year, there were only a couple of models that gave me doubts. One that did was the MINI Countryman. Not only did it have a 'steroid-enhanced' body design but during my initial test drive session I found it didn't drive all that well. Furthermore it was expensive and its size, added weight, 'jacked-up' suspension and all-wheel drive system didn't give it the responsive go-kart handling the MINI is justly famous for.

Unlike all other MINIS to date, the Countryman isn't built in the UK at Plant Cowley — it's built by Magna Steyr in Austria because they are experts with BMW's all-wheel drive technology. That noted, there seems to be no difference in quality, fit or finishings, with no squeaks or rattles, so the marque's premium brand status appears to have been retained.

However, being a premium brand means premium prices. The Countryman prices now range from Ł16,340 to Ł22,495 for manual transmission models and Ł17,565 to Ł23,725 for autos. The seven-model line-up of specifications is One, One D, Cooper, Cooper D, Cooper D ALL4, Cooper S and Cooper S ALL4. Of course, MINI is all about lifestyle packs and options and there are the usual Salt, Pepper, Chilli, Media and Vision packs depending on which model is chosen, plus a whole host of other extra-cost goodies.

After a week of use the Countryman is still no masterpiece of styling in my eyes or indeed in the eyes of most people who asked about it. Certainly people found it interesting — but not likeable.

Yes, it does offer families a more versatile vehicle because of its four passenger doors and a rear tailgate that accesses a 350-litre boot (with the rear seats folded, there's a roomy 1,170 litres of cargo space). But for this kind of money — Ł22,495 — we're getting close to the purchase price of a BMW X1 xDrive crossover SUV which is roomier, even more 'brand desirable' and which rides and drives better as well.

The Countryman offers the choice of two or three rear seats — mine had the twin bucket seat layout. Three seats can be ordered as a no-extra-cost option although the middle one is narrow and in this configuration only three children can be accommodated in the back. Of course, the added body length and sliding seats mean extra legroom for rear seat passengers so in that respect the Countryman is the best MINI for family use.

Despite it bulbous exterior looks, with only a hint of MINI styling details remaining, the Countryman's interior remains classic MINI. The huge, centrally-mounted speedometer, the rev-counter mounted on the steering column and the fiddly window and heater controls positioned in the centre console are all retained.

The ride very much depends on what type of driving is being undertaken. The higher ride height is okay in urban traffic, where I suspect most fashion-conscious owners will use it the most often. But on the open road the elevated body leans through corners and the car generally feels unsettled with a compromised ride. The trademark 'skateboard' agility has gone.

In the countryside, the all-wheel drive does have an advantage for added grip during winter weather conditions but when the roads dry out I'm not convinced that four-wheel grip is of much more use. The ground clearance, although higher than that of an ordinary MINI, is not enough to give the Countryman any off-road capabilities except for crossing grassy fields or driving along gravel tracks.

Not so good: bloated styling, feels cumbersome at lower speeds, road tyre noise intrusion, other 4x4 compact crossovers are more practical and cheaper. Plus points include a great, hugely-responsive engine, drive it in a sporting manner and you get the usual MINI thrills, feels well made and it caters for MINI owners with a growing family.

Having only seen two other Countryman MINIs on my local Cotswold roads during the last week — a wealthy locality where I would have expected to see more — I rather suspect the Countryman is more about 'being seen' in the well-heeled urban jungle than the countryside where proper crossovers and SUVs remain both more practical and more desirable. — David Miles