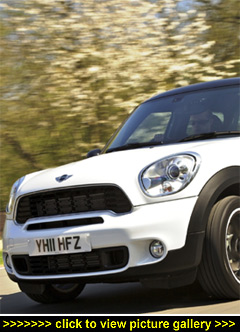 THE NEW COOPER SD VERSIONS (as they are badged) cost from Ł18,750 for the SD Hatch up to Ł23,190 for the Countryman SD ALL4. There's a price premium for the 141bhp diesel unit over the 181bhp Cooper S petrol-powered ranges of Ł695 for the ALL4 Countryman and Ł740 for the Hatch. However, equipment levels for the petrol Cooper S and diesel powered Cooper SD are identical.

The current 90bhp turbodiesel used for the MINI One D and 112bhp Cooper D stay in the line-up. Twenty-seven per cent of MINIs sold in the UK are diesels but with the new high-performance 2.0 unit added for models carrying the Cooper S badge, this will increase in the next two years to around 35 per cent.

Although diesel fuel is now considerably more expensive than petrol there is still a growing demand for 'oil-burners' of all makes — sales of new diesel cars grew by 7.9 per cent in the first quarter of 2011 and they now account for close to half (48.5%) of all new car sales.

MINI sales have grown on a regular basis in the UK and already this year MINI sales are up by another 9.8 per cent. The UK sales split between the four MINI body styles is: Hatch 53%; Clubman 7%; Convertible 16%. The latest addition, the Countryman, takes 24 per cent.

For the record, the Countryman is built in Austria but all other versions are produced in the UK, the second largest market in the world for MINI sales.

And there's still a lot of kudos linked to the MINI Cooper S name, which first graced the classic Mini back in '63 — in the 48 years since then it has consistently been feted as the ultimate performance Mini: a three-time Monte Carlo rally winner, it's also won countless other races and rallies around the globe.

Not only will the new SD models be the most performance-oriented diesel MINIs ever, but the Cooper SD version will feature the largest displacement engine ever to grace the engine compartment of a MINI model in the marque's 52-year history; and it's also the first time this two-litre BMW unit has been used in a transverse configuration.

The 2.0-litre high-pressure, common-rail, four-pot turbodiesel follows the design philosophy of the familiar BMW 1.6-litre diesel but produces 141bhp at 4,000rpm — that's almost 28 per cent more than the Cooper D and nearly 60 per cent higher than the One D.

The power is allied to substantial torque: 225lb ft from 1,750 to 2,700rpm. This too is the highest torque of any MINI engine, even those of the John Cooper Works family. This endows the Cooper SD models with vivid performance; for instance, the likely best-selling Hatch version has a top speed of 134mph and zips from zero to 62mph in 8.1 seconds.

But it's not all about 'grunt 'n' go' — in these heavily taxed times it also has to be about economy and emissions. The three-door Cooper SD Hatch will officially manage 65.7mpg in the Combined Cycle, and its 114g/km tailpipe emissions mean road tax is Ł0 in the first year and then just Ł30 per year thereafter. For the all-important high-mileage company car driver who still wants entertaining performance, the Benefit-in-Kind tax is a steal: just 13 per cent.

Driven hard at times and sometimes in heavy traffic over the winding country roads of Somerset, my test MINI Hatch Cooper SD returned a credible 50.3mpg.

With just about everybody, from premium brand customers to business user-choosers, downsizing where possible, the Hatch SD should remain the best-selling model with this new engine.

That said, it will probably have even greater appeal (and make more financial sense) to the growing band of MINI customers opting for the crossover five-door Countryman, particularly if the ALL4 all-wheel drive option is chosen.

For the busy high-mileage company car driver with weekend family duties, this model will have considerable appeal because of the performance as well as the Cooper SD image and luxury sporty specification.

Plus all that torque (225lb ft) coupled to the AWD system is a really good combination. Bearing in mind the last few bad winters and the appalling road conditions, I can really see the crossover Cooper SD Countryman increasing its sales significantly.

All Cooper SD models are equipped as standard with a lightweight but stronger six-speed manual 'box. With so much torque on tap it is quite easy to drive these new models without the need to use all six gears and 'block changes' make long hours of busy driving life even easier.

A six-speed auto is available as an option and includes shift-paddles on the steering wheel for those of a sporty nature. All SD versions, incidentally, have a Sport button which sharpens the accelerator response and firms-up the steering (for auto versions, it also modifies the gear change points for even more enthusiastic driving). While for added refinement, the new diesel unit features the same torque-steer management software recently added to the petrol models.

Echoing the distinctive style of the Cooper S, all SD models feature a front apron with an extra-large air intake and the familiar bonnet air scoop while the tail is topped-off with an eye-catching roof spoiler. Another Cooper S garnish is the side indicator surrounds emblazoned with the 'SD' motif.

Leather upholstery is one option (from Ł1,250) but the most popular Chili Pack, already taken up by over half of MINI customers, costs an additional Ł2,515.

Over and above that there's a Media Pack (Ł1,535) which includes Bluetooth connectivity, SatNaV and MINI Connect — an innovative 'phone-based SOS alert and rescue system.

Against? ALL4 Countryman models lack the traditional go-kart handling abilities of the MINI Hatch and are expensive when options are taken. Offsetting that, you get more power, huge torque, improved diesel performance, less tax costs than the petrol-powered Cooper S, high build quality and desirability capped with a premium brand image.

My test Cooper SD ALL4 Countryman had over Ł5,000 of these extra cost items fitted which brought the price to nearly Ł30,000. At that point in the test drive proceedings the added grunt came from me, not the test car! — David Miles