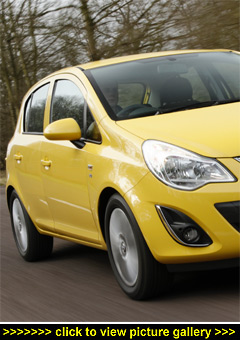 “The Corsa is Vauxhall’s top-selling
model and a near-permanent fixture
in the UK’s top-three best-sellers’ list.
Looking good with a new face, the
‘supermini’ hatchback range is set to
shine further thanks to some vibrant
new colours inside and out...”

FOR THE EAGLE-EYED, the revamped new Corsa's standout feature is a signature chrome bar stretching across a more prominent, wider and lower front grille crowned with Vauxhall's new-look Griffin badge.

Framing the Corsa's new 'smiley' face are a pair of 'Eagle-Eye' headlamps. The headlight units have a chrome finish and include daytime running lights as standard across the range. New chrome-finished fog lamps and housings complete the picture at the front-end.

And enhancing the Corsa's fresh look are five new exterior colours — Lime Green pearlescent and Chilli Orange metallic add some visual zing, with Guacamole completing the pallet of all-new Vauxhall colours. Sunny Melon makes a return to the range, while Pepperdust metallic is carried across from the new Meriva line-up.

Outside, there are new 16-inch alloy wheels on both SE and SXi models, while the 189bhp VXR runs on 18-inch alloys modelled on the design of the optional 20-inch wheels worn by the Insignia VXR.

Even before the latest exterior and interior design changes were made, the Corsa had already benefited from a long list of significant upgrades to its chassis and powertrains. Certain ecoFlex engines now feature Vauxhall's Start/Stop technology which has, for instance, reduced emissions on the 93bhp 1.3 CDTi ecoFlex 3-door model to just 94g/km and improved the Combined Cycle fuel economy to 80.7mpg.

To maintain its success in the supermini class, Vauxhall's engineers also made important revisions to the Corsa's steering and suspension set-ups. Softer springs were employed in the front suspension with revised damper settings, mated to an anti-roll bar with new bushing to improve the previous 'choppy' ride and control characteristics.

When compared to its rivals (the Fiesta, Britain's best-selling car, the MINI, VW Polo and Peugeot 207) the latest Corsa is best when chosen with a higher level of specification. Low spec models are a bit short on standard-fit equipment compared to the competition and these days it's a price-sensitive marketplace. Vauxhall dealers are very aggressive with their pricing, so what might look expensive on the price list shouldn't prove so costly if customers haggle hard enough.

I have just spent a week trying the Corsa 1.3 CDTi ecoFlex 74bhp 5-door model in the high level Limited Edition specification. This model is priced at Ł16,330 — expensive on the face of it, but the informative What Car? magazine's target price is nearly Ł2,000 less than that figure.

Packaging a sports specification with a low-emission engine is a brave move but it's a sensible one. The customers get a sporty, small five-door hatch with visual 'attitude' but it won't cost a fortune in fuel, tax or, with a group 5 rating, insurance. Should the young business entrepreneur fancy one, then company car tax is a not very punitive 13 per cent.

The 1.3-litre CDTi engine has a relatively low 74bhp power output but with 140lb ft of torque from 1,750rpm. With a top speed of 101mph and zero to 60mph acceleration of a long 13.9 seconds, the emphasis is clearly on fuel frugality rather than speed. Officially this model will return 67.3mpg in the Combined Cycle — my test drive, over all types of roads and conditions, returned an average and realistic 54.3mpg. With CO2 emissions of 112g/km — not sub-100g/km because of the specification and weightier spacious five-door body style — the VED road tax is Ł0 in the First Year and then just Ł30 per annum.

So the specification is right, the running costs are very attractive and the purchase price, with a bit of haggling, will get the customer a really good looking sporty five-door hatchback.

The downside is that the 1.3-litre, four-cylinder common-rail turbodiesel engine is noisy, very slow revving and the ride very firm because of the sports suspension and larger wheels with lo-pro tyres. You also get a firm ride, sluggish performance, the thick front A-pillars hinder visibility and the metal-faced rear seat backs are not covered with boot carpeting and so can damage luggage or parcels. Consequently it needs a hefty discounted purchase price to add icing on the cake.

Fancy one? Then drive a hard bargain with the dealer but be prepared for a hard ride that isn't harsh on the pocket for running costs. — David Miles