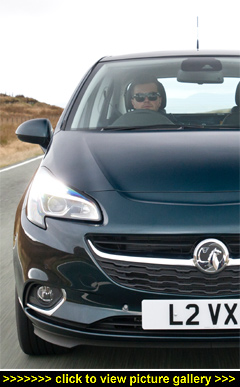 “Vauxhall’s Corsa is one of the UK’s
top-selling superminis. On sale since
January 2015, and helped by lower
prices starting at Ł8,995 for three-
door versions and Ł9,595 for those
with five doors, the latest generation
Corsa looks set to continue the
model’s sales success...”

AMAZINGLY THERE ARE CLOSE TO a hundred different versions for Corsa buyers to choose from, taking in nine trim levels and power outputs from an economical 64bhp all the way to 202bhp for the 143mph VXR version that arrives in showrooms this May and which rockets to 60mph in just five seconds.

Externally these new Corsa models are a breath of fresh air — a wide grille fronts up the redesigned bodyshell, running back along a rising waistline and sculptured doors to create a coupe silhouette finished off with a neatly-chopped tail. Overall it scores well on kerb appeal and sits confidently alongside more expensively badged cars in any car park.

Open a door — they're all of a good size and open wide — and you'll see that the new Corsa's two-tone inside is equally fresh and inviting. The fascia flows cleanly across the cabin, seamlessly incorporating a 7-inch touchscreen infotainment display into the centre-stack along with easy-to-operate rotary controls for the efficient AirCon. Fit and finish is good throughout, enhanced by the high gloss black trim of the touchscreen and gearlever surrounds and repeated on the door panels.

The seats are well shaped and comfortable and feature embossed cloth centre panels, the gearlever is close to hand and it's an easy changer, the left-foot rest is well sited, and the heated seat section runs from the forward edge of the seat base all the way up to your shoulders plus it's fast-acting and very warming without being too hot. Both front seats are height adjustable as, too, are the front seatbelts.

A good driving position is easily set and affords excellent visibility to the front, sides, and also to the rear — a view helped by a wide rear screen and slim three-quarter panels.

More good news: no more broken fingernails when adjusting the headrests — the Corsa's have a button on the side that you press in to slide them up or down. So much easier!

Other neat touches include the flick in/out rubber divider that can either be configured as a cupholder or used to partition the open tray ahead of the gearlever, close to an Aux-in jack, USB connection with iPod control, and a 12v socket.

The instrument pack consists of two main analogue dials — speedometer on the left and rev-counter on the right, both with stand-out clear white on black figures and sharp red needles; fuel and temp readings are digital bar strips above the main dials where they're easily read at a glance.

A driver's information screen separates the speedo and rev-counter to provide all the usual trip and range data along with a speed warning, traffic sign memory, safe following distance advice, and digital speed readout — one day soon all cars will have them and motorists will at last be accurately informed of their road speed in every glance. Expected in a top-line car, it's commendable to see this in a mainstream supermini. Good thinking, Vauxhall!

Classy is not too strong a word for the Corsa's inner ambience. And if you like to feel 'wired' then you'll welcome the IntelliLink connectivity and infotainment system with digital radio — and it's standard on most models.

While the three-door Corsa is more dramatic in the looks department, the five-seater's five doors give it the edge in practicality. The 4-metre long body is now also roomier for rear seat passengers; those travelling in the back seats enjoy easy access and entry and once settled have a choice of two backrest positions and a fist of headroom along with comfy headrests. Knee room is okay, plus there's also decent foot room.

A powered one-shot tilt 'n' slide glass sunroof with a mesh sunblind adds to the cabin's pleasant atmosphere whether you're travelling in the front or the back.

Fold the 60:40-split seatbacks and luggage space jumps from 285 litres to a useful 1,120 litres for those occasional but essential visits to DIY stores or garden centres.

A two-level boot adds extra flexibility: set to its higher position, the boot floor sits level with the folded seatbacks and the load sill. Combined with a high-opening tailgate the level loadbay floor makes for hassle-free loading and unloading.

While there are plenty of engines to choose from, the new version of Vauxhall's turboed 1.4-litre four-cylinder petrol unit offers a well-judged compromise between performance and frugality. Backing up its easygoing 98bhp is a dogged 147lb ft of torque that's freely on hand from 1,850 through to 3,500rpm and consequently offers a good shot of low- to mid-range oomph.

On motorways the 1.4 Turbo feels long-legged and relaxed; pick up is willing in fifth and sixth without any need to drop down a gear. All of which helps it to remain pretty much hushed at cruising speeds.

Make good use of the gears — easy and encouraging thanks to the slick-changing, six-speed manual gearbox — and its eagerness increases noticeably as you pass the 2K mark on the rev-counter. Moving swiftly up through the ratios will see you posting an 11-second 0-60mph time. Top speed is 115mph — satisfactorily more than you need for driving on the left.

As for the frugality... Officially the 1.4 Turbo returns 53.3mpg with 43.5 around town and 62.8mpg touring. Our hard driven test car recorded a pretty good 46.4mpg — a figure less ardent drivers should be able to nudge over the magic 50mpg barrier. And with emissions of 123g/km, there's no road tax to be paid for the first year although from the second year onwards it will be Ł110 annually.

And if you don't want the Stop-Start to do its bit for economy you can always turn it off — admittedly there are times in crawling stop-start traffic that you might want to leave it off for a while but it does make sense to leave it on. Besides, it works so smoothly and it really does help maximise economy.

Over the past few years Vauxhall has acquired a reputation for making cars that are in sync with the way most people like to drive them. Not only does the 1.4 Turbo engine fit nicely with that rep but underpinning the new looks is a redesigned platform and suspension that's been fettled in the UK to deliver ride and handling that suits unique British roads.

The speed-sensitive, power-assisted steering has been similarly tweaked, the better to take on the twisties that criss-cross our green and pleasant land. And to ensure you enjoy making the most of it there's a sporty three-spoke multifunction wheel (cruise, speed limiter, phone, and audio) with a good-to-hold leather rim. Most Corsas come with a 'Comfort' spec chassis although a firmer version is standard on sportier models such as the SRi.

The SE's platform, however, favours comfort; and it's fine and dandy. The helm is precise and the brakes (ventilated discs up front; solid discs at the rear) are reassuring and nicely progressive. So when you feel the need for speed you can definitely have some fun while remaining in control and enjoying it without going OTT. Which in the real world is exactly how most people like it.

With prices down and fuel economy up, the smart-looking new five-door Corsa is family-friendly in terms of versatile space and comfort, is happy around town and on long motorway trips, and more than capable of serving up enough driver satisfaction to generate a smile. A very together package. — MotorBar