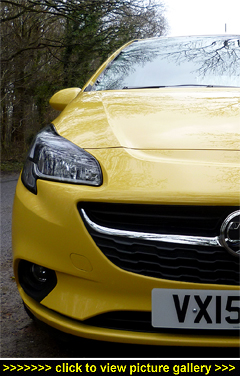 “Vauxhall’s latest Corsa supermini
is well suited to the Flaming Yellow
paintwork it wears with a cheeky grin
because it’s a fun colour — and this
new Corsa is surprisingly good fun
to drive...”

IT'S DEFINITELY A 'SMILER' with a wide-mouthed grille and a horizontal chrome badge-bar that turns up at the corners. The headlamps, with LED daytime running lights, are fashionably sharper with cut-out lower edges. A strongly defined crease runs above the door handles, emphasising the rising waistline before it disappears over the rear shoulders into the large rear taillight units.

From behind the heated, three-spoke, leather-wrapped multifunction steering wheel (cruise, speed limiter, phone, voice, and media) the new cabin is a step-up over the last one. The fascia is clean and classy and glammed-up by a satin chrome and high-gloss insert that runs right across the dash; the instrument cluster is crisp and neat with a digital driver's computer display between the white-on-black analogue rev-counter and speedometer.

Thoughtful touches include a damped glovebox lid (for which your front seat passengers will be forever grateful) and the unexpected but very useful slide-out A4-size tray out of sight under the front passenger seat.

A good driving position (assisted by a driver's seat height adjuster) provides fine visibility to the front and sides; even to the rear courtesy of a wide and deep rear screen. The all-weather-comfortable fabric seats are supportive and offer good shoulder support, and the average driver has a fist of headroom. Height-adjustable seat belts ensure a fine fit whatever your body size.

Keeping you connected to your world outside the cabin is Vauxhall's IntelliLink. Using a large, clear, simple-to-use seven-inch touchscreen multimedia system, it 'mirrors' your smartphone — and can be controlled via apps such as BringGo (navigation), Stitcher and TuneIn (for global radio channels and Internet podcasts).

The system is compatible with both Apple and Android phones, and incorporates additional features such as voice command, Bluetooth, Siri Eyes Free and FlexDock (for locating/charging your mobile). So it's a resounding Yes to audio streaming and in-car calls, as well as a selection of useful apps.

The five-door version offers space for families both in legroom and with its three-in-a-row accommodation. Legs can be stretched thanks to generous foot room under the front seats while scooped-out front seatbacks provide decent knee-room.

The rear doors open wide for easy access, particularly to child seats which can be fitted easily to both 'outers'. The rear bench is actually unexpectedly comfortable and paired with a light and airy rear cabin and comfortable backrest angles makes travelling in the back a perfectly pleasant experience. And the wind-up rear windows won't wind you up!

The regular-shaped 285-litre boot will easily swallow a family's weekly shop, and the drop to the boot floor over the load lip is short and not a problem. Higher-spec versions get split-fold rear seatbacks but even the all-of-a-piece backrest of our Excite trim test car was fine, folding close to flat (but leaving a short step-down to the boot floor) for those times you might want to haul something larger than grocery bags.

Adding some sparkle under the bonnet is Vauxhall's new three-cylinder powerplant, the 1.0iT. On paper a 'tiny triple turbo', it can punch well above its 998cc — a petrol engine, it's still pretty green with a low 115g/km of emissions, which keeps the road tax bill at just Ł30 per annum for the second year onwards (the first year is free).

Tested here is the peppy 113bhp (115PS) version. It's strongly backed up by 125lb ft of responsive torque that's delivered from 1,800rpm and stays with you all the way to 4,500rpm and which keeps the three-pot willing to accelerate almost regardless of which gear you're in. Better still, and unlike some three-cylinder units, there's not a trace of 'buzz' from Vauxhall's new 'triple'; indeed, it's noticeably smooth, and agreeably quiet when cruising at the legal limit — all of which contributes to a pleasantly non-demanding drive. For the technically-minded, this little three-pot is the only such unit on the market fitted with a balancer shaft to reduces noise, vibration and harshness.

For the record, an Eco Stop/Start system it fitted to help stretch the mpg (officially 56.5mpg for the combined cycle) but you can turn it off should you prefer. We averaged 48.7mpg driving over mixed roads with it switched off.

Whenever you want more punch the 1.0iT is more than game: use the revs and the easily-selectable six gears of the new lightweight six-speed manual 'box and you'll find that there's enthusiastic pick-up-and-go for safe overtaking.

If that 0-62mph figure is important to you then know that it's done and dusted in a shade over ten seconds (10.3 to be precise) while the 121mph top speed is more than most drivers will need, even driving down to Saint Tropez (better now the jet-set have decamped).

Power reaches the road via the Corsa's front wheels. The new model's suspension has been comprehensively modified and there's a speed-sensitive electrically-assisted steering set-up; between the two there's a fresh incisiveness to the Corsa's behaviour. It helps too that UK market cars get a unique suspension and power steering set-up to the rest of the world — one that's specifically tailored to our twisted and more demanding roads.

Push on and you'll find the Corsa to be grippy with a neutral balance and minimal body lean, and the helm agreeably light but sharply consistent — in fact, punting this faithfully handling Corsa around is surprisingly entertaining in a positive supermini way.

Vauxhall's engineers have also managed to not trade away much when it comes to handling versus ride: the five-door's ride comfort is pleasingly good over most blacktop. Overall it serves up a handling and ride mix that makes the Corsa an agreeable and easy car to drive wherever the road takes you.

With Corsa prices starting from around Ł9K, this new fourth-generation supermini from Vauxhall is better in every respect. Comfortable and well kitted out, it trumps its well-loved, best-selling predecessor and is most definitely 'good to go'. — MotorBar