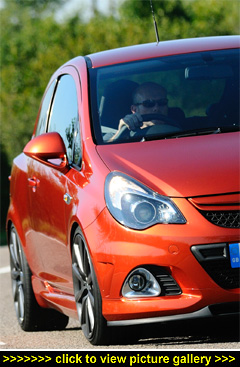 “Numbers never tell the whole story,
whether it’s a woman’s age or a car’s
0-60mph time. Vauxhall’s Corsa
Nürburgring rockets to 60mph in 6.5
seconds — but what truly impresses
is this pocket-rocket’s naughty but
nice hardcore handling...”

NÜRBURGRING. Its rep as the world's toughest race track is well-earned. So you'd expect any car daring to wear 'Nürburgring' badging would be a no-fear road warrior. One able to deliver thrills a-plenty. Next question: can a Vauxhall Corsa wear such a badge with pride?

Yes. Without a doubt. And it's not just the numbers — 202bhp and 206lb ft of torque on overboost from its turboed four-pot 1.6-litre engine — that give it an addictive twist. What really makes this über-hot-hatch so entertaining is the wide-ranging tuning by OPC — Opel-Vauxhall's performance division.

It's a sad truth that any fool can go fast in a straight line. But the last thing OPC could be called is foolish. Because in addition to wringing even more firepower out of the 'donor' engine unit from the already quick Corsa VXR, they've fine-tuned the suspension and drivetrain to ensure that drivers can fully, effortlessly and enjoyably exploit the Corsa Nürburgring's tearaway performance. Not just on the track (where it loves to party) but on the public roads.

The engineering makeover is thorough and includes a lowered ride (by 20mm at the front; 15mm at the back), progressive springs and inverted Bilstein monotube dampers, lightweight Brembo brakes, lightweight forged alloys, stainless steel sports exhaust, and a revised turbocharger and some ECU remapping. Plus, the pièce de résistance, a Drexler mechanical multi-plate limited-slip differential on the front axle.

The ABS, traction control and Electronic Stability Programme systems have also all been recalibrated to accommodate the Nürburgring's more potent set-up.

It's this LSD that turns the Corsa Nürburgring into such an entertaining beast — like the light switch on your wall, you don't need to know how it works, just that it does. Without it, stamping on the accelerator would have the front tyres lighting up like the Fourth of July. With it they don't; the limited-slip differential cuts understeer and ensures optimum traction at all times, keeping the Nürburgring's handling act all very nicely balanced.

Other key dynamics are all in synch — body movements are tightly controlled; the steering is sharp and quick (think about turning and you've turned); and stability is impressive. And the Brembo brakes are first rate — progressive and very powerful and, when needed, they really wipe off the speed without drama.

But that LSD really is a king-maker: press harder on the loud pedal early into a fast corner and instead of running wide like a front-driver will, the Nürburgring's nose just tightens its line and yanks you round and through, accelerating away with gusto.

And it's precisely at this point that you can seriously answer the biggest question hanging over this hot-hatch's metallic orange roof: Can any supermini really justify a Ł22K price tag? The answer comes back right away: Yes! This limited edition Nürburgring Corsa justifies itself so well, you'll be grinning from ear to ear as you sign the cheque.

The turboed 1.6 has a lot of bottle and it likes to rev and, irrespective of which of the six easily-selected gears is currently engaged, there's always eager in-gear urge whenever you press down with your right foot.

Accompanied, thanks to the stainless-steel sports exhaust, by a satisfying crackle from the tailpipes as the needle whips round the rev-counter to the 6,500rpm redline.

For the record, unless you're piling on the revs, the Nürburgring's cabin is generally a pretty quiet place to be.

The official average fuel economy figure is not bad for a 200+bhp car: 37.2mpg. Drive it with some brio, as we did, and you'll probably get the same 29.7mpg as us — in anybody's book that's still very good value entertainment.

But at heart this is unmistakably a driver's car — take one look at the shell-backed Recaro front bucket seats sporting embroidered 'Nürburgring' logos and that much is obvious. They offer a wide range of adjustment and their heavy bolstering ensures a snug fit. Once buckled in, they're comfortable (they're also heated!) and hugely supportive and do a fine job of holding bodies in place.

The three-spoke flat-bottomed sports steering wheel has generous reach and height adjustment. There's also a good amount of elbow room — useful for twirling the wheel during spirited driving. Front and side visibility is fine, and there's a lap timer for trackday satisfaction.

Nice touches include the indicators: a gentle pressure activates them but press hard in any direction and they cancelled immediately.

While it's a driver's car, that doesn't preclude passengers. Obviously the front passenger will be as well accommodated as the driver; rear passengers get nicely padded seats (three headrests and belts mean three in the back is both legal and doable), a good rake on the rear backrest and a fair amount of room in all directions plus easy access through the wide-opening front doors.

And it's still as practical as a bog-standard Corsa with cup-holders and sufficient in-cabin storage. Cargo can be handled as easily as sharp bends, thanks to the 60:40 split-fold back seat that extends the 285-litre boot into a 1050-litre loadbay with an almost flat floor. The two-tier boot also offers additional deep, out-of-sight storage.

It wouldn't be too much of a surprise to find that the fly in the ointment was a rock-hard ride. Of course it's firm; you're well aware of the state of the blacktop under the rubber-band-thin, ultra-low profile tyres. But it's not harsh or crashy — but do slow for speed humps! In fact, this is a ride you could easily live with on a daily basis. And even if it wasn't, quite frankly Nürburgring drivers will be having too much fun to give a damn.

This ultimate Corsa has real fire in its belly and on dry tarmac will be one of the fastest B-road drives in its class. For many keen drivers, that will be all they need to know. But there's more good news: hottie that it is, the Nürburgring still comes with Vauxhall's Lifetime 100,000-mile warranty. Ł22K for something so entertainingly quick and focused with peace of mind thrown in seems like a very good deal. Bite the hand off! — MotorBar