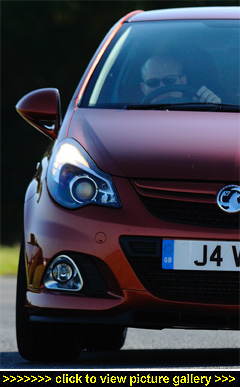 VAUXHALL'S CORSA SUPERMINI range takes in both three- and five-door models and offers a vast array of engine and trim choices, which helped it into third place in the UK's Top Sellers list last year, although this was more down to function rather than fashion…

Yes it does the job all right, functionally and in most cases frugally but, like Tina Turner, it needed a 'hero' to inject some charisma into the Corsa's image. MINI has already gone down that road, successfully, with their John Cooper Works variants, as too has Renault with its RenaultSport and Cup models and also Ford, with its ST and RS versions.

When Vauxhall introduced the 1.6 VXR Corsa it upped the Corsa range's perceived image by a fair margin. The VXR used its 189bhp to hit 140mph and the benchmark nought to 60mph in 6.8 seconds. While the figures impressed, the VXR was not edgy or spicy enough for some hardcore hot-hatch enthusiasts.

To satisfy the need-for-speed cognoscenti, Vauxhall has gone the extra mile and created the VXR Nürburgring of which just 250 will be available to thrill-hungry Vauxhall fans this year. So get your wallet out quickly and hand over the necessary Ł22,295. But be warned, only talented drivers should apply…

Powering the Nürburgring is a reworked version of the Corsa VXR's turbocharged 1.6-litre petrol engine that now produces 202bhp, runs to 143mph and does zero to 60mph in 6.5 seconds. For good measure, torque has also been hiked up — from a maximum in the VXR version of 196 to 206lb ft (from 2,250rpm) in the Nürburgring.

Looked at on paper, the additional performance doesn't seem that much more for the extra money but in terms of challenging driving pleasure the difference is enormous. Compared to the 'standard' VXR Corsa, the Nürburgring is well and truly de-sanitised — it's now a real hot street or trackday racer. And it can really bite back if it's not treated with respect by an over-enthusiastic or less talented driver.

To harness the Nürburgring's extra power, Vauxhall has fitted it with a mechanical, multi-plate limited-slip differential to make sure that its 202bhp doesn't go up in a cloud of tyre smoke and to provide optimum traction at all times. Understeer is reduced and quite dramatically so — the more throttle the driver applies through a bend, the more the Corsa Nürburgring grips!

My brief test drive took place on public roads littered with 50mph restrictions and speed cameras, and the road surface was also cold, wet and very greasy — conditions that induced dramatic torque-steer on take-off although the chosen line taken through fast corners seemed to be held without any of the notorious front-wheel drive understeer associated with very quick superminis.

It was refreshing to drive a challenging car not sanitised by the interfering software found in the majority of modern-day diffs and stability programmes, and which artificially 'tame' power.

The Nürburgring's chassis received its final sign-off at the Nürburgring's notorious Nordschleife (North Loop) road-race circuit — and for which Vauxhall commissioned Bilstein to develop bespoke spring and damper units specifically for this top-ranking VXR.

A visual clue of this work — that allows drivers an even higher degree of control and involvement — is the reduced ride height; down by 20mm at the front and 15mm at the rear.

A set of newly-developed Brembo brakes, 30% lighter than before and with high-performance brake linings covering a 10% larger area, complement the chassis mods. Additionally, the ABS, Traction Control and Electronic Stability Control systems have all been recalibrated to take into account the Nürburgring's uprated set-up.

Open the door and sill plates trumpet 'Nürburgring' in black-and-red lettering. Look further and you'll find Recaro shellback sports seats with bespoke white stitching on the leather as well as on the handbrake and gearlever. This is not stripped-out racer so all the usual top-of-the-range equipment is there: air conditioning, three-spoke flat-bottomed sports steering wheel, multifunction sound system, electrically-operated door mirrors and windows, cruise control, and on-board computer.

Although my very brief time behind the wheel was in far from ideal conditions, it was nonetheless eye-opening — it's gratifying to see a move away from tame (but admittedly efficient) small cars.

Officially, this Nürburgring scorcher will average 37.2mpg; the best I could manage on my relatively sedate test drive was 27.1mpg. And in real-life the day-to-day figure will be even lower if the Nürburgring is driven in the way it's designed to be.

At 178g/km, CO2 emissions are relatively high for a car of this size and it's reflected in the road tax: Ł315 for the First Year and Ł210 annually thereafter. A 34D insurance rating reflects the potential for this car not to be the ideal choice for well-heeled young but inexperienced drivers. It will bite them; and not just in their wallet.

But while this Nürburgring Corsa is nearly two and a half times the price of the cheapest Corsa, it's at least 100 times more fun! — David Miles