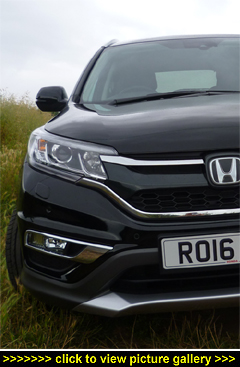 BUT IF IT'S AN ÜBER-PRACTICAL, family-friendly five-door, five-seat SUV you're after, then the latest CR-V should definitely be on your shortlist not just because its already one of the most popular SUVs sold around the world, but because it now has a new diesel engine and nine-speed automatic transmission, an all-new connectivity and infotainment system, and an enhanced suspension set-up for a more pleasurable drive.

For load-luggers, the tour de force starts around the back. Watch as the powered, high-opening tailgate rises fast and you'll find yourself staring into a massive 589-litre boot — more than big enough to swallow every last case of a family's holiday luggage.

Handy, too, are the tailored rubber boot liner with high sides to contain spillages or wet loads and the easily removed lightweight luggage blind. For the record, the powered boot can be open and closed using either the tailgate handle, the key fob or a button on the dash.

Fold down the rear seats, a straightforward one-motion manoeuvre either in-cabin or by pulling the levers in the boot, and the CR-V offers a completely flat-floored loadbay capable of taking a huge 1,669 litres of cargo.

And with a load length of up to 1,570mm, two mountain bikes or four sets of golf clubs can easily be carried. And, yes, of course there are bag hooks — sturdy 3kg ones. And if you want to load 'outside the box' then just hook up a trailer to the 157bhp 4WD model and you can haul 2,000kg.

As much as you might cherish space per se, you'll still want it packaged in a smart-looking 'box' — fortunately the recently face-lifted CR-V is about as far visually from a 'box' as it's possible to find. With its sleek wraparound headlamps and boldly thrusting chrome-and-gloss black 'spread wing' grille fronting attractively clean-cut body styling, the CR-V has more than enough kerb appeal to stand its ground in the styling stakes.

Step up to the driver's door and climb easily aboard. First impressions of the cabin in three words: 'inviting', 'airy', and 'premium'. All refreshingly uncluttered and with an attractively ergonomic and easy-to-use dash with minimal switchgear. The curved lower fascia is a stylish flourish, underscoring the infotainment touchscreen and dipping down to the automatic's high-set selector lever. Trim is tasteful and of obvious good quality, enhanced with a tactful amount of metallic highlighting. Classy!

Entertainment and connectivity is also very well addressed: playing on the crystal clear seven-inch touchscreen is Honda's well-specced 'Connect' audio and information system. Key features include DAB / FM / AM and internet radio, hands-free Bluetooth, in-car internet browsing, Garmin SatNav, and a rear-view parking camera. Connect runs Android 4.0.4, the world's most popular Smartphone operating system and the high quality graphics and seamless, rapid operation are down to it having one of the fastest processors (NVIDIA's automotive grade Tegra 3) in the industry.

Easy and intuitive to use, employing the familiar 'pinch, swipe and tap' functionality of a Smartphone, the display can be customised to suit individual's preferences with two different 'skins' to choose from, allowing users to make the system their own. Navigating through the touchscreen menus is quick and simple.

MirrorLink ensures seamless connectivity between the system and the user's compatible Smartphone, giving them access to their favourite apps. Connect also comes with pre-installed apps such as Aha (providing access to thousands of audio stations as well as social media feeds and location-based services), with others available for download from the Honda App Centre.

The easy-to-use Aha interface makes finding everything from a Twitter account to weather updates as safe and easy as the push of a button. Aha also facilitates point of interest searches, helping users locate, for instance, the nearest restaurants or hotels.

The nicely bolstered, soft-leather trimmed seats are comfortably supportive and you sit high for a fine view of the road ahead as well as to the side through deep windows. There's plenty of elbow room and a large well-padded sliding central armrest with equally well-padded outer armrests on the doors. Headroom is generous but then the CR-V stands 1,650mm tall. From behind the sporty three-spoke multifunction (it's got the lot) wheel the CR-V is a doddle to place in traffic in spite of its two-metre width.

Also between the driver and front passenger is a multi-adjustable trio of cupholders and a big deep bin under the armrest. Driver information comes from a large speedometer dead-ahead of the driver that's flanked by a rev-counter to the left and a fuel gauge to the right. Other in-cabin stowage is sensibly accommodating with a spacious glovebox and real-world door bins, each supplemented by a second tray perfect for smaller mobile-sized items, change, etc.

Other plus points include the two driver info displays (one in the upper fascia above the infotainment screen — which shows speed warnings and road signs, etc — and one in the inner section of the speedo), the 'trad' handbrake (still preferred by the majority of drivers), the efficient climate control that does a very fast icy cold, the high-set joystick-like selector lever that's a delight to use with Sport mode a mere side-flick away, and a separate transmission Park button at one o'clock to the selector knob.

The CR-V's Collision Mitigation Braking System combines both camera and radar technology (and can recognise pedestrians and vehicles) and will, if necessary, supply high and low speed braking to bring the car to a standstill.

It's also the first vehicle in the world equipped with a predictive cruise control system, known as Intelligent Adaptive Cruise Control (i-ACC), capable of predicting and automatically reacting to other vehicles 'cutting-in' to 'your' lane.

Traditional ACC systems keep a pre-selected longitudinal velocity, which is only reduced to maintain a safe distance from a car in front. However, if a vehicle darts across from a neighbouring lane these systems only react when the manoeuvre is almost complete. Impressively, i-ACC is able to detect the likelihood of a cut-in up to five seconds before it occurs, and is therefore designed to react very smoothly so as not to startle the driver, who might not yet be aware of the imminent cut-in.

In this case the system applies just a mild brake initially, with an icon appearing on the driver display, informing the driver why a slow-down occurs. It then proceeds to apply a stronger brake to adapt velocity to keep a safe distance. i-ACC is even intelligent enough to recognise which side of the road your vehicle is on and automatically detects which neighbouring vehicle is the most critical to be aware of at any given moment.

Most CR-Vs come with four-wheel drive (just five out of the line-up's seventeen models are 2WD) which, of course, improves both safety and roadholding. As to engine choices, there are three: a 2.0-litre petrol with 152bhp and a 1.6-litre turbodiesel with either 118bhp or 157bhp (160PS). The high-power 157bhp diesel comes partnered with a new nine-speed automatic transmission.

With the 2.0-litre petrol models returning official consumption figures of between 36.7 and 39.2mpg in the Combined cycle and the 1.6-litre diesels giving between 55.3 and 64.2mpg, it's no surprise that the majority of buyers will be going diesel. For those keen to maximise their mpg there's a green ECON button on the dash — press it to drive in the fuel-stretching Economy mode.

The diesel to go for is the more powerful 157bhp model. It's a nice engine, this new four-cylinder turbodiesel, marked out by its good refinement; and it remains so right up to the red-line while dishing out its 157bhp and 258lb ft of torque.

The pace is strong for a 4x4 SUV, and the auto's changes up and down all agreeably fluent. The main benefit of nine gears is the wider spread of ratios, so stepping-off the line is eager thanks to a lower first gear than would be possible in a traditional six-speed set-up; at the other end, a high top gear helps optimise fuel consumption and minimise noise levels at cruising speeds. In between there's obviously more gears for the best, most linear response to the driver's right foot.

For a family vehicle to do its job it has to have a spacious rear cabin. In a CR-V, 'space' can be taken for granted — three adults can travel side-by-side in the big seats with no complaints even over long distances so youngsters are even better served, plus there's room to get them smoothly in and out of child seats without needing a shoehorn!

Wide-opening doors make getting in and out hassle-free, there's loads of leg room, good foot room and a choice of two backrest angles means passengers can really stretch out. Big, wide and padded, the central drop-down armrest holds two cups and rear air vents in the centre console add to the pleasant ambiance.

The CR-V's underpinnings and suspension have been upgraded and it now rides and handles better, with bumps soaked up without any drama. Grip too is reassuring, as is the accurate, quicker-acting steering and together they deliver more cornering agility. Overall it's an easy car to drive — particularly with the autobox taking the strain — and it feels as polished making headway through heavy traffic as it does cruising at the legal limit.

No question that the CR-V is an established family favourite — and this latest version is all the better for its upgrades. It offers oodles of room for adults as well as extremely versatile load-lugging abilities and is without doubt one of the most practical SUVs you can buy. Best of all, its refined demeanour, even in the very worst of rush-hour traffic, makes it a fine place to be whether you're at the helm or just along for the ride. ~ MotorBar