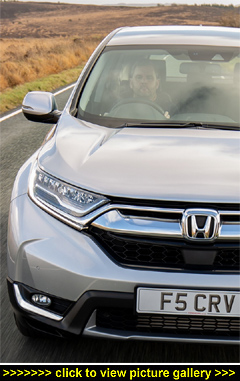 “For years Honda’s CR-V has proved
hugely popular — enough to
make it the world’s best-selling SUV.
Now in a new fifth-generation
it’s even nicer to drive, decidedly
plusher and big enough to offer
a seven-seat option...”

SUV BUYERS CAN, broadly speaking, be divided into four camps: first, those buying into the whole 'high-riding' lifestyle thing; second, those duty-bound to make the school run; third, those needing something to tow a horsebox or caravan; and lastly, those with an escapist weekend agenda that calls for plenty of 'gear' and the ability to get it off the beaten track.

As to this last task, the CR-V can be had in either two- or four-wheel drive so you've got the choice of horses for courses. Looks-wise this reborn CR-V incorporates all the cues expected of a SUV but melds them together seamlessly with more muscular wheel arches and focused body contouring around the nose and tail — it's got street presence all right but leavened with a tech look to the headlights and taillight architecture that definitely gets your attention.

There are sleek side-steps although most won't need them because the doors open wide, the apertures are large and the seats' hip-points are set just right — a quick 'perch-and-swivel' and you're in. Several things immediately grab your attention: the amazingly roomy cabin (loads of legroom and more than a fist of air between your head and the glass roof); the commanding seating positions and great views out; and the stylish cabin layout that's enhanced by upscale trim and materials and thorough attention to detail.

With this latest generation CR-V Honda has clearly taken the cabin further upmarket, and there's an inviting plushness to the interior ambiance with high-quality leather upholstery, plump comfy chairs and a pleasing dash layout with a high-level centre stack that places the selector lever close to the leather steering wheel rim and adds to the sense of being 'in command'.

You also get plenty of places to squirrel away personal 'stuff': a massive and ingenious storage unit between the front seats can be configured in three different ways — and it's roomy enough to swallow a laptop or even one of those über-large handbags A-listers use as canine-carriers for their 'emotional support animals'. To that you can add extremely accommodating bottle-holding door bins, large dual-use cupholders that helpfully adjust to your takeout size, a large open tray, real-world glovebox, and a drop-down sunglasses box.

The front passenger enjoys power lumbar and manual height adjustment while the driver gets full electric seat adjustment including four-way lumbar together with loads of reach and rake for the sporty multifunction wheel (commendably, all the different wheel-mounted controls are easily identifiable by feel and well as visually so easy to get the one you want first time, every time when on the move). A two-setting seat and mirror memory recall takes the hassle out of sharing driving duties.

The view from the helm is excellent; you can see clearly down the bonnet plus the large side windows and slim A-pillars make placing the CR-V a breeze. Appreciated, too, are deep sun visors that really do keep the 'dazzle' at bay. The crystal clear instrument panel is easily customisable so you can see as much, or as little, as you wish; even better is the pin-sharp head-up display that's set perfectly in your field of vision and keeps you in touch with not just your current road speed but the posted limit too. It's not until you use one of these that you realise just how many times you inadvertently stray over the limit. Every car should have one.

As expected, comms are up to speed: Apple CarPlay and Android Auto enable straightforward smartphone interlinking plus there's a seven-inch infotainment touchscreen fronting Honda's Connect and the integrated Garmin SatNav that offers clear 3D mapping and spoken directions that will never leave you second-guessing. Voice commands can be used to control the navigation, phone, audio (including music searches), and climate control.

There's also the expected SOS emergency call system along with traffic sign recognition and plenty of HDMI and USB jacks (including charging ports front and rear). A DAB radio is standard and comes with a nine-speaker (with subwoofer) stereo unit. Bluetooth connectivity and an Aha app complete the spec.

The range-topping EX comes with all the bells and whistles — in addition to the many items mentioned elsewhere you also get a Smart Entry and Start system, leather interior, heated steering wheel, heated front and rear seats, dual-zone climate control (very quick and efficient), an auto-dimming rearview mirror (there's also a separate drop-down wide-angle mirror for keeping an eye on all your passengers), rearview camera with parking sensors front and rear, door mirrors that automatically tilt down for a view of the kerb when you're reversing, tinted glass at the front (plus privacy to the rear), ambient cabin lighting, powerfolding heated door mirrors, all one-shot power windows, and a set of distinctive 19-inch alloys.

It's not what you've got but how you use it. And Honda has definitely made maximum use of the extra space from the CR-V's longer wheelbase — passengers travelling in the rear gain extra legroom and can stretch out luxuriously. And even though they sit about six inches higher than those up front, headroom is generous (a full fist of it!). Even with the wide and well-padded, drop-down central armrest dividing up the back seats, this is still a big rear cabin with big chairs and masses of foot, knee and leg room. And with ample breadth to take three sitting side-by-side.

The seats are comfortably accommodating with a choice of backrest angles and both outers come with Jack Frost-trumping three-stage heating plus there are dedicated rear air vents, enough USB charging jacks to reassure social mobile addicts, built-in cupholders in the padded centre armrest, pouches on the front seatbacks, and bottle-holding door bins. It's not just spacious but airy too thanks to the extensive panoramic glass roof.

If your rear passengers aren't gaming or Instagramming they can indulge in some perfectly legal 'urban voyeurism' through the large side windows — or they can simply lean back, close their eyes and 'take five'. And for when youngsters must come too there are Isofix mounting on the outer back seats; thankfully getting them in and out isn't the hassle it can be on some rivals thanks to the CR-V's large rear doors that open to a full ninety degrees.

You don't have to motor far to appreciate the CR-V's smooth ride — despite rolling on 19-inch wheels shod with 235/55 Michelin rubber, the range-topping EX model dismisses most poor grade, lumpy-bumpy blacktop with the automotive equivalent of a shrug. Not that you'd ever deliberately drive over a pothole but if you do accidentally catch one the sky won't fall in — the CR-V just keeps calm and carries on. The 'softer' suspension is notably more absorbent than previously and combined with well-managed body control is clearly intended to put passengers at ease and keep them relaxed. Another big 'plus' adding to the interior's 'chilled out' air is the fact that little noise of any kind penetrates the cabin.

Anybody who is familiar with Honda knows that the Japanese carmaker knows how to make a car that handles well: even Honda's regular family hatchback the Civic is a game handler; and then, of course, there's its big brother — the cool-but-sizzling Type R. So it's no real surprise that this new CR-V delivers a more focused driving experience.

Significant beneath-the-skin improvements include a stiffer chassis plus some judicious fettling of the suspension and the steering. And the results are tangible on both the front-wheel and all-wheel drive models: the steering rack is quicker and the helm nicely weighted — this high-riding 4x4 drives more like a car than an SUV tipping the scales at not far short of two tonnes, breezing through the twisties responsively while delivering a well-mannered and confident drive on all roads. Crucially, whatever your personal driving style, the CR-V is unfailingly relaxing to drive — precisely what family-minded drivers will appreciate the most.

Boosting its easygoing driveability is a well-matched drivetrain. Like many other carmakers, Honda is evicting oil-burners from under its bonnets; in the CR-V's case, it has replaced diesel-power with a petrol-electric hybrid.

However, if you haven't yet kicked the unleaded habit you'll be more than satisfied with this turbocharged four-pot — a 1.5-litre VTEC unit that, paired with the CVT autobox, produces 190bhp backed up by 179lb ft of 'grunt' between 1,900 and 5,00rpm. Which is plenty whether you're stop-starting in traffic, hoofing it along faster A-roads or sailing down the motorway at half-term with the full household plus the family pooch.

The four-cylinder's character is smooth and refined so unless you have a bullying right foot you'll barely hear the oily bits working. Something else you won't be aware of — the shifts from the automatic CVT autobox.

As Constantly Variable Transmission's go, the Honda's is a nice one with seven 'steps' that's happy just left to its own devices. A Sport mode is never more than a quick nudge of the selector lever away but should you wish to intercede more directly (for instance; when towing or driving along flooded lanes or in other tricksy conditions) there are paddleshifters on the steering wheel for invoking manual control.

When specced with four-wheel drive, the autobox-1.5T combo pushes the CR-V to 124mph, chalking up the benchmark 0-62mph time in 10 seconds dead. Officially it returns 39.8mpg in the combined cycle although anyone with a light-ish right foot should do better than our hard-driven 37.9mpg test average. There is, of course, an Econ button to help you out.

At 561 litres, the CR-V's boot is big. Not only that but the opened-up loadbay is one of the largest in the sector at 1,756 litres. More good news: access is straightforward on several counts thanks not only to a handsfree powered tailgate but also a fairly low boot floor and a wide opening to load through. Usefully, in addition to the key, the tailgate can be opened and closed using the fascia switch without leaving the driver's seat.

A custom heavy-duty boot liner protects the floor but can be slid out in a jiffy for cleaning. Conveniently located in the boot's sides are levers to auto-release the 60:40-split rear seats. As they drop forwards and down, their bases lower in tandem with the backrests, folding neatly into the footwells in order to maximise the loadbay's height; once down, the extended floor is as seamless as it is completely flat. For those who need to tow, autobox CR-V models will haul a braked 1,500kg.

An appealing, spacious and highly-practical SUV that's a perfect fit with families, wrapped up in an urbane bodyshell that's large enough but not too large. It's also comfortable, easy and satisfying to drive and a genuine contender against the likes of well-respected offerings such as Land Rover's Discovery Sport, Peugeot's 5008, and Skoda's Kodiaq. ~ MotorBar