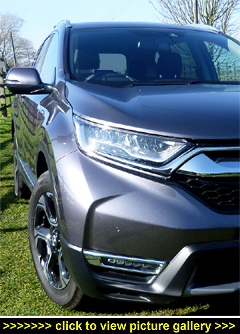 “The latest evolution of Honda’s
CR-V SUV hit the streets running at
the tail-end of 2018. The only thing
missing was a diesel engine; instead
you’ll now find new turboed 1.5-litre
petrol engines under their bonnets.
Also on the menu are 2WD and 4WD
plus a choice of either five or seven
seats. So far, so good...”

BUT IT GETS BETTER because just joining the 2019 line-up is the CR-V Hybrid with dual-power from a 143bhp 2.0-litre petrol engine working alongside a 181bhp electric motor; the transmission is by Honda's eCVT automatic gearbox. Although only available in five-seater guise (due to the electric motor's battery pack installation) the Hybrid also offers buyers a choice of driven wheels with both two- and four-wheel drive available.

Honda's self-charging petrol-electric hybrid is not a plug-in, which is good as that means no messing about connecting up charging leads every night after you've put the cat out. And not being pure-electric, there's none of that 'range anxiety' nonsense either.

So, is it complicated to drive? Actually it's a piece of cake; in fact you don't even have to waggle a gear lever around! Instead you just press a button on the centre console to select Drive, Park or Reverse (fingertip lift a pull-up switch). A Sport button serves up more 'oomph' and a more dynamic drive whenever it suits; other push-buttons set the drive mode to fully electric (EV; for an emission-free mile or so in clean-air urban zones) and the self-explanatory Econ mode. Simples!

On the move the CR-V's hybrid system can mix and match from three driving modes — performing in petrol, electric or hybrid modes. Its Intelligent Multi-Mode Drive 'brain' (AKA iMMD) determines the optimum active choice, automatically switching between them as and when necessary.

Sometimes the petrol engine will drive the wheels directly (during hard acceleration or during sustained higher-speed cruising), but for most of the time it powers a generator which tops up the battery pack as well as powering the main electric motor that for most of the time drives the wheels. When running in four-wheel drive power is sent to the rear wheels mechanically via a prop shaft (some other dual-power hybrids instead use a second rear-mounted electric motor to drive the back wheels). The CR-V set-up works just fine.

You'll find paddles behind the steering wheel only they're not for changing gear but for increasing the rate the CR-V slows when you lift off the accelerator — effectively it provides the equivalent of the engine braking you'd get when you downshift in a regular combustion-engined car with a manual gearbox. Regenerative braking is, of course, incorporated to convert braking energy to electricity to boost the battery pack — one of the main reasons electrified vehicles are so much more efficient driving in town traffic.

Right, so you're behind the wheel: thumb the Power button then either press the Drive button (or finger-lift the Reverse switch) and off you jolly well go. You'll barely hear the four-cylinder 2.0-litre petrol engine because at this point it's only being used as a generator to supply electric power to the 181bhp/232lb ft electric motor turning the wheels.

Whichever way the system mixes and matches the petrol and electric, you won't feel a thing — really! — and the CR-V's electric-fuelled progress is near-silent (helped by extra sound deadening and active noise cancellation), with seamless feel-good acceleration a core trait of the torquey electric motor plus there's Sport mode for more spirited driving or even just for enthusiastic bursts of overtaking.

The benchmark zero to 62mph is despatched in a brisk and linear 9.2 seconds but at any speed the CR-V's unruffled hybrid performance makes driving particularly relaxing. Top speed is a more than able 112mph and our overall test average of 51.9mpg is certainly impressive for a biggish 4.6-metre SUV like this, even beating the official Combined Cycle figure of 51.4mpg.

With it's a ruggedly raked looks and well-planted high-waisted stance the CR-V looks every inch the contemporary SUV, equally at home in the metropolitan bubble as roaming free on the range. With a good dose of tastefully done quality chrome highlighting to the grille, glasshouse, along the door sills, and adorning the tailgate, it's nicely eye-catching.

And it's good on the eye too when you swing open the driver's door. The upscale leather seats are shapely, nicely bolstered and supportively comfy and come with plenty of personal room in all directions around them; space-wise the CR-V trumps many of its rivals. Three-stage heated front seats with power lumbar can also be taken for granted as well as, for the driver, a heated steering wheel rim and power seat adjustment plus a two-setting memory recall. You sit high off the floor while still enjoying a fist of headroom and the driving position is commanding with a wide view over the bonnet and front wing-tops.

The dash is attractively laid-out with a classy-looking touchscreen display topped by hi-level air vents either side of a perfectly positioned hazard button. Below the screen is the dual-zone climate control panel (with, Yes!, traditional manual controls but press the Climate button and the settings can be viewed and adjusted on-screen). Under that, within easy reach of the driver, sits a lower console where, in non-hybrid versions, you'd find the gear lever. As mentioned earlier, in the Hybrid model this is houses the pushbuttons for fingertip selection of the various drive modes along with the electric parking brake (with auto hold) and Sport mode switches.

Honda enjoys a well-earned rep for top grade build quality and that's exactly what you get in the CR-V; fit and finish is spot-on, the trim materials all look good and the mix of finishing includes attractive honey-coloured wood veneers on the fascia, doors and central tunnel console, that are used effectively and which add to the cabin's feel-good vibe. The glasshouse is generous and combined with a powered panoramic tilt 'n' slide glass sunroof that lets the light flood in (a one-shot powered blackout sunblind is fitted for when you'd rather it didn't).

The seven-inch touchscreen is perfectly sized with crisp hi-res imagery and graphics and comes with a full infotainment and first-rate Garmin navigation system that's a breeze to use (idiot-proof destination input and sharp 3D mapping) as well as a reversing camera plus there's Android Auto and Apple CarPlay, Internet radio, Internet browsing and Aha app integration. A nine-speaker plus subwoofer audio system comes with a DAB radio and Bluetooth connectivity. There's also the must-have traffic sign recognition with the posted speed limit displayed alongside a digital road speed readout in the instrument panel.

Directly ahead of the driver is a digital instrument panel that's beautifully simple and easy to read night and day. A head-up display is icing on the cake and keeps you brilliantly informed as to your actual speed, the official limit, and where you should be going if you're being guided by the well-disciplined SatNav.

Between you and all this well-presented driver information is a good-to-grip three-spoke leather-wrapped wheel with multifunction controls — for voice, phone, trip and driving info, media, audio, safety assists, speed limiter, and cruise. Sensibly, they are all of different shapes and profiles to minimise distraction while your eyes are on the road, and they work perfectly.

In-cabin storage is well thought-out: most useful is the ingenious centre storage box that incorporates a padded sliding armrest between the front seats — it holds a huge amount of stuff and can be reconfigured in a jiffy to provide alternative storage solutions (it's also home to a HDMI and two USB ports plus a 12-volt power socket).

Other storage solutions include a big glovebox, long bottle-holding front door bins, deep dual-use siamesed cupholders and another open tray under the centre stack with a second 12-volt socket. Another neat touch — the drop-down glasses case incorporates a wide-angle mirror so you can keep an eye on rear-seat kids.

The CR-V gives you all the equipment and 'tech' you'll really ever need — we've mentioned a lot of it in the appropriate sections but in addition useful stuff such as keyless entry and locking with press button Start, rearview camera and front and rear parking sensors, heated and powerfolding door mirrors (on demand and automatically on locking and leaving), automatic dip/main switching, four one-shot windows, ambient cabin lighting, auto-dimming rearview mirror, and auto lights and wipes.

The back doors open to a full 90-degrees making everything from loading to entering and exiting super easy. The back cabin is lounge-like with plenty of stretch-room and space to spare for your head, legs, knees and feet, all made better by three-stage seat heating and backrests that adjust; even bulky six-footers will have plenty of personal space.

Fitting and removing child seats is a doddle thanks to the large door apertures. A wide padded centre armrest with built-in cupholders, dedicated rear cabin air vents, large pouches on the front seatbacks, bottle-holding door bins, excellent views out unspoilt by privacy glass and the large glass sunroof add to the pleasure of travelling 'in back'. Teens will appreciate the pair of USB charging sockets while a low centre floor tunnel makes life easier for any passenger in the middle when accommodating three side-by-side.

Don't be deceived by the flawless manner in which the power is delivered into thinking the CR-V is only designed to be smooth for the cruise — Honda's hybrid SUV is also more than chuckable, with a sporty edge to its handling and well-managed body control that keeps it on an even keel through corners and threading along twisty B-roads. The moment extra grip or traction (either on slippery surfaces or when cornering) up to 60% of the driving torque is diverted to the rear wheels. The result is safe and secure handling at all times with hefty vented discs on hand to guarantee braking is up to scratch.

If, given its high-riding (there's 200mm of ground clearance) and off-road-capable looks, you suppose the CR-V can't ride comfortably on blacktop, you'd be wrong. Very wrong. The Hybrid's ride quality even rolling on 18-inch alloys (very distinctive black with polished faces) wrapped in 235/60 profile Dunlop rubber is very good even on tacky tarmac (as good as its petrol-drinking stablemates) and, particularly on long trips, it makes the Hybrid a soothing cruiser. Adding to the restful ambiance is the impressively hushed cabin; both wind and road noise are well subdued, and the hybrid drivetrain works quietly in the background — often you don't hear it all.

Non-hybrid CR-Vs offer 561 litres in the boot whereas the Hybrid version musters a still pretty vast 497 litres when loaded to the window line. Where both versions score strongly is with their backseat-down loadbays — 1,064 litres; load to the roof and you can squeeze in 1,638 litres' worth of cargo!

The loadbay floor is seamless and flat with handsfree access via a powered tailgate that's quick to open and close (alternately you can use the smart key-fob or the fascia switch if that's more convenient). Loading is made even easier by a wide tailgate opening and you can personalise the opening height. In fact there's only one 'but' — but unless you're a hardcore caravanner it isn't a problem: whereas the 1.5-litre petrol-powered CR-V models will haul as much as 2,000kg braked, the hybrid is rated at 750kg.

Honda's CR-V is the world's best-selling SUV. Refined and satisfying to drive in town and out in the sticks, with a seamless hybrid powertrain, it's also impressively frugal — as in 50+mpg frugal. All-in-all, a likeably compelling reason to join the swelling ranks of the hybridistas. ~ MotorBar