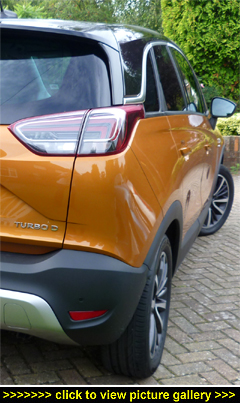 “Choosing a new crossover or SUV
has never been more complex —
but the good news is that that’s all
down to the mass of choice in a
booming market, with buyers going
crazy for compact crossovers...”

WITH THE HIGHLY-SUCCESSFUL 2/4WD Mokka X already in their 'X'-branded crossover stables, Vauxhall has recently added the Crossland X. Priced from Ł16K to Ł23K, it's 2WD-only and a rather more family-oriented compact SUV than the high-ridin' and ruggedly-chic Mokka X.

While the Mokka X and the Crossland X are both compact SUVs, the Crossland fills the space between MPV and SUV better for families, particularly those leading active lifestyles.

Powerplants are all-aluminium, state-of-the-art units: three-cylinder 1.2 petrols with 79, 108 and 128bhp; oil-burner fans get to choose between 97 and 118bhp four-cylinder 1.6 turbodiesels. Transmission-wise it's nice to see that both 'stick shifters' and two-pedal drivers are catered for.

We've just spent eight days and seven nights behind the wheel of the 1.6 Turbo D — Yes, despite all the hoo-ha in the media, motorists still like driving diesels. And this one is plenty pokey enough for family-sized transport. While the latest three-cylinder petrol engines are brilliant little motors and a genuine substitute for cubic inches, diesels still win hands-down in the torque stakes. And the turboed 1.6 has plenty...

The diesel's torque-fed 'oomph' is especially beneficial in urban traffic, where its 221lb ft of torque delivers lively and muscular thrust when accelerating from low-down, all made more pleasurable by a six-speed gearbox stacked with a set of ratios that optimise the power plus a clean and easy change action.

You'll also find the turbodiesel is kind to your wallet — over a week's hard driving we averaged 54.2mpg, helped, of course, by Vauxhall's ECOTEC stop-start fuel-saving technology. Few motorists will complain at that, especially as many won't be as heavy-footed as us and can aim to draw closer to the 70.6mpg official Combined Cycle figure.

The 118bhp turbodiesel feels perfectly at home on motorways, where it will cruise quietly and uncomplainingly all day long — but you'll have to hop across the Channel if you want to legally sample its 117mph top speed; its 10.6-second acceleration to 62mph can, of course, be tested in the UK anytime you wish.

Cutting right to the chase, the Crossland X is easy to drive. Around the houses it handles neatly — it's also soft-riding, which is cheering news especially for townies with their broken and potholed blacktop. Comfort profile 215/50 Bridgestone rubber also helps cushion any jolts. Out on the open road it remains an easy rider with light but positive steering, and cruising motorways at 70mph it feels assured and competent, its ride and pace relaxing. Whatever speed you are travelling at, you can always rely on its strong brakes (discs at each corner) to kill your speed.

Entry is though wide-opening doors and once seated you'll agree with the press blurb that mentions 'Tardis-like' inner space. In fact Vauxhall say that the 'X' doesn't refer to four-wheel drive but rather to the eXtra space over a hatchback or even an estate.

The deep glasshouse provides generous headroom even with the elevated seating positions, and it feels pleasantly airy inside. With a nose-to-tail length of 4.2-metres, and taller than a regular supermini-class hatchback, the well-packaged Crossland positively welcomes passengers to both its front and rear cabins.

The ergonomic sports-style front seats have been designed to maximise comfort — and they do, proving to be very supportive and comfortable over long distances. Plus sitting 'tall' not only keeps things interesting for the person riding shotgun, but also for the driver, with good all round vision and the spin-off of hassle-free urban manoeuvring and parking although rear parking distance sensors are on hand to take out the guesswork.

The seat bases are set the perfect height off the ground for effortlessly parking your body and swivelling in your legs; the driver enjoys a commanding driving position and extra comfort courtesy of a well padded Captain's inner armrest. The meaty leather-rimmed multifunction steering wheel with well-shaped thumb cut-outs is satisfying to grip, while the swan-neck pull-up handbrake with a release button conveniently on top works smoothly and calls for less brute force even if you've yanked it up hard when parking.

The seats themselves are smartly upholstered with patterned fabric centre panels that are as nice to sit on as they are to look at; and on both long journeys and quick trips to the nearest Sainsbugs, their faux-leather bolstering (which is firm enough but not too firm) makes them feel even better.

Also very effective are the large knurled knobs for adjusting the front seat backrests, and which make getting it right down to the very last degree a no-hassle manoeuvre when you need a tweak while driving. And few owners would begrudge spending a bit more for the labour-saving (!) keyless entry and start.

Expected features, such as a restful clutch-foot rest for when you're 'in the cruise', as well as big bottle-holding door bins, plenty of in-cabin storage and a USB for charging mobiles and the like, as well as those can't-live-without-'em cupholders, are all present and correct.

Also 'standard-fit', thanks to a well-fitted and interesting mix of trim and textures, gloss black, chrome and polished alloy highlights (including door sill covers), and a tactile dashtop fronted by a metallic-finish fascia insert, is plenty of cabin ambiance. All in all the Crossland's cockpit is an inviting and user-friendly place to spend time.

Notable driver-friendly touches include being able to adjust the dual-zone electronic climate control using either the traditional knobs in the centre stack or by fingertip on the large touchscreen.

Flicking through the trip information is something else done easily using a button on the indicator stalk; most important for drivers keen to observe the speed limits is the digital road speed readout with, just below it, the posted official speed limit.

Other key information shown includes navigation graphic prompts for the upcoming turn and countdown to it. The clear main dials are sited either side of the multi-mode trip display, with smaller gauges above for coolant and fuel.

Vauxhall OnStar assistance with SOS and concierge services is also part of the standard deal. Better still, drivers with OnStar will always be fully connected (and popular with their passengers!) thanks to the powerful 4G Wi-Fi Hotspot to which up to seven mobile devices can be connected.

OnStar additionally provides peace of mind with its 24-Hour Emergency Call, Roadside Support, and Automatic Crash Response services: in the event of an impact that deploys an airbag, an OnStar advisor is automatically alerted who can notify emergency services if needed. Pus OnStar's smartphone app lets you check vehicle status information or locate your car remotely via your phone. And should should some lowlife steal your car, OnStar will help you to track it down!

Should you decide to move up from the standard Comms package to the all-singing, all-dancing Navi 5.0 IntelliLink (Ł710) then you'll be more than happy with the crystal clear mapping and straightforward spoken directions it provides.

For the record, the Crossland comes with a top five-star Euro NCAP safety rating, underlining its position as one of the safest vehicles in its segment, and has been commended for the protection it offers both occupants and pedestrians.

Optional features give drivers additional support, should they require it, and include Forward Collision Alert with pedestrian detection and autonomous braking, Driver Drowsiness Detection, 180-degree rearview camera (for sight of other road users on either side when reversing), Head-Up display (speed and navigation), side blind spot alerts, and Advanced Park Assist (recognises suitable parking spots and automatically parks the vehicle when requested). In addition, the optional LED headlights deliver optimum night-time visibility without dazzling other drivers.

Rear passengers sit higher and benefit from backrest angles that favour relaxation. There's decent foot, knee and shoulder room, and headroom is as generous as it is the front. And, because the seats are set well off the floor, lower leg comfort is notably good, especially for long journeys. Snatching a power nap is easy in a Crossland!

A low central tunnel makes three travelling side-by-side a can-do, plus there are rigid door bins that will hold cans and small bottles, and deep magazine pouches. When not in use the headrests sit low, out of the driver's line of sight.

Boot space is also in keeping with its five-passenger-carrying capacity — at 410 litres it's very accommodating; but when the 60:40-split back seats are folded it challenges cars from the class above: whenever you need to do some heavy-duty cargo-carrying, dropping the rear seatbacks gives you a large loadbay that will swallow an impressive 1,255 litres.

The good points don't stop there either — Elite spec models also get a double-deck boot floor that, along with the high-opening tailgate, makes loading and unloading less like hard work, helped by the fact that there's no annoying raised load lip to lift heavy items over.

A genuine family car that's eye-catching on the outside and smart and roomy on the inside. Comfortable to ride in, reluctant to return less than 55mpg and, despite managing to occupy just over four metres of road space, very much suited to active lifestyles. As claimed, the 'X' in Crossland X really does stand for extra! ~ MotorBar