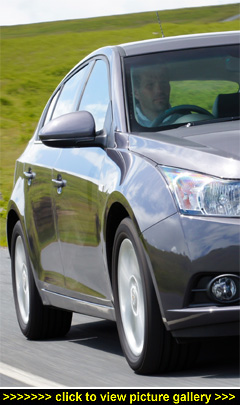 “Every seven seconds, someone
in the world buys a new Chevrolet!
Over one hundred years old and
with 209 million cars and trucks sold
to date, the iconic American car
brand appears to be ‘Cruzing’ along
nicely...”

First launched globally in 2009 as a four-door saloon, the Cruze has since accounted for one million sales world-wide. Saloons in this sector, at least in the UK, are not so popular so the new five-door Hatchback should enjoy even more success.

Launched this summer, the five-door Cruze Hatch sports the iconic, prominently rounded Chevrolet nose. With a hint of coupe styling, the front-end design runs smoothly down the sides to a relatively-conventional tailgate. Easy on the eye but, at a glance — other than the nose — it could be any one of many cars in this sector.

Backed by a five-year warranty, the Cruze Hatchback is currently available with a choice of three engines: two petrol and one diesel unit. Further variants will follow, including a smaller — likely 1.7-litre — capacity diesel.

Four trim levels are on offer. All, commendably, have Electronic Stability Control as standard, along with a host of safety features comparable to the five-star Euro NCAP-rated Cruze Saloon that won both the 2010 British Touring Car Drivers championship and both drivers' and manufacturers' titles in the World Touring Car series.

With the range kicking off at just Ł13,995, the entry-level LS model, fitted with a 122bhp 1.6-litre petrol engine, comes with a list of standard equipment that's as comprehensive as that to be found on other manufacturers' higher, mid-level models. Included in the price of LS models are AirCon, power front windows, follow-me-home headlights, electrically-adjustable heated door mirrors, a quality radio/CD player with auxiliary input and remote locking.

Cruze customers choosing the LTZ trim can specify a 139bhp 1.8-litre petrol engine with five-speed manual or automatic transmission, or the 161bhp 2.0 VCDi diesel unit with a choice of six-speed manual or six-speed auto 'boxes.

Top of the specs is the LTZ with Executive Pack. Available only as a 2.0-litre diesel, this costs Ł19,295 and, in addition to all the rest, gets you leather trim, SatNav and heated front seats.

My test Cruze was the likely best choice for retail buyers: the five-door, five-seat 1.8i LTZ with the 139bhp petrol engine and five-speed manual 'box. It costs Ł16,095 — a reasonable price for a mid-range family car. However, business users will most likely prefer the 2.0-litre diesel version which is better for fuel economy and also lower on tax.

The 1.8i LTZ's best features are its high level of equipment, attractive looks and roomy interior.

The rear seatbacks fold down, extending the loadbay from 413 to 883 litres although in its extended mode the loadbay floor is not flat, and heavy items have to be lifted over a high rear sill. And while it's certainly well equipped, some of the plastic trim is well below the level of its mainstream competition.

The petrol engine is no more than adequate: the top speed is 124mph and zero to 62mph takes an encouraging 9.8 seconds although in real-life it doesn't feel that swift.

With only a five-speed manual transmission (a Ł1,000 auto 'box is optional) the engine works hard — and makes itself heard — at motorway cruising speeds. This engine also lacks torque so it's not very responsive, calling for lots of gearchanges at low- to mid-range speeds.

The official fuel consumption is 42.8mpg. During my test drive covering long motorway journeys and the usual short runs in traffic, the 1.8i LTZ averaged 36.1mpg — not so bad; and acceptable for lower-mileage private users. Tailpipe emissions are 155g/km, which means a Ł165 annual road tax bill.

This Cruze rides comfortably but even so the soft-ish damper and spring settings don't allow the suspension to easily absorb potholes or cope with our rutted roads. It also means the Cruze wallows over undulating surfaces. And the softer set-up allows some body-roll during cornering — it's nowhere near as sharp, compliant or as confident as the latest generation Focus, Astra or Golf competitors. Although more versatile than the Saloon version, the Cruze Hatchback falls behind mainstream competitors for engine power, refinement and handling and lacks the polish of its main rivals.

In its favour, the Cruze numbers the iconic Chevrolet brand name, Touring Car Championship successes, racy front styling plus it's well equipped and comfortable. Its appeal will ultimately depend on what sort of deal customers can cut regarding price because price today is one of the driving factors in people's choice when choosing a run-of-the-mill family car. — David Miles