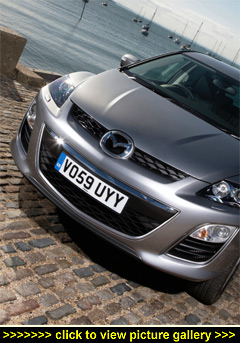 “With sales of SUVs officially
increasing, Mazda’s revised
CX-7 — powered by a new
turbodiesel — should be well
placed to cash in...”

FOLLOWING THE WORST WINTER conditions for thirty years and news that the glaciers are not melting and global warming might just be — as most people suspected all along — nothing more than political hot air, vehicle manufacturers and their dealers are reporting increased enquiries from both retail and business customers now looking to buy an SUV as their next vehicle.

And, right on cue, Mazda has brought out a new, diesel-powered version of their CX-7 SUV. Launched just over two years ago, the CX-7 was Mazda's first SUV 4x4 in the UK. It was a promising offering as it looked good, was well equipped and of family car size. The big problem was that it was only offered with a fuel-thirsty 2.3-litre turbocharged petrol engine — not good news in the mid-sized SUV sector where the vast majority of sales are for diesel models.

Now Mazda UK has ditched the petrol model and introduced instead an even better equipped 2.2-litre, 170bhp turbodiesel version. The specification is geared towards people who spend a lot of their working time and social lives in a car. The navigation, telephone communication systems, a Bose sound system, leather upholstery, heated front seats, plus the diesel engine and full-time all-wheel drive makes the ownership package much better.

The other essentials of big 19-inch wheels, privacy glass, electrically-operated windows/mirrors and air conditioning plus the usual comprehensive array of safety equipment complete an attractive package which costs Ł26,340 and is marketed in the UK as a single model called Sport Tech. However there's still a vital missing link — no automatic transmission option; another big selling point for SUV customers.

The latest CX-7 also gets upgraded safety technologies including a new Emergency Stop Signalling system which activates the hazard warning lights whenever the driver brakes abruptly and/or heavily and a new Rear Vehicle Monitoring system which aids safe lane-changing.

At 4,700mm in length, this five door, five seater mid-sized SUV competes against a wide range of competitors: the Land Rover Freelander, Honda CR-V, Audi Q5, BMW X1, Volvo XC60, Ford Kuga and the Toyota RAV4 as well as a host of two-wheel drive SUVs including the excellent Peugeot 3008 and the best-selling Nissan Qashqai.

On the styling front, the latest CX-7 has a revised and bolder version of the now-familiar Mazda family face with pronounced angulated styling lines for the front wheel arches which incorporate eye-catching headlight units. At the side is a rising waistline, and the roof lowers towards the rear to give a four-door coupe silhouette to the vehicle.

At the back there is a large steeply sloped tailgate; although it looks good this does limit the load space. With all five seats in use there's 455 litres of load space; fold down the 60:40 split rear seats and that increases to 774 litres — actually quite small in this class. The rear wheel arches are flared, which adds to the wide sporty stance of the vehicle that at first glance looks somewhat like a Lexus SUV — no bad thing.

The interior looks smart and is very well equipped but on closer inspection the appearance does not match the quality. The black interior trim for the dashboard and doors does not use the widely-used up-market soft-feel materials and is not quite up to the quality of its main competitors but the specification loved by company car drivers is all there.

Under the sleeker new skin, the latest CX-7 benefits from a stiffer bodyshell, re-tuned suspension, revised gear ratios and lower cabin noise. However, the suspension has been re-tuned for a sportier drive and now it's firmer and very hard, and the big 19-inch wheels and wide profile tyres give an uncomfortable ride that, over our poor road surfaces, can be unsettled. The Active Torque 4WD system delivers up to 50% of the drive to the rear wheels when required for maximum grip and agility is good and roadholding sure-footed. But the steering, though precise, lacks feedback.

The 2.2-litre, 170bhp turbodiesel engine puts out 295lb ft of torque and looks competitive on paper but in reality it is not as good as some of the Mazda's main competitors. The CX-7 is relatively high geared to try to achieve good fuel economy and lower CO2 emissions, but this high gearing detracts from its responsiveness at low- to mid-range speeds and consequently requires lots of gear-changing. The high ratio sixth gear is only for open road cruising.

Once warm the engine is quiet but from cold there is more 'diesel' rattle than other latest generation direct injection turbodiesel units. The CO2 emissions are relatively high as well: 199g/km means the CX-7 will cost Ł425 for the new first year VED tax (which starts in April 2010) before returning to Ł235 for subsequent years. The CO2-based BIK company car tax is consequently relatively high, at 30%. Officially, the CX-7 will return 37.7mpg and my test car did almost exactly that, at 37.2mpg.

The CX-7 is a bit of a mixed bag of good and bad points. It looks really smart, it's roomy for passengers, well equipped, has good on-road agility and is well priced. But the running costs will be high in taxes (high emissions in this class), the very firm ride is harsh and uncomfortable and there is no automatic transmission option. That said, it's an improvement over the first petrol-powered version. — David Miles