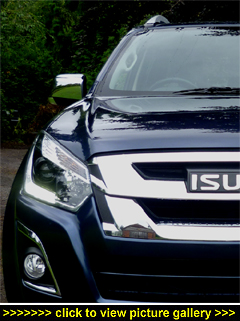 “Isuzu’s assertive all-road-tackling
D-Max pick-up has recently come in
for a serious makeover that includes
a cleaner all-new 1.9-litre engine...”

MORE OFTEN THAN NOT, when you see a pick-up today — in particular a four-door, five-seating double cab — it's often not a builder or jobbing gardener using it but a nuclear family with a pampered pooch. Even the two-door versions seem to be driven by noticeably more women.

And why not? Their tough, go-most-places abilities and urban jungle-proofing make them a logical choice for today's dangerous roads. Besides, go for the more upscale trims and a pick-up can be as well-specced as any crossover or SUV. And that includes the must-have four-wheel drive.

Not only that, PAYE workers who pay for their car out of their salary will keep a lot more of their hard-earned after-tax cash if their boss hands them the keys to a pick-up. And for some, that's reason enough...

The Utah sits above three D-Max models but below the Blade and leader-of-the-pack Arctic versions, but it's still kitted-out with plenty of equipment including black leather upholstery (with likeable woven-effect fabric centre panels), keyless entry and push button start, automatic AirCon, eight-speaker Pioneer navigation and infotainment system with a beautifully crisp multifunction touchscreen — the SD mapping is perfect and the whole thing intuitive to the degree that you can skive off reading the handbook.

Previously the D-Max employed a four-cylinder 2.5-litre turbodiesel that kicked out 160bhp backed-up by a muscular 295lb ft of torque and would haul a 3,500kg braked trailer; but the new turbodiesel now occupying the engine bay has dropped 601 cubic centimetres. A good move?

Absolutely. The downsize is actually a sensible swap: with 161bhp and 265lb ft, it's cleaner and more economical — emissions, now compliant with Euro 6 standards, have been reduced to 205g/km while at the same time fuel consumption has been bettered with an official 36.2mpg in the Combined Cycle (for non-EU English, read that as 'average') . And the 1.9 will pull the same braked 3.5 tonnes.

Step up into the D-Max — despite riding tall you probably won't need the non-slip side-step although there are sturdy grab-handles on the A-pillars — and settle in the well-padded and supportive leather seat from where you'll enjoy excellent 360-degree visibility and a commanding driving position.

Unlike most modern cars, from behind the D-Max's wheel you can actually see the bonnet and both front 'corners' (and, courtesy of a deep, full-width rear screen, you can see the rear 'corners' too). Consequently, placing the Utah — even when jockeying in heavy traffic — really is a walk in the park.

Deep side windows let plenty of light in to what is a spacious cabin with generous headroom. The dash and centre stack are neatly laid out and there's plenty of 'in-flight' storage for all aboard — including two gloveboxes (one lockable), a good-sized lidded bin in the top of the dash with another under the front armrest pad, and door pockets that genuinely do hold bottles, etc. Particularly neat are the mini-drawers built into each end of the fascia that double as cupholders and which are perfectly sited for those essential kick-start-your-day Americanos.

In terms of power this civilised 1.9 is as well endowed as the 2.5-litre it replaces: in fact, power is up — albeit by a token 1bhp, to 161bhp. Importantly, the new engine generates a strongly satisfying 265lb ft of torque — enough for it to pull the same 3,500kg it's predecessor did with 30lb ft more. You'll also find the new six-speed automatic gearbox is nicely in-tune with the demands of your right foot — thanks to shorter ratios it ensures that the performance is the same, or better, than that of the superseded 2.5-litre. And it feels it.

Two things: there's still more than ample reserves of torque for heavy-duty towing and load-lugging; and the new unit's diesel soundtrack is noticeably more muted. On the move there's also a sharper response when you squish the loud pedal and a feeling that 'there's plenty more where that came from'. It's also agreeably hushed when cruising at the legal limit.

For those occasions when more focused driver input is needed, such as towing or driving off-road, the selector lever can be nudged sideways into its +/- gate for smoothly managed up- and down-shifts dictated by you.

Given that the D-Max wears a big, tough body and majors on genuine workhorse ability (which includes all-wheel drive), fuel consumption is better that you might have expected — our 'drive 'em hard' test philosophy means few drivers are likely to see a lower fuel consumption that us; and over 400 miles of mixed roads we recorded 33.9mpg against the official Combined Cycle 36.2mpg — close enough to confirm that you too should achieve figures like these.

Few would object to being seated in the rear section of a D-Max's double cab. For a start it's an easy climb in and the seats are set high off the floor, so along with decent knee and leg room, rear passengers can enjoy people-watching as the world passes by.

Like the front, the back compartment is also pleasantly airy with plenty of light coming through the full-width rear screen. A well-padded, drop-down central armrest will cheerfully separate two 'bruisers' and, with long nicely-padded outer armrests, cupholders, and dedicated heating ducts, your back seat passengers will stay comfy and cosy.

If it must be three-in-the-back, well that's doable too — the central tunnel is minimal and three pairs of shoes travelling side-by-side won't cause any disagreements. And Yes, there are twin Isofix child seat mountings as well as rear door child locks.

For those times back passengers don't figure, numerous cargo-carrying options kick into play — for instance, the rear backrests drops down totally flat onto their seat bases to make a useful 'bay' behind the front seats; alternatively you can fold and lock vertically either — or both — of the 60:40-split base cushions to accommodate taller items. And then there's the obvious: if you're realistic about leather's practicality, leave the seats in place and just dump your shopping on top!

These latest generation D-Max pick-ups also come with a satisfactory ride quality — even crumbling blacktop and poorly patched potholes are barely noticed. And there's none of the 'bouncy castle' handling you'll find on some pickups when running lightly laden.

Despite its size (5.3 metres long, 1.8 metres tall, and with a bonnet that sits closer to most people's chest than their waistline!) the D-Max doesn't feel the tiniest bit oversized — that's down to it being manoeuvrable and easy to place, both in car parks and out on the road; handling is predictable, it's composed through the twisties, and feels stable and secure when mixing it with fast-moving motorway traffic.

The D-Max serves up a laid-back drive, being agreeably chillaxing to travel in, particularly on long runs and in stressful rush-hour traffic where it makes its driver feel cool and fully in control, all of which helps explain its strong appeal to lifestyle users.

Good to know, too, that the D-Max is competent in severe weather conditions as well as off-road; a low-range gearbox and 4x4 drivetrain lets you flick from two- to four-wheel drive 'on the fly' at up to 60mph using the rotary knob close to the selector lever.

In the rough the D-Max's 235mm of ground clearance helps considerably, as does a 600mm wading ability and approach and departure angles designed for climbing over obstacles.

Pickups have a loadbed behind their cab that doubles as an exceptionally big boot. Our test Utah came with a strong lockable black roll-top 'boot lid' that slides open automatically and makes the lined loadbed a secure and weatherproof place to stow your gear. When opened, the drop-down tailgate sits horizontal and level with your thigh for no-hassle loading of large items. And Isuzu even throw in a full size matching alloy spare wheel — something for which a number of carmakers now charge extra.

A versatile lifestyle vehicle, the tough-but-tame D-Max is not only family-friendly and nice and easy to drive but for added peace of mind it comes with a rival-beating best-in-class 5-year/125,000-mile warranty. ~ MotorBar