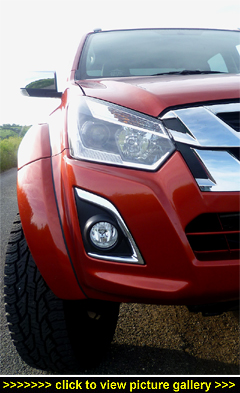 “It might look like it’s a hardcore
monster truck escaped from a Mad
Max movie but Isuzu’s D-Max AT35
pick-up is surprisingly civilised
surfing the blacktop...”

THE LOOK COMES courtesy of extreme pick-up makeover artists Arctic Trucks whose speciality is building invincible trucks that can go up against the toughest terrain — and win.

While this green and pleasant land might not offer much in the way of terrible terrain apart from a handful of horrid hills, of late it's been doing some worryingly wet and windy weather. No problem for the AT35: it rolls on monster tyres — 35-inch rubber wrapped around 17-inch black alloy wheels — that help boost the standard D-Max's ground clearance to 290mm. And it doesn't just dip its toe in the water — it jumps right in and wades through 700mm of the wet stuff.

Pick-ups appeal! No question about that with now even staid Mercedes-Benz tapping into the trend with its luxury-feel X-Class. But even that can't even come close to trumping the visceral charisma of this flagship Isuzu D-Max. If you want to get noticed, really noticed that is, forget twenty million Facebook followers — drive an AT35 instead. But be prepared for people to point and stare and wave, request selfies and video you and your beastie to boost their own social media ratings.

Based on the double cab D-Max Utah, itself recently updated and running a new 1.9-litre engine, the AT35's most dramatic feature has to be the monstrous rubber doughnuts it rides around on. The wheels are enormously wide and substantially flared wheelarch extensions were needed to cover them.

Don't for a second think the AT35 is all-show-and-no-go because for nearly thirty years Iceland-based Arctic Trucks has been re-engineering four-wheel drive vehicles to allow them to be used in the most hostile conditions in the world's most remote environments.

Which means that the AT35 can, and does, deliver in the worst outdoor scenarios. Making sure it can clamber over just about anything you point its full-on chrome radiator grille at is a suspension 'man-up' that has seen the D-Max's already capable standard set-up seriously upgraded with a Fox Performance Series Suspension system specifically designed for off-roading that offers greater travel to accommodate the huge Nokian Rotiiva all-terrain tyres.

Drivers who regularly venture far off-road will appreciate the value of the AT35's extended suspension travel and boulder-hopping ground clearance and the approach and departure angles: a 44 degree approach angle; 32 degree ramp-over; and 24 degree departure angle; an a 49-degree tilt angle. Together they mean the AT35 will go just about anywhere… well, anywhere you've got the nerve to take it.

From the truly commanding driver's seat you enjoy excellent visibility with clear views of all four corners and the bonnet so placing it, on road or off, is a doddle — despite it measuring 2,170mm (just half an inch under 7 foot 2 inches) wing-mirror-tip to wing-mirror-tip. And mountain goat-like levels of off-road aside, this extreme pick-up can be slung about surprisingly enthusiastically. Not only that but it feels stable and stops with reassurance (there are discs all round, vented at the front).

With a length of 5.3 metres the average superstore parking bay can be a tight fit and will require some extra manoeuvring — not a problem because you can see exactly what you're doing, plus there's also a reversing camera and sensors on your team.

Getting aboard is not as daunting as you might expect when standing alongside — the extended running boards and well-sited grab handles on the windscreen pillars make it easy even for your Grandma. Once inside, first impressions are good; a clean-cut cockpit with smart, well padded and comfortably-bolstered large leather-upholstered seats sporting white embroidered 'Arctic Trucks' logos on their headrests (you'll also find them repeated on the aluminium door sill scuff-plates and tailored floor mats).

There's plenty of space, including generous headroom, even for broad-shouldered XL-sized adults and the dash is agreeably uncluttered — almost minimalistic — with a clear instrument panel (speedo and rev-counter either side of a multi-information display) all perfectly visible through the meaty steering-wheel; the neatly-integrated centre stack is home to a good-sized touchscreen and, just below it, a foolproof circular climate control hub with various function buttons arranged around it like the hours on a clock and, at its centre, a large rotary knob to control the temperature — using it on the move is far less distracting that any of the touchscreen-only controls that have now become the norm.

Many drivers still prefer proper stand-alone traditional knobs and buttons to control the heating and ventilation — in the D-Max that's just what they'll get; the handbrake, too, is trad-style; a pull-up item close to the driver's left thigh. Drivers will also appreciate the powered seat adjustment and the wheel-mounted remote controls.

The driving position is spot-on — as commanding as you would want and made doubly better by the excellent visibility forwards, to the sides and rearwards thanks to big windows, a full-width upright rear screen, four see-able corners, a bonnet you can see from behind the wheel, and large door mirrors.

In-cabin storage is family-friendly too with a big bin under the large armrest separating the front seats, cupholders, bottle-holding front door bins, drop-down sunglasses case, a neat tray below the steering column, a coin box in the offside fascia, a useful box with flip-up lid built in top dead centre of the dash, two decent-sized gloveboxes and, a clever use this of otherwise dead space, a pair of nifty pull-out small drawers, one at each end of the fascia, with slide-out 'lids' that convert them into individual cupholders that come in handy for all sorts of things.

Surprisingly, thanks to their big fat sidewalls, the 315/70 AT Tyres actually add some tangible cushioning to the D-Max's ride. And while the all-terrain tyres may look a tad knobbly, they don't generate any harshness when rolling over blacktop.

For better efficiency these latest-gen D-Max models are powered by a 1.9-litre turbodiesel (prior to downsizing it was a 2.5) and can be partnered with a manual or six-speed autobox. Thumb the starter button and you'll hear the reassuring sound of an oil-burner but on the go you really aren't aware of its aural signature.

With 161bhp and backed-up by 265lb ft of torque (at 2,000rpm) it's more than up to the job of moving the two-tonne-plus AT35 around. Top speed is 112mph and the 0-62mph time, while not officially stated, is perfectly good enough — you certainly won't have any problems keeping up with traffic.

The autobox comes with a manual override mode for 'stick' shifting when it's advantageous. Also good to have is the ability to shift on the fly between 2H, 4H and 4L (Low Range) via the straightforward rotary knob down by the selector lever.

Officially the Combined Cycle fuel consumption figure is 36.3mpg and a week's hard testing resulted in a showing of a perfectly liveable 30.8mpg (and perfectly acceptable for a behemoth such as this).

Climb up into the 'double' part of the cab and you'll feel immediately at home. The seats are well padded and there's plenty of glass all around, especially the full-width upright rear screen. At floor level there's room for three pairs of booted feet; moving up to the knees, the space is still good; go right to the very top and there's a fist of headroom.

There's also plenty of personal space for two adults sat either side of the well padded central armrest; sitting higher than those up front, they'll enjoy fine views out and will be sure to enjoy travelling in the back.

Practical touches include Isofix child seat fittings on the two outer rear seats and rear child door locks, door pockets with bottle-holders, generous pouches on the front seatbacks, plus pop-out cupholders. Practicality is significantly boosted by the 60:40-split folding rear seats: for extra load-carrying you can fold individual backrests down (to provide a fairly long and level load area) or you can flip up the base cushions to create a taller bay still with a perfectly flat floor. Either way, it's a handy and versatile feature.

Switching to a pick-up means giving up a boot in exchange for an open cargo deck behind the cabin unit. The good points are great flexibility, and no restrictive roof-limiting load heights (within reason!). The 1,530mm-wide and 465mm deep cargo bed comes with a heavy-duty liner already fitted. The drop down tailgate is damped so no pain when dropping it for loading and, despite its sturdiness, it's easy to lift and lock. In addition to slim roof bars the AT35 will also tow for England — a braked 3,500kg.

Alongside humongous road presence and Armageddon-surviving off-road abilities, the AT35 delivers credible and comfortable everyday transport for five within its double cab body. Why spend a fortune to fly into boring old space with Virgin when for a fraction of the cost you can physically explore most anyplace on the Blue Planet. ~ MotorBar