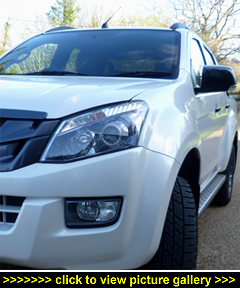 “There’s something abut a pick-up
that’s fundamentally appealing —
a can-do-ness that not even the
biggest 4x4 can trump. And in
four-door, five-seat double-cab
configuration plenty of people prefer
them to an ‘urbanised’ SUV...”

PROOF OF THE EVER-GROWING APPEAL of pick-ups is that even Mercedes-Benz is coming to the party (with its forthcoming X-Class) while plenty more big names have also RSVP-ed. Never, in the history of pick-ups, have buyers had so much choice.

For lifestylistas, Isuzu's D-Max premium range pick-ups are the ones to go for unless it's a single-cab or a four-seating, four-door extended-cab workhorse you're after, in which case the Japanese brand's 'utility' line-up will serve you well. If you want all the bells and whistles and four-wheel drive then the plusher Eiger, Yukon, Utah and Blade versions will serve you right.

The D-Max certainly looks the leisure-oriented pick-up. The lines are clean and uncluttered and all the more standout because it's totally bling-free; the eighteen-inch six-spoke alloys, wrapped in meaty 255/60 18-inch Pirelli Scorpion Zero rubber are smart without being showy and hooded by big but shapely wheelarches primarily designed to allow for plenty of wheel travel off-road.

While there are five trim levels to choose from, picking an engine is as straightforward as it gets because there's just the one — a 160bhp 2.5-litre twin-turboed diesel. That's not a problem because its accompanying 295lb ft is more than capable: the D-Max will happily haul a 3,500kg braked trailer, and makes light of carrying 1,075kg in the loadbay.

Swing yourself in behind the multifunction steering wheel and you'll immediately 'get' why people like pick-ups so much — the driving position is commanding and the generously glazed double-cab affords excellent 360-degree visibility, made even better because you can see the bonnet and the front 'corner's (though the full-width, full-depth rear screen you can even see the rear 'corners' too). Consequently, placing the Blade accurately on the road — even in 'crush' hour traffic — is a piece of cake.

Which is good, because the D-Max is no socially-stunted 'compact'. From nose to tail it takes up 5.3 metres of blacktop; it's 1,860mm wide, has 225mm of ground clearance and measures 1,785mm to the top of its roof. Unexpectedly, from the driver's seat it doesn't feel bulky; it's other drivers, even those in large SUVs, who're clearly very much aware of the Blade's physical claim to road-share.

The benefits are twofold: inside the double-cab; and in the loadbed behind it. First the cab. You not only ride 'tall in the saddle' in a D-Max but you can also wear a tall hat while driving: the deep side windows go hand-in-hand with generous headroom and climbing aboard is super easy thanks to sturdy grab-handles on the A-pillar.

The cabin is spacious and there's ample high-gloss piano black trim to the centre stack and door cappings plus a similar fascia 'skin' to what you'll find in some Volkswagens to make you feel at home. In addition there's leather upholstery covering the large and accommodating heated seats, with grippy black mesh bolstering that helps keep you located when the going gets tough in the rough, and which 'do' long distances comfortably.

The driving position is spot-on and the dash clearly laid-out for hassle-free use with automatic climate control and a fully-loaded eight-speaker Pioneer navigation system incorporating a 7-inch touchscreen and a reversing camera. The dials are large and clear and the wheel rim of a good-to-hold girth.

Appreciated touches include the pullout mini drawers that double as cupholders fitted each side of the dash and which are perfectly sited for those essential takeout cappuccinos, two gloveboxes (one lockable), a handy lidded bin sunk into the the top of the fascia, bottle-holding door bins that really do hold real-world bottles, and on-demand powerfolding and heated door mirrors.

If you're asked to sit in the back you'll be well rewarded physically — getting in/out is easy and once you're in there's a decent amount of knee- and legroom and, courtesy of the low central floor tunnel, generous foot-room (three pairs of shoes side-by-side is doable). Better still, you sit high off the floor so lower leg comfort is good.

Views out at not harmed by the tinted rear glass and the rear cabin is pleasantly airy, helped by the light coming through the expansive rear screen. Keeping it all civilised are long outer armrests and a well padded, drop-down central armrest that's big enough for two to share with no boundary disputes. And while you don't get heated seats in the back, there are effective dedicated heating ducts for the colder months.

If you're not carrying passengers in the rear cab you have plenty of options for cargo — one is to fold down the rear backrest (it drops down totally flat onto the seat bases) to free up some useful load space behind the front seats. Alternately you can fold up either or both of the 60:40-split seat base cushions which can then be secured upright. Of course, there's nothing to stop you just slinging stuff on the rear seats left in their normal setting!

Under the D-Max's clean-cut bonnet sits a twin-turboed 2.5-litre diesel engine that pumps out 160bhp and 295lb ft. Work it and you'll hear a reassuring growly note — this is, after all, a bit of a beastie!

A five-speed autobox keeps the engine on song, matching the demands of your right foot. But ease off the loud pedal and the turbodiesel soundtrack fades to a reassuring background burble.

Adding to the driving appeal is the fact that, when helpful (towing, off-roading, etc), the selector lever can be nudged sideways into its +/- gate and gear changes managed manually.

If you're thinking that a big tough body and workhorse abilities combined with four-wheel drive and an autobox means you'll pay at the pumps, you'll be pleasantly surprised to discover that you won't — driven fairly hard over 350 miles, from twisty country lanes to longer motorway trips, the 2.5-litre Blade returned 32.2mpg against the official 33.6mpg — not only close enough to be honest, but indicating that even better economy is achievable with a more laid-back driving style.

Another pleasant surprise was the decent ride quality — our passengers all commented on how well the D-Max rode, with even large potholes taken in it stride; sure there's an occasional 'thud' but no jarring or crashiness. Better still, the ride is not bouncy nor the tail skittish, as some pick-ups are apt to be particularly when running unladen. In fact the D-Max feels agreeably good to travel in whether you're tasked with taking the helm or you're just along for the ride.

Dynamically the Blade's satisfying to drive because it handles predictably; you feel safe even at fast motorway speeds, when it just lopes tirelessly along. Overall there's a palpable no-nonsense can-do attitude that's boosted by how easy it is to place on the road even in the cut-and-thrust of city traffic.

And even though it's 'just' a pick-up, safety kit is comprehensive with ABS brakes, Electronic Stability Control, Traction Control, dual front, side and curtain airbags, and height-adjustable front seatbelts all being standard-fit items.

It's also got everything you'll need for roaming about in the rough, starting with a 4x4 drivetrain and low-range gearbox and plenty of ground clearance; all helped by a 600mm wading ability, 30-degree approach angle, 22-degree departure angle, 22-degree ramp angle, and 49-degree tilt angle. Incidentally, the Blade's useful side-steps don't reduce its off-road ground clearance or impede off-road ability.

The low-ratio four-wheel drive setting (4H) needs to be selected when the D-Max is stationary but shifting from 2H to 4H (for gravel, sand, snow) and back again can be done easily 'on the fly' at up to 60mph using the rotary selector switch just aft of the autobox's selector lever.

The tailgate is damped for controlled (and pain-free) opening — a nice touch as it's very sturdily built. When opened it sits horizontally level with your thigh so loading will go easy on your back.

Keeping your gear safe is a strong black roller blind loadbed cover that slides back automatically when unlocked (a resilient return strap makes pulling it shut again easy). Also worth mentioning is that the Blade's double cab is fitted with roof bars that offer another carrying option. And should you ever need it, you'll find a proper spare wheel mounted externally under the loadbed.

One of the most un-truck-like lifestyle vehicles, under the skin the D-Max is workhorse-tough and totally dependable and trumps its rivals with a 5-year/125,000-mile warranty. It's also enjoyable to drive — a Big Friendly Giant of a pick-up! ~ MotorBar