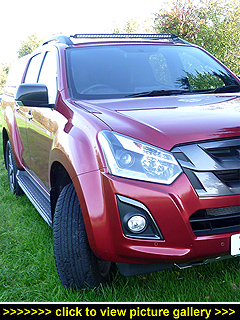 “Yee-Haa! If you’ve never driven a
pick-up you’ll likely think it’s all very
cowboy-ish. But it’s far more than
just a Bucket List entry — riding
around in a double cab could bring
out the secret Die Hard in you...”

PICK-UPS ARE POPULAR, you can't argue with that. And the choice keeps on expanding with the likes of even Mercedes diving in; no doubt there's gold in them thar pick-ups… But while there are plenty of fancy new kids on the block, it makes sense to check out the 'old timers' with years of expertise under their belts.

One such is Isuzu's well-known and long-time favourite, the D-Max double cab. Prices run from Ł18K to Ł30K (the XTR and awesome AT35 specials take that even higher, to, respectively Ł35K and Ł41K). But unless you're planning on personally visiting Santa at his North Pole grotto, any of the standard D-Max line-up's models will serve you perfectly well.

The D-Max Blade looks the biz, too. Imposingly rugged and clearly eager to lock horns with some apocalyptic terrain, its bonnet (that's nearer to your chest height than your waist) fronts a thrusting nose treatment while down the flanks blistered wheelarches not only look good but underscore its ability to go where the wild things are (you won't get far crossing rough terrain without plenty of wheel articulation). 255-width rubber with plump '60' profile sidewalls are wrapped around metallic dark grey, multi-spoke, eighteen-inch alloys and the paintwork is as shiny as on any flash sportscar — the difference is you can muddy a D-Max to the roof rails and it somehow looks even better!

While 'pick-up' implies utilitarian with a large 'U', that's definitely not the case when you pull open the Blade's door. Step up — you may be glad of the non-slip side step and sturdy grab-handle on the A-pillar — and sink into a well-shaped chair. Once inside the spacious and airy cabin you'll find plenty of leather, high-gloss black finishing and enough lifestyle features to make you think SUV rather than workhorse.

The dash and centre stack layout is delightfully straightforward and everything is where you'd expect to find it with big buttons and switchgear and no crowding, and all operated easily on the move. The trad-style foolproof white-on-black dials — and the driver's trip display between them — tell you everything you need to know in a glance.

What you do get is plenty is comfort — the large seats are well padded and will keep you relaxed all day long. There's very generous headroom even though you sit tall. The benefit for the driver is the excellent side and forward visibility out over the sizeable bonnet; from behind the D-Max's wheel you can see both front 'corners' which makes placing the Blade a no-brainer in rush-hour traffic or deep in the forest.

It's good, too, to have plenty of in-cabin storage. Along with not one but two gloveboxes (one lockable) comes a lidded bin in the top of the fascia, a large storage box capped by the wide central front armrest pad, door pockets that honestly do hold bottles, and a drop-down case for your shades. Particularly useful are the 'mini-drawers' at each end of the dash: they slide in/out and can be used either as handy oddments boxes or as cupholders for your Starbucks take-outs.

The glasshouse's large windows let plenty of natural light into both the front and rear cabins and the full-width rear screen can be slid open, which on models that come without the estate-style hardtop over the load deck is a real bonus on sweltering hot days. Spot the dog loved it too! A drop-down central armrest comfortably defines personal borders for two Bond-movie 'heavies' aided by long, nicely-padded outer armrests. Flip-out cupholders are provided should you need them.

In fact, travelling in the back of the double cab is unexpectedly enjoyable as there's plenty of room for legs, knees and feet and the seats are set high off the floor, so passengers can enjoy some high-level people-watching. Three in the back? That's doable too, and made easier due to the minimal floor tunnel. And yes, the rear door bins hold bottles and seatback pouches, Isofix child seat mountings and rear door child locks are all present and correct.

Given it's high-riding looks you might be in for a surprise when you ride along in a D-Max for the first time because it's pretty laid-back to drive in around the houses and on long runs — its 5.3-metre long and 1.87-metre tall body wraps itself around you protectively and makes driver and passengers feel safely above the fray. Despite it's XXL footprint it actually doesn't feel the least bit oversized.

Sure you'll hear the odd thump from the tail when driving over larger speed humps or major potholes but generally even badly patched blacktop barely registers. Better still, there's none of that 'bouncy castle' effect you can experience with some pick-ups when running with just a driver and front passenger.

Of course there's a 'workmanlike' veneer to its on-road driving character but then few other vehicles can also be as brutally effective off-road. For all sane drivers the D-Max's roadholding is reassuring and predictable; it feels well-planted through the twisties and secure and stable on fast motorways. Job done!

Despite government pledges to eliminate all fossil fuel-powered vehicles from the roads, the reality is that even if you can't buy a new one after 2030 it will be years before the last of the diesel tribe finally goes to the great scrapheap in the sky. More importantly for the here-and-now is that the Blade (and all D-Max models) runs a gutsy turbodiesel — if you want lugging power you need torque, and diesel delivers that in spades.

A 1.9-litre in the engine bay pumps out 161bhp and, more importantly, 265lb ft of torque — which is how it's able to pull a massive braked 3,500kg (more than most of its greenhorn rivals) plus over a one tonne (1,086kg) payload. It feels suitably bullish low-down and gets off the line willingly. The autobox is a six-speeder and thanks to a well-stacked set of ratios is well matched to the powerplant's torque band. And for those times when you might need to personally control the shifting — when towing or off-road — you can flick the selector lever into its manual +/- gate and change gear exactly as and when you want to.

Despite its commercial-grade grunt the soundtrack is fairly muted and is effectively in the background most of the time and when loping along at the legal limit (it will run to 112mph). While those planning to use its formidable towing and off-road capabilities to the full will not be losing any sleep over the fuel consumption, it's no gas-guzzler. Officially the combined figure is an agreeable 36.2mpg, which isn't at all bad. We drive 'em hard so that everyday buyers will know what to expect in real-life — a week driving the Blade in all conditions and on mixed roads saw us record an average of 33.7mpg.

Off-road it feels as well suited to the raw terrain as a Dakar Rally challenger, blitzing its way over the rough stuff with determination. The heart of the D-Max's off-roadness is a 4WD system that offers both a high and low-range set of ratios — the latter the better to tackle the truly tricky bits. On-road you can quickly flick from two- to four-wheel drive 'on the fly' at up to 60mph using the rotary knob close to the selector lever. Which is equally reassuring when severe weather conditions blanket the country during the winter months. Far from the tarmac, the D-Max's hill descent control, 235mm of ground clearance and its 600mm wading ability all help keep it moving, as too does its approach, breakover and departure angles which are designed for getting over obstacles without leaving any bodywork behind!

Your boot is the loadbed behind the cab. D-Max models usually come specced with a sturdy, roll-top 'bootlid' that slides open; closed and locked it turns the lined bed into a secure, weatherproof and exceptionally big boot to stow your gear. Or, like our test Blade, it can be fitted with a proper hardtop 'canopy' that turns it into a commodious estate with side-opening rear glazing and a proper heated rear screen.

This arrangement gives you a split tailgate: the lower section is the D-Max's sturdy and helpfully damped heavy-duty tailboard that you'll need to drop when loading cargo — it sits perfectly horizontal and level with your mid-thigh for no-hassle loading into the toughly lined and very large 'boot'; the upper section is a full-width opening glass rear screen that lifts up high for quicker access. Roof bars provide more load-carrying options.

Sometimes, if you're not carrying rear passengers, you might just find it more convenient to utilise the space behind the front seats. In which case you can either drop the one-piece backrest to form a useful flat-based load area or fold up either (or both) of the 60:40-split rear seat bases, which can be locked upright against their backrests, to provide taller single or double-width load areas. Another handy option when carrying longer items in the loadbed is to open the rear screen's sliding centre section for some extra length.

The D-Max comes with a 5-year/125,000-mile warranty — that's better than many ordinary cars that won't have anywhere near as hazardous and hard a life — that underscores just how well built this pick-up actually is. Good to know particularly when you're far from help 'off-piste'. With the D-Max what you see is what you get: an urban-jungle-proofed, all-terrain-tackling, versatile lifestyle machine that feels a safe haven on today's hazardous roads. Best of all, it's an easy rider. Yee-Haa! ~ MotorBar