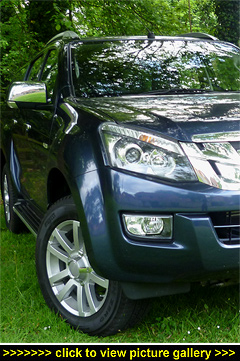 “If you’re after a rugged pick-up
that’s not worried about getting down
in the dirt then Isuzu’s D-Max should
be on your list — not only is it tough
and well-endowed with off-road
ability but it’s backed by a five-year,
125,000-mile warranty...”

DESIGNED TO WITHSTAND THE WORST you and a hard life can throw at it, the D-Max has the toughness to be the 'last man standing'. In these days of throw-way consumerism it's satisfying to have something that you can really use to the max and keep for years — something that's always there for you come what may.

A handsome behemoth with muscular flared wheel arches and a bold nose fronted by a big chrome grille and daytime running lights and plenty of gleaming chrome embellishments, the D-Max looks purposeful with a capital 'P'.

The D-Max is powered by a torque-rich (295lb ft @ 1,400rpm) 160bhp four-cylinder 2.5-litre common-rail turbodiesel engine made by a company who know a thing or two about diesel engines (Isuzu is not only Japan's best-selling medium-truck manufacturer but also the biggest diesel engine producer in the world, having produced more than 22 million of them).

Around town the turbodiesel is snappy enough to exploit gaps in the traffic while on motorways it's as happy as Larry breezing along at the legal limit.

The 'on demand' all-wheel drive is managed by a foolproof rotary dial aft of the auto selector. On-the-fly shifting from two-wheel rear drive to four-wheel can be done at speeds below 60mph. To engage the low-ratio four-wheel drive you need to stop before you select.

Incidentally, a Winter mode on the autobox permits second gear pull-aways. Sequential manual shifting using the selector lever is also on hand — just flick the lever across to the left and gear changes are then up to you. Left to itself the five-speed autobox delivers smooth shifting.

More good news — even with an automatic transmission partnering the turbodiesel it manages an official 33.6mpg in the combined cycle (City 28; Touring 38.7). In real life it comes very close, averaging 31.9mpg over 500+ miles of real-world driving. So if you're in the market for a four-door, five-seater pick-up that will handle both recreational and family duties then the double cab D-Max offers a hill of space and versatility.

For starters the 4x4 will tow 3,500kg braked (750kg unbraked) and can carry a 1,058kg payload. It will also go most places you point its nose thanks to its 235mm ground clearance; off-road its approach, departure and ramp angles of 30, 23 and 22 degrees respectively along with a maximum transversing angle of 49 degrees confirm the D-Max's all-terrain abilities.

Outside it's a pick-up; inside it's very car-like with plenty of passenger space. As you might well expect given its long and wide footprint — 5.3 metres nose to tail.

Entry (and exit) through the long, wide-opening front doors is easy — there are non-slip side steps just in case as well as grabs over the door frame as well as on the screen pillars.

Once aboard you'll find yourself sitting comfortably in large, leather-upholstered seats — after 500 miles we didn't have a single ache or twinge between us!

There's a fist of headroom and although the steering wheel only adjusts for height that's not a problem as the powered driver's seat more than compensates. Height-adjustable seatbelts are appreciated, as is the big-booted foot room.

There's no denying that this Isuzu is a big beastie but the commanding driving position and good all-round visibility makes it easy to place on the road and, thanks to a tight turning circle, car parks hold no fears for D-Max drivers.

Switchgear and instrumentation is all where you'd expect it: the speedometer and rev-counter sit either side of a trip display that also shows fuel and temperature as well as the currently selected gear; an all-in-one rotary dial controls the efficient AirCon; the SatNav is easy-peasy with clear directions and the maps on the touchscreen presented in 3D.

Other useful features in the easy-to-live-with cabin include two separate gloveboxes set one above the other, drop-down sunglasses holder, slide-out cupholders (one either end of the fascia), a large bin beneath the central armrest plus a lidded storage box recessed into the top of the dash along with a handy coin box.

Sit in the back and the first thing you appreciate are the views out; no boring trips spent staring at the back of a front headrest in a D-Max because rear passengers sit about four inches higher than those ahead of them.

Two grown-ups can enjoy the padded centre armrest and relax leaning back at a comfortable angle; there's plenty of elbow and shoulder room, too, and decent room for knees and legs. Cupholders drop down from the rear of the centre console when required and small bottles will fit in the door bins. A minimal floor ridge means three adults can travel side-by-side without anyone suffering from 'sardined feet'.

The hardtop fitted over the pick-up's loadbed is smartly trimmed and features a lift-up rear glass hatch and slide-open side windows. Loading is easy either through the hatch or with the hatch and tailgate dropped down to its horizontal position.

A heavy-duty liner is fitted so a hose and a couple of minutes' of your time is all that's needed to keep the large loadbay-cum-boot sparklingly clean. Extra load space in the rear cab is, of course, available by folding down the one-piece rear backrest (usefully, it folds completely flat).

On the move the physical comfort is underscored by passenger-car levels of NVH (Noise, Vibration and Harshness) — there's no commercial 'buzziness' when the D-Max is going about its business. In fact, it's one of the quietest vehicles in its class.

The D-Max underwent 4,000,000 kilometres of endurance testing (the equivalent of 100 times around the world). If you're minded to achieve just one percent of that then the SatNav will get you started — it contains the latest maps of more than 40 European countries and can give turn-by-turn voice guidance in eighteen languages and can suggest an alternative route to avoid the jams.

Safety-wise the D-Max comes with front, side and curtain airbags and scored a four-star Euro NCAP safety rating. Pro-actively ensuring that the D-Max stays on the driver's chosen course are Electronic Stability Control and Traction Control systems.

The D-Max is even kind to pedestrians. Its front-end has been engineered to minimise pedestrian injuries — during an impact with a polypropylene bumper that absorbs impact energies and is designed to 'lift' pedestrians onto the bonnet rather than knocking them down. And to help with 'clean air', the D-Max's engine has been equipped with a dual Exhaust Gas Recirculation system that significantly decreases Nitrogen Oxide (NOx) emissions.

For an off-road pick-up the ride is pleasant — when you think about it going places where few people know there are places it makes sense; alongside reliable handling and a decent ride on blacktop, off-road the suspension soaks up the most severe bumps. While the D-Max wears big boots, the 255/60 profile Pirelli Scorpion tyres do as much for comfort as they do for grip.

The D-Max has proved to be extremely popular with UK buyers. No surprise really as the Isuzu is known all over the world as a long-lasting, off-road capable workhorse. But as British customers have found, it also makes a competent recreational vehicle that doubles as a practical family car. — MotorBar