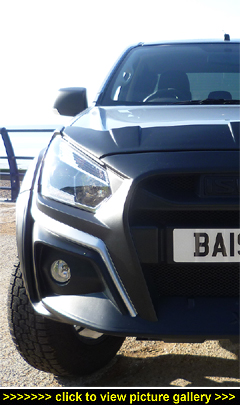 “Brits enjoy an ongoing love affair
with pick-ups, many now choosing
to  use them as ‘lifestyle’ wagons.
Isuzu’s new ‘extraterrestrial’ XTR,
which comes locked-and-loaded for
all landscapes, from urban jungles
to the Indiana Jones variety, should
really get them going...”

FOR A START it absolutely looks the part, bringing as much Fury Road-muscle to the party as Isuzu's other all-terrain road warrior, the eye-poppingly hardcore D-Max AT35.

Identifying the XTR is a thrusting nose with bonnet protector, intriguing black side steps, black-clad wheelarches with vibrant green lozenge-shaped inserts capping 6-spoke satin black alloys shod with 32-inch Pirelli Scorpion off-road rubber, and a set of 'Radical' graphic decals. Further boosting its rugged appeal is its height — it sits confidently astride the blacktop above 250mm of ground clearance.

The XTR looks tough; and it is tough — just sitting in one parked up you feel very secure indeed. With tweaks by brake, steering and suspension specialist Pedders, the new chassis hardware is nuanced by some vibrant green highlights. Make no mistake — the XTR is built to face-down the harshest wildscapes. As mentioned, it also benefits from 250mm of ground clearance and overall it's a genuine all-terrain explorer that's ready and willing to tackle just about anything you've got the nerve to point its nose at.

The really good news is that it's not totally about mud-plugging — as it evident the moment you swing open the door and climb aboard. Even if you don't use them you'll for sure notice the tough-looking angular-bar framework side-steps: their lozenge-shaped infill allows drainage for mud, sand and snow and despite their durable textured grip-enhancing black finish they're designed not just for stepping on but also to prevent stones and rocks damaging the bodywork.

The lifestyle-focussed cabin accounts for a decent chunk of the XTR's 5.4-metre length. Supportive, heated sports-style seats upholstered in leather, suede and carbon-fibre leather are the order of the day and boost the upscale vibes; there's also bright green embossed XTR branding to the backrests with matching overstitching while the good-to-grip, flat-bottomed multifunction steering wheel is trimmed in a mix of leather and suede and finished with hand-sewn green overstitching.

Even more appreciated is the full fist of headroom along with brilliant all-round visibility that makes you master of all you survey; most importantly when tackling the rough stuff. Rather nice, too, is that those behind the wheel of a Ł100,000+ SUV have to look up to you. Other touches that make you feel at home include the clear dials and multifunction driver's information display, a trad-style pull-up handbrake that feels so much more reassuring than one of the more common finger-operated switches, large knobs and buttons for non-distracting, on-the-go AirCon adjustments, big outer armrests along with a padded central one with room to share, and height-adjustable front belts.

There's plenty of in-flight storage, too: a handy bin in the top of the fascia with a flip-up lid, two separate gloveboxes, some nifty and very useful slide-out 'mini drawers' at each end of the dash that can convert to cupholders, a drop-down overhead case for your shades, bottle-holding door bins, a good-sized box under the central armrest, siamesed dual-use cupholders, and a shelf in the fascia below the steering wheel.

The rear cab is easy to get in and out of: along with the wide and very usable non-slip side-steps there are overhead pulls. Once in, you sit high above the floor as well as being six inches higher than those seated up front. Uninterrupted views out and a padded centre armrest, bottle-holding door pockets, big oddments pouches on the front seatbacks and twin pop-out cupholders all help make it very liveable — as too does the headroom and decent knee- and foot-room.

Although you sit quite upright, it's comfortable; even for long trips. Foot-room for three is matched by three belts and three headrests. Isofix child seat fittings are standard on the rear outer seats and there are child locks for the doors. Incidentally, if you're not carrying passengers the versatile rear bench offers various cargo-enabling permutations.

For something so brawny and off-road-focused, the XTR rides the blacktop acceptably. Sure, speed humps and the usual potholes and raggedy British road toppings can be felt; but it stops there — your teeth fillings certainly won't suffer. Like all of the pick-up breed, it rides better with some weight in the back. That noted, and despite the all-terrain ride height, even lightly laden the XTR always feels confident.

Engine-wise there's only one unit available to slot under the bonnet: a 161bhp four-pot 1.9-litre turbodiesel that makes 265lb ft — and that's enough to get it well past 'the ton' (to 112mph) with 62mph done and dusted in 13 seconds. Keeping up with the traffic is not a problem.

Officially the combined figure for the XTR is 36.2mpg which, considering the standard-fit four-wheel drive and imperious body size, is really rather economical — we recorded 31.1mpg over the course of a hard-driven week and we'd expect more 'normal' drivers to edge that up. Transmission-wise you have choices: manual or automatic — our autoboxed version (with a manual mode offering +/- lever-selected, driver-determined changes) performed smoothly and made day-to-day driving a doddle despite the XTR's outsized physical footprint.

While spending far more will buy you a 4x4 SUV that will be more sporty to drive on-road, it's off-road where the XTR will leave it trailing in its wake. That said, the XTR feels perfectly at ease trundling along with city tarmac beneath its Pirelli treads; it steers honesty, stops and goes fluently and, despite its far-flung borders and muscular wheelarches, is a cinch to place (okay, so it does overspill most standard parking spaces — but then so does a Rolls-Royce). The XTR's Kevlar ceramic brakes aren't there just to glam-up the spec-sheet; they really do boost the stopping power.

As the blacktop disappears in the rearview mirror the XTR comes into its own, making you want to let out a Die Hard Yippee-ki-yay! as it punches through rough territory.
In addition to 2H and 4H all-wheel drive settings there's a low-ratio 4L for when the going gets really tough.

And then there's the XTR's bespoke suspension — upgraded and fitted with front suspension upper arms and specially-designed damper units to achieve a longer suspension articulation, courtesy of off-road specialist Pedders, it endows the XTR with the right tools for all grades of off-tarmac exploring. The deeply-sidewalled Scorpion All-Terrain Plus tyres, while impressively quiet on-road, are very capable off-road on rocks, snow, mud, grass and sand.

A locking centre diff is, of course, on-call for tackling the harshest conditions, as is a very effective hill descent control system as well as practical approach, departure and ramp angles (respectively 32, 25, and 24 degrees). Combined with the XTR's great all-round visibility, it all adds up to some serious off-road prowess.

The XTR's matt black roller loadbed cover creates a secure weatherproof 'portmanteau' and adds extra versatility and the deep and sturdy tailgate is damped for safe and easy dropping. Naturally the loadbed is protected by a bring-it-on liner which can be easily hosed down. And as far as everyday pick-up stuff goes, the XTR is one of the very best: tow a braked 3,500kg? No problemo; haul a 1,125kg payload behind the cab? Easy-peasy Japanesey!

The macho XTR would bring a bright ray of sunshine even to the Apocalypse. Designed for genuine off-road enthusiasts as well as drivers who want a formidable all-purpose vehicle to complement their lifestyle, its double-cab is great for hauling bodies while its loadbed aces cargo. Throw in a five-year/125,000-mile warranty — emphasising that this D-Max is intended to work hard and play hard every single day of its long life — and the XTR is a tough one to beat. ~ MotorBar