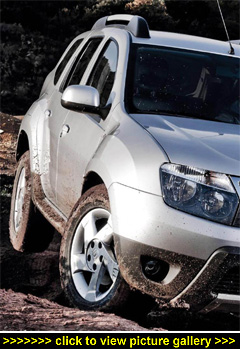 “Not even launched yet and just
voted Scottish Car of the Year, the
Dacia Duster compact SUV has
already attracted over 1,000 orders
from UK customers with an eye
for a bargain...”

FIRST SHOWN IN THE UK at the 2012 Goodwood Festival of Speed, the brand officially goes live in this country in January 2013 with the first Dusters being delivered to the first buyers in March — in time for the new '13' registration plate month.

The Duster is completely unrivalled in terms of its mix of ability, space, running costs and pricing: Upgrade to diesel, tick the four-wheel drive option, choose the top spec and you'll still be astonished at the comparatively low drive-away price.

Priced from an eye-catching Ł8,995 for the 105bhp 1.6-litre petrol-engined two-wheel drive models and up to Ł14,995 for the 109bhp 1.5-litre dCi diesel-powered four-wheel drive versions, it's no surprise savvy motorists are clamouring to get their hands on a Duster — while there's nothing quite like the thrill of a new car, it's even better when it comes at a price that won't break the bank.

Dacia is Renault's budget brand and has been sold since 2004 in mainland Europe, where last year 350,000 of them were bought. Now it's the UK's turn for the Indian-built Duster SUV. All Dusters are built at the Nissan-Renault alliance factory in Chennai, India and in the UK will be sold through 135 Renault/Dacia dealerships.

Standard exterior features for the entry-level (Access trim) five-door, five-seater include 16-inch steel wheels and roof bars and, on the inside, electric front windows, four airbags, height-adjustable steering wheel and ISOFIX points on the outer rear seats. 4x4 versions get, at no extra cost, an emergency spare wheel. ABS and Emergency Brake Assist plus remote central locking are also core features, together with a radio.

Moving up the range will bring value-seekers to the Ambiance trim level (Ł11,495 to Ł13,495) which provides not only a better specification but also the enhanced performance and economy of a diesel powerplant. Among its biggest draws are a 4x20W radio/CD with AUX, Bluetooth, USB connectivity and steering column-mounted fingertip controls, plus body-coloured bumpers, 60:40 split/folding rear seats, front fog lights and a height adjustable driver's seat.

The flagship of the Duster range in the UK — and the expected best-seller accounting for around two thirds of orders — will be the Laureate. Although costing only Ł12,995 to Ł14,995, this top Duster includes 16-inch alloy wheels, AirCon, four electric windows, leather steering wheel, and trip computer.

The styling inside and out also moves up a notch, with satin chrome for the roof bars, scuff plates, side sills and door handles. Body-coloured, heated and electrically-adjustable door mirrors also appear. In the cabin, piano black detailing adds a touch of class throughout, specifically on the door handles, centre console surround, and steering wheel and door panel inserts.

As well as its tempting price and equipment, the compact Duster SUV provides reasonable passenger and load space.

Its well-proportioned boot gives 475 litres (408 in the 4x4 with a spare wheel), while optimum load space, once the rear seats are dropped, increases to an impressive 1,636 litres, (1,570 litres with a spare wheel). More than enough, in fact, for several dogs, a seizable amount of leisure equipment, or even the proverbial kitchen sink.

It's quite clear that the headline Ł8,995 price draws-in potential buyers and then the customer, with the help of the salesperson, realises that realistically the most practical version, given our roads and liking of SUVs, is in fact the top-spec (Laureate) diesel 4x4 model, as tested here. Backed by a three-year, 60,000 miles warranty, everything adds up to a good deal.

The top speed is 104mph with zero to 62mph taking 12.5 seconds and fuel consumption is officially 53.3mpg in the Combined Cycle; with CO2 emissions for this 4x4 version at 137g/km, road tax is Ł120 a year. Company car drivers will pay 21% Benefit-in-Kind tax.

The quality of the vehicle looks durable, the interior plastics feel a bit hard and the road holding can feel a bit top-heavy during cornering given the relatively narrow tracks of 1,560mm at the front and 1,567mm at the rear. The Duster's 1,695mm height also plays a part in this feeling of a tall and narrow vehicle to drive.

With an overall length of 4,315mm and a width of 1,822mm, the payoff is plenty of interior seating and load space. It will also be a useful tow vehicle as well, thanks to its braked towing weight of 1,500kg.

The Duster's ride comfort is good although the steering lacks feel and you just drift along seemingly detached from any feedback from the vehicle.

Other compact SUVs are more handling-focussed but that comes at a financial cost and the choice will be, Do I buy a new Duster or do I buy a second-hand SUV such as the Ford Kuga, VW Tiguan or Suzuki Grand Vitara?

While there is certainly appeal in buying a brand new car, the smart way might be to compare the Dusters after they arrive in the UK against a proven used compact SUV — and there are plenty of low mileage ones on the market.

Other than price and its use of modern Renault engines and drivetrain components, the Duster does not excel in any particular area; but the sum of everything impresses, led of course by price. Little wonder I have been seeing thousands of these Dusters for a while now in French provincial towns where it has become the family vehicle (or country workhorse) of choice during these difficult financial times. — David Miles