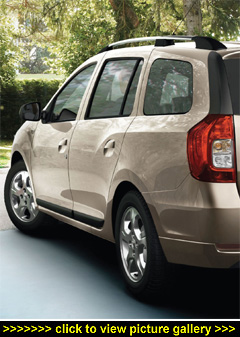 “Priced from just Ł6,995, it’s the
cheapest new estate in the UK
and for some buyers who want a
budget priced durable new car,
that alone will be enough to make
the roomy Dacia Logan MCV
appealing...”

ONE OF THE NEW BRANDS ON THE WAY UP in booming UK new car sales is Dacia, the Romania automotive company. They were founded in 1966 producing older Renaults under licence before being bought by Renault in 1999. In 2004 Dacia was re-launched into most Western European Markets where it has become the fastest growing automotive brand for eight years in a row.

In January 2013 Dacia came to Britain, first with the Duster crossover SUV then the Sandero supermini five-door hatchback; the taller Sandero Stepway crossover version arrived in June. In November their latest offering, the Dacia Logan MCV (Maximum Capacity Vehicle), a C-segment estate range joins the line-up and it is being billed as the cheapest estate on the market — priced from just Ł6,995!

Dacia, pronounced — "Datch-ya" — with Dacia in Romanian meaning "home", has already exceeded 11,630 new car sales in the UK in the first nine months of this year. The brand is sold through all 130 UK Renault dealerships. Jeremy Townsend, Director of Communications for Renault and Dacia in the UK said that UK customers for Dacia models have in the past been used car buyers but, at the Dacia's value-for-money prices, can now buy a brand new car for the same outlay.

A brand new, family-sized estate for Ł6,995? Surely there must be a catch to it. Not so — the only catch is Dacia published on-the-road prices are what they say they are. No haggling and, of course, it's expected that the spec will be basic at that price. Pay a little more though (up to Ł10,795 for the top-of-the-range 1.5-litre dCi 90bhp Laureate) and the spec and performance improves.

Specification options are: Access, Ambience and Laureate but their headline-grabbing budget model is only available with Access spec and the lacklustre 75bhp 1.2-litre petrol engine.

That was the version I tried. A big shock, given today's fully loaded spec press test cars we drive day in and day out — for a start, the door key has to be used to open the doors. Remember that. No central door locking for this price on this version. Equally evocative were the wind-up windows and the manually adjusted front door mirrors… but, yes, there was a heater.

Bringing the on-the-road price of my test car to a still very affordable Ł7,340. But the argument remains for some customers, do they buy a new Dacia or do they buy a more highly specified used model for roughly the same price? It's a difficult call but owning a car from new does have appeal for many people.

That call becomes more difficult if reasonable specification is important rather than just a cheap new set of reliable 'wheels'. Ambience will improve the car to some extent but it is only really the Laureate level where AirCon, electric front and rear windows, electric door mirrors, onboard computer and even a height adjustable steering wheel appears.

The problem is the expected best-selling Laureate spec models with the 1.2-litre and 898cc turbocharged petrol and 1.5-litre turbodiesel engines cost from Ł8,995 to Ł10,795 which really then puts them in the same price league as a high-specced used estate from mainstream brands with around 30,000 miles on the clock.

Other than its headline starter price, the big selling point of the new Dacia Logan MCV is the space it offers: seating for five with good rear seat legroom and a huge load area which starts at 573 litres and goes up to 1,518 litres.

The interior, as I've said, is relatively basic but the carrying space is its trump card and very appealing. With the 1.2-litre normally-aspirated low power 75bhp petrol engine model and its five-speed gearbox available for a brief first test drive, this version felt just about OK. The sluggish zero to 62mph acceleration time of 14.5 seconds says it all and the top speed, although immaterial in real-life, is only 97mph. Lugging a load, the performance would obviously be even less.

Officially this engine will return 48.7mpg in the Combined Cycle and I would expect a more realistic figure of around 35mpg. CO2 emissions are 135g/km so road tax is Ł125 per annum but insurance is expected to be Group 4 so running costs are as commendably low as the purchase price.

Reasons to buy include the low price, impressive load space, modern exterior styling and the comfortable ride. It's also likely to be durable and reliable. At the end of the day you get what you pay for but for some buyers who want a budget priced, durable new car the roomy Dacia Logan MCV will be appealing. — David Miles