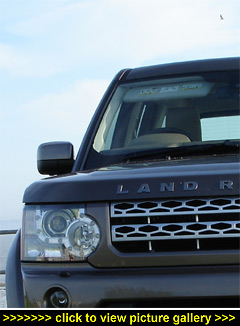 “Britain definitely does have talent.
We’re not talking song and dance
here, but motoring talent. And while it
may now be owned by people on the
other side of the world, the Land
Rover Discovery’s talent is 100%
home-grown. Brit Rules, Okay!”

BUY A DISCOVERY and you're buying a number of cars skilfully integrated into one, all neatly fitted within each other like a Russian matryoshka nesting doll. Some Disco drivers seem perfectly happy with only the attractive 'outer doll', seeing their Land Rover as simply safe, refined and luxurious family transport — a 7-seat role it plays with aplomb — and are content to leave all the high-tech wizardry in its standard default setting.

That's fine. However, a single twist of the Disco's Terrain Response rotary knob will unwrap a whole range of abilities that turn it into a full-blooded explorer's war-horse; a machine that will go head-to-head with the very worst weather conditions nature can throw at it as well as ford rivers and climb mountains.

The Achilles' heel of most SUVs is tarmac. Not so the latest-generation Discovery — it's seriously competent on the blacktop; the nicely-weighted steering is direct enough for you to press-on confidently through corners, bends and along fast, winding A and B roads, all the while staying flat and composed. The brakes (twin-piston sliding callipers with 360mm ventilated discs at the front and single piston with 350mm ventilated discs at the rear) do a sterling job.

It's no idle boast to say that in all environments and all landscapes, on roads or off them, this fourth generation Discovery serves up a satisfying blend of premium refinement and driver-friendly dynamics.

Better yet, the ride is seriously comfy whatever your driving style; the bump-smothering air suspension is a cure-all for our poor UK roads, soaking up all kinds of imperfections. Land Rover's engineers have clearly been busy with the soundproofing too, because mechanical noise and even wind and tyre roar, especially when cruising, has been all but banished from the cabin. Journeys pass by almost unnoticed until the SatNav utters those three magic words: You have arrived!

Built to tackle the world's worst roads, the two-and-a-half tonne Disco is consequently no lightweight — fortunately there's now a 241bhp 3.0-litre twin-turboed diesel nestling in the engine bay. And thanks to its groundbreaking parallel sequential turbocharging system, throttle response is ultra-sharp.

Press hard on the accelerator and the Disco gets briskly off the line, the speedo needle hitting 62mph in 9.6 seconds. It's a lively unit with enormous torque — 442lb ft — that comes in handy not just for towing and off-roading but on-road where it will punch you safely past slower traffic. Our week's hard-driving saw an overall average of 27.7mpg recorded — pretty close to the official 30.4mpg combined figure and good for a 500+ range between fill-ups.

So far as driveability goes, no one need be worried by the Discovery's imposing looks. In spite of its 4.9-metre length and 2.2-metre width, driving the '4' is a walk in the park — proof of life here is the number of Discos you see conscripted into school run duties. And one of the key reasons this happens is that few other cars provide a better view of the road ahead — today that's worth it's weight in gold in incidents (and insurance claims) avoided.

And the driving position is, without doubt, one of the best, with plenty of power adjustment in every direction. Another big plus for kiddy-carting Mums is seven seats — it should be noted that even in seats six and seven, real adults can, and do, travel comfortably. Not forgetting the smooth-shifting six-speed adaptive automatic transmission with Sport mode for those get-me-to-the-school-on-time moments.

More demanding driving that calls for manually controlled shifts can be done in CommandShift mode; and, when appropriate, a straightforward rocker switch engages the transfer 'box's Low range.

And despite the mass of high-tech features the neat and orderly cabin is extremely user- friendly thanks to crisp graphics and, in particular, a colour touch-screen which manages numerous functions at the touch of a finger as opposed to the flick of a switch. Fit and finish is first class, as too are the high-end soft-touch plastics and leather as well as the classy Grand Black Lacquer fascia veneers.

Use all seven seats and you'll still have still 280 litres of boot space. But fold away the pair of third row seats into the boot floor and with five aboard there's more than enough luggage space. And if it's more space you'll be wanting with just the front seats occupied, then the second row can also be dropped (no need to remove the headrests) as well as the third row to form a genuinely flat-floored loadbay offering a cavernous 2,558 litres.

The split tailgate's lower section makes loading and unloading much easier; you can also reduce the loading height by selecting the air suspension's 'Lower' setting. The sturdy lower tailgate also makes a neat picnic seat or even a handy viewing platform at air shows and the like.

With a Ł50K price tag you'd expect the range-leading Discovery 4 HSE to come well specified. It does. The list of kit is simply too long to detail here but the spec is of the 'you name it, it's already fitted' variety. Highlights include keyless entry and start, dual-zone climate control (very efficient both hot and cold), heated seats front and back (the 3-stage heating is outstanding, as too is the heated steering wheel rim), Windsor leather, hard drive-disk SatNav touchscreen multimedia system, harman/kardon Logic 7 14-speaker surround-sound hi-fi, rear-view camera, three-panel panoramic sunroof (two fixed; the leading roof has powered tilt/slide operation) and, for night-time driving, interior 'mood' lighting.

Talking of which, Arctic Snap or Indian Summer, the Disco is well equipped to master them all. Its Terrain Response system never sleeps and every time you switch on it starts up, normally in its General (everyday road surfaces) program. Others are available by turning the rotary control just ahead of the selector lever: Grass-Gravel-Snow; Mud-Ruts; Sand; Rock Crawl.

And with a maximum 28-inch (700mm) wading ability boosted by large approach and departure angles, it's well-equipped to tackle just about any kind of terrain you care to point its elegant Range Rover-esque nose at — it goes without saying that the Discovery 4 is more capable off road than ninety per cent of owners will ever discover.

Whatever you do (or don't!) select, you can trust the Disco to take care of business, automatically optimising vehicle systems including the transmission, suspension and differentials as necessary. For really tricky conditions, the status of the differentials can be viewed on-screen.

Also adding considerably to driver feedback is an all-seeing 'surround view' camera system — five digital cameras strategically located around the Discovery that provide 360-degree views (any two of which can be selected simultaneously) around the vehicle to aid manoeuvring at speeds below 11mph.

Invaluable off-road when it may be impossible or unsafe to leave the vehicle and check, it also comes in very handy when parking in tight spaces as well as providing additional safety on-road — for instance, emerging from a completely blind side turning onto a busy road, the cameras at the front can be activated so each is looking sideways (junction view) whereas otherwise you'd have to commit (and risk) the whole front end as far back as the driver's window before you could physically see if it was safe to pull out. In addition, all views can be zoomed in and out and there's a Tow Assist function to make reversing a trailer easier.

The inevitable comparison — inevitable precisely because the Discovery is so good — is with its big brothers: the more expensive Range Rover (Ł68,985-85,745) and Range Rover Sport (Ł48,035-72,545). While a less blatant status symbol than either, the Discovery 4 (Ł36,785-Ł50,785) offers something they don't — genuine (and genuinely comfortable) seating for seven adults. Quite honestly, if you need a practical, versatile, family-friendly seven-seater SUV that will go anywhere and go head-to-head with any weather, there's nothing to touch the '4' even if you pay more. Now that's a Discovery! — MotorBar