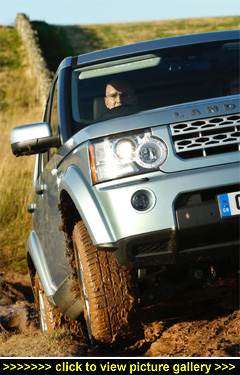 THE LATEST DISCO'S V6 runs with parallel sequential turbocharging — in use most of the time is a larger primary turbo with a smaller secondary turbocharger that kicks in whenever acceleration or more power is called for.

The main benefit of this system is that turbo lag is reduced and immediate torque response sharpened, with 442lb ft of 'grunt' available from 2,000rpm. CO2 emissions have gone down, from 244 to 230g/km and power up, from 241bhp to 251bhp.

The major tech upgrade for the 2012 year model is the new eight-speed automatic transmission, first used in the latest Range Rover V8 turbodiesel. Now fitted in the Discovery, it provides closer gear ratios with a higher overdrive ratio which in turn boosts economy and contributes to the lower CO2 emissions. Equally beneficial, the eight ratios ensure near-seamless gearshifts. Adding to the transmission's polish is software that monitors the driver's input then optimises the shifts to match the driver's style.

Also fitted is a Drive Select rotary gear selector with Park, Drive, Neutral, Reverse and Sport modes along with steering wheel-mounted paddle-shifters as used on Jaguar and Range Rover models.

The Disco's All Terrain Response is no longer operated by a rotary dial but now uses close-to-hand switchgear for quickly selecting the correct mode for road, ice/snow, off-road, sand and serious off-road as well as low ratio and hill descent control.

Fuel economy has also improved — from 30.4 to 32.1mpg. Okay, it's only up by a couple of miles per gallon but then every little helps! More importantly, my test Disco — the range-topping 3.0 SDV6 HSE model — very nearly matched the new figure, recording 31.2mpg — impressive for a heavyweight 2.7-tonne seven-seat 4x4 with permanent all-wheel drive.

Unfortunately, despite the lower CO2 emissions, the first year's road tax is still Ł790 and Ł445 for subsequent years; and company car users will continue to pay the maximum 35% Benefit-in-Kind tax.

Of course these tax costs will be no deterrent to customers able and willing to spend between Ł37,995 to Ł51,195. And there's no shortage of them — despite the economic climate, the rising cost of fuel and the high taxation costs, 2011 sales of 4x4s and SUVs increased by 6%.

Visually, changes to the 2012 Discovery are minimal: tweaks to the front grille, new alloy wheels, changes to the touchscreen graphics and upgrades to the premium quality SatNav and music systems.

All the big changes are to the engine and transmission and in line with the Disco's ongoing evolution. It remains a tough, heavy duty off-roader with permanent 4WD, easily identified by the roof's rear 'step-up' that provides more headroom for the second and third row passengers.

While the boxy, seven-seat Disco remains a no-nonsense and roomy 4X4, it has moved significantly upmarket. Proof is to be found in the cabin where I was hard pressed to spot the differences in specification or quality between this latest Discovery and the latest Range Rover.

Especially so on the top HSE model Disco which boasts high-grade leather upholstery, a crafted, leather-topped fascia and all the luxury kit you would expect to find in a premium brand saloon.

But has going upmarket been the undoing of the Disco? Originally positioned between the utilitarian Land Rover and the luxury Range Rover models, the first Disco was designed to be a serious off-roader with a bit more interior comfort and driving refinement than the uncompromisingly functional Land Rover.

As such it was a country-user's workhorse, one that could be washed out and with the option of seven seats — a feature first brought to the market by Mitsubishi's five-door Shogun.

In spite of the luxury trimmings and classy interior, today's Disco remains the optimum off-roader, easily pulling 3,500kg; it also performs brilliantly on and off road and offers seating for up to seven (or load space of up to 2,558 litres).

While no longer an affordable 4x4 workhorse and with high road and company car taxes, the latest technical changes improve the driving refinement and reduce running costs (but not taxes). It also has a comfortable exec-spec interior and is imposing to drive. As a heavyweight, go anywhere 4x4, there's no better — and the latest improvements keep it ahead of the field. — David Miles