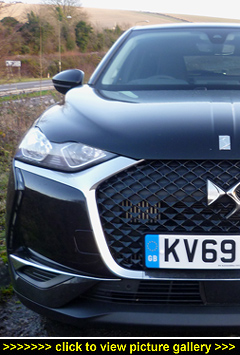 “Everybody’s doin’ it, doin’ it —
‘everybody’ being carmakers and
‘doing it’ being turning out compact
uban-friendly SUVs. Now DS have
thrown their Parisienne-chic DS 3
Crossback into the ring...”

JUDGED BY ITS DS 7, the now stand-alone French marque has already established a distinct avant-garde slant to its automobiles; its DS 3 Crossback is likewise refreshingly different — a difficult trick to pull off in a market sector awash with a multiplicity of like-looking crossovers and sports utility vehicles.

For those determined on une vie moins ordinaire (a life less ordinary) the DS 3 Crossback is a fine place to start. Externally the styling majors on in-vogue detailing such as the motorised flush-fitting chrome door handles that pop out when you plip the key.

Other distinguishing touches include a prominent hexagonal, fingertip-luring 3D grille, deliciously shapely siamesed tech-look headlights cut into the bonnet, 'shark fin' kick-ups on the rear doors, and an intriguingly squared-yet-somehow-also-rounded tail incorporating a pair of big-bore chromed-tipped tailpipes — all signed off with a zeitgeisty DS monogram on the tailgate. Together they mark the Crossback out as anything but ordinaire.

And that's before you add colour. Dressed in one of DS's vivid metallic paint finishes — the bold 'n' brazen Imperial Gold is especially dramatic — few of its trendier rivals can catch the eye as quickly as does a DS 3 Crossback. Swing open the driver's door and the avant-garde treatment runs on inside.

First impressions are of diamonds, and then more diamonds... Given that they're a girl's best friend one could safely bet on the DS Crossback's interior designers being from Venus because the theme is used generously, and to great effect, with diamond-shaped switchgear and detailing along with diamond 'quilted' soft black leather upholstery. The result is a cabin stylistically different to almost every other.

The dash architecture is clean and simple with the focus at its centre where a ten-inch infotainment touchscreen sits at an ideal height, tilted back like a laptop. Beneath it and sitting flush with the fascia is a cluster comprised of diamond-shaped touch-sensitive switches and menu jumps arranged round the central pair of air vents. Below this sharp-edged grouping is the Engine Start/Stop button.

Directly ahead of the driver and seen through the sporty flat-bottomed steering wheel is a digital instrument panel with crystal clear graphics. Naturally you can select a display that shows you as much or as little as you wish to see; the default is hard to beat for clarity — a large digital speed readout topped by the posted speed limit, with slim vertical bar-graph strips at the outer screen edges for revs and fuel. Range, of course, is also indicated but with just these essentials on show there's minimal distraction when driving in busy traffic.

The upscale cabin feels far roomier than you might be expecting from the Crossback's compact 4.1-metre footprint. Despite the 'high-ride' looks, the seat's hip-point makes entry an easy two-step: perch your derriere; then swing in your legs. Once in you have a full fist of headroom; more if you lower the height-adjustable seat. The front chairs are shapely, supportive and very comfortable with bolstering that keeps you securely located through the twisties and enhances the nicely commanding driving position that lets you see the whole bonnet (views back are equally informative). Combined with the subtle luxury, the seats also add a mischievous hint of upmarket 'club racer' to the cabin, something that's borne out by the Crossback's chuckable nature.

Also up to scratch are the comms. The large HD touchscreen is home to DS's Connect infotainment system with integrated TomTom navigation; smartphone mirroring is covered by Apple CarPlay and Android Auto. Other features include online search, fuel forecourt, parking, and weather information, plus live traffic updates.

Your music needs are taken care of by a DAB digital radio and handsfree Bluetooth with media streaming. Two USB jacks are provided up front and the speaker tally is eight, so more than enough for most listeners. The climate control settings can be viewed full-screen whenever you like or need to make adjustments while other essentials include an emergency call assistance system. You can also use your voice to operate the SatNav, phone, audio, and climate.

The navigation offers 3D mapping with crisp graphics that are easily readable both day and night — it's also supported by foolproof spoken directions. Nice, too, that you can also have the mapping as a full-width background in the multi-adjustable instrument panel. Also appreciated is a Speed Recognition & Recommendation feature: exceed the posted limit and the speed limit sign in the instrument panel flashes to alert you without making a big thing about it. All essential stuff at a time when it's never been easier to incur points on your licence.

In-cabin storage includes a good-sized drop-down coin-box in the lower fascia, capacious bottle-holding door pockets, a bin with a lift-out rubberised coin tray beneath the sliding centre armrest between the front seats, a pair of dual-use siamesed cupholders, an open tray ahead of the selector lever for your mobile, and a real-world glovebox.

Sitting in the back the views out aren't anywhere near as restricted as they might appear from the outside by the high beltline and the shark fin-style rear windows. There's ample headroom and space for legs and feet for anyone of average build and, yes, three can be parked side-by-side at a pinch. That noted, two grown-ups is the likely maximum that owners of compact SUVs such as the Crossback are likely to carry in the back, and then probably on an occasional basis. More likely it will be youngsters who get to travel there regularly in child seats, for which there are Isofix mounting points on both outer rear seats. There are also usefully large seatback pouches and usable door bins.

The Crossback's fully independent multilink rear suspension does a good job of providing a settled and satisfactory ride, helped by the comfort-orientated 60-profile sidewalls on its Michelin tyres (wrapped around smart machined-faced black 17-inch alloys). Add to that a cabin well insulated against road and wind noise and rolling refinement is good enough to counter crumbling urban blacktop. However, there's still enough firmness and well-managed body control to not take the edge of the DS's road-holding when upping the pace outside of 'thirty' limits. Motorway trips are relaxing, and the Crossback always feels reassuringly settled.

The front-wheel drive Crossback makes fine use of the PSA Group's (Peugeot, Citroen, DS, and now Vauxhall brands) newest platform, which also underpins the latest Peugeot 208. The Crossback's 170mm of ground clearance adds a degree more dexterity for climbing kerbs in town (just don't park there or you'll likely get a ticket!).

Thanks to electric-assisted power-steering that's reassuringly progressive and direct enough to play along whenever some quick cornering is called for, placing the DS 3 accurately is a breeze. Further helped by a compact flat-bottomed steering wheel with a lovely grippy leather rim, it's an easy car to punt about whether you're parking up in a packed multi-storey car park or rat-running through town.

Leave the cityscape in your rearview mirror and you'll quickly find the DS 3 is enjoyable to drive on faster, less-well-travelled roads courtesy of its respectable handling and good grip. Plus you have a choice of drive modes (Sport, Normal, and Eco). There are paddle-shifters on the wheel and, if you want maximum control of the shifting, a dedicated Manual setting. By the way, Sport mode also brings the benefit of some extra weighting at the helm.

Not that you have to drive everywhere with verve to enjoy your time in the DS 3 — even pootling is rewarding. The brakes, ventilated discs at the nose and solid discs at the rear, bring the numbers down quickly while keeping everything composed and stable.

If petrol is your poison then you get to choose between three power outputs: 99bhp, 129bhp or 152bhp. Swing low and you get a six-speed manual 'box; swing high and the gearbox will be a self-shifting eight-speeder. If you're still keeping faith with diesel then you're in luck — a 100bhp four-cylinder 1.5-litre HDi turbodiesel awaits you. However, if you're all about green 'n' clean then the 100% electric E-Tense will be right up your street.

The petrol-drinkers are all turboed PureTech three-cylinder units. We've been driving the top-rated 152bhp that runs to 129mph, does 0-62mph in a persuasive 8.2 seconds, and has an official combined cycle fuel consumption of between 41.7 and 46.6mpg. We weren't trying to drive economically (but we did leave the private jet at home) and still logged an easily-come-by 41.7mpg at the end of our week's hard testing.

This 152bhp unit has plenty of get up and go and you'll need to watch your speed on back roads, where it's all too easy to break the national limit. A characterful three-cylinder soundtrack and punchy low-down and mid-range grunt — 177lb ft @ 1,750rpm — makes it easy to give this torquey direct-injected and turbocharged 1.2-litre its head. Do so and it will definitely keep you entertained — even more so in Sport mode. And throughout it all the 8-speed autobox serves up smooth gearchanges whether your style is Driving Miss Daisy or The Italian Job.

Okay, so the Crossback's boot is not the biggest out there; but at 350 litres it's more than fit for purpose. It's also a regular shape to enable you to make the most of it. A parcel shelf luggage cover means quick access to the contents without tugging away at a roller blind. There is a lip to load over and a shallow 'step-up' from the boot floor to the folded rear seatbacks in loadbay mode but it's not a problem.

And for those occasional loads or more regular trips to the woods with your four-legged friend, the cargo bay stretches to a useful 1,050 litres once the 60:40-split rear seats are folded. When you need to, you can tow a braked 1,200kg. The Crossback stores a space-saver under its boot floor which is far better than one of those ubiquitous 'puncture repair kits' supplied by most carmakers that are no help at all if the sidewall is dameged.

There's little chance that DS's high-end take on a compact SUV won't appeal to your heart. Thankfully its charm goes deeper than its 'raised riding', town-friendly, attention-grabbing image with space and practicality enough, plus it's enjoyable to drive — and not just in the city. So go ahead, stake your claim to a life less ordinary! ~ MotorBar