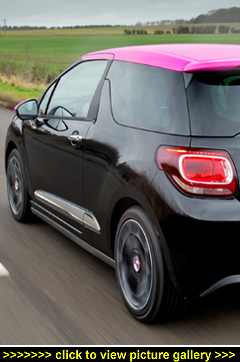 “Citroen’s in the pink with its chic
DS3 — thanks in no small part to
the 20,000+ UK sales the design-
led DS series generated last year...”

CITROEN IN THE UK are doing 'quite nicely thank you' as attested to by the 78,358 cars sold last year, and even better sales in the first quarter of 2014. One of the main reasons for the strong sales showing are their DS 'designer' versions; in particular the DS3 three-door supermini-sized hatchback along with the two-door cabriolet variant. Together these two body styles accounted for 20,480 UK sales last year, with the hatchback being by far the most popular.

Apart from its chic styling and sporty performance, the DS3 has proved popular because of the personalisation options buyers can add to the model of their choice and, in addition there are regular special edition versions coming on stream to keep the model fresh.

One of the latest is the DS3 Pink, launched in January this year as DS3 DStyle Pink and DSport Pink. They are available with white and black body colours with fuchsia pink coloured roofs, pink capping to the door mounted mirrors, wheel centre caps — and a fuchsia pink dashboard and colour-coded gearlever knob.

The DS3 DStyle Pink is available with either a VTi, 1.6-litre 120hp petrol engine or a 1.6-litre e-HDi 90hp Airdream diesel unit. Buyers of the DS3 DSport Pink have the choice of a punchy 152bhp (155hp) 1.6-litre THP turbocharged petrol engine or the frugal 115hp 1.6-litre eHDI turbodiesel; both of these powerplants are mated to six-speed manual gearboxes.

I have just had a colourful driving experience in the DS3 DSport Pink with the well-known 155hp 1.6-litre THP turboed petrol engine priced at Ł17,800. This unit is used in other Citroen/Peugeot models as well as the MINI range (not everybody knows that!). And it's well liked because of its punchy mid-range performance and its 133mph top speed.

Because it delivers 177lb ft of torque from only 1,400rpm it is exceptionally responsive — a zero to 62mph acceleration time of 9.3 seconds. But it is more impressive when supplying immediate overtaking power mid-range without having to change down through the 'box. Just as well because the gearchange was on the notchy side….

Also, this performance doesn't come at the expense of fuel economy. Officially it will return 47.1mpg in the Combined Cycle and my week-long test drive figure was 43.4mpg covering stop/start town driving, motorways, and rural A/B winding roads — where it impressed best of all

The CO2 emissions are 135g/km which means Ł130 a year for road tax — company car drivers going the Pink route will pay 20% Benefit in Kind tax. Insurance for this sporty and colourful little number is group 24E.

The DS3 Pink undeniably makes a statement. Though quite what that statement is, I'm not entirely sure — probably it's simply 'look at me'. But I have to say that despite its black bodyshell and pink bits on the roof and mirrors it didn't — thankfully! — draw that much attention. Apart from my wife, who thought it was a 'bit bright'.

Long gone are the days of my youth when we personalised our 'go-faster' cars with a trip to Halfords to buy wide wheels, large bore exhausts, fog lights and glitzy body-tape. These days manufacturers do it all for us — at a price — under their popular 'personalisation' programmes. In the case of the 152bhp DS3 DSport Pink this is only Ł325 more than the standard 152bhp DSport which, if pink is your colour, looks good value.

In all other respects the DSport Pink is the same in its seating and driving as other sportier versions of the DS3. Its chic three-door styling is appealing and it's roomy in the front although, with very limited rear seat legroom, it's really a 2+2.

It has a useful 285-litre boot that can be expanded to a more useful 980 litres when not carrying rear passengers, offers sharp steering, a nimble agility and sharp handling although the suspension is quite firm, giving a 'crashy' ride at times. The rear quarter visibility is very poor due to the striking window design so coming out of road junctions needs extra care.

Against: Stating the obvious, the pink coloured bits will not appeal to everybody, nor will the crashy ride, poor rear quarter visibility and notchy gearchange.

Overall it's a neat, well equipped and colourful package, one that's easy on the pocket in terms of running costs given its performance if not quite so easy on the eyes in terms of colour. — David Miles