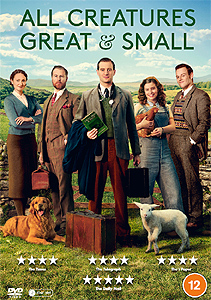 “Movingly evocative, amusing, utterly
charming and based on the life and
times of a veterinary surgeon and writer,
the beloved classic All Creatures Great
& Small gets a well-groomed make-over
that is as appealing as the original.
Now, following a record-breaking run on
Channel 5, it’s out on DVD...”

Narrowly missing his appointment with Siegfried when the bus driver drops him off in the middle of nowhere, forcing him to walk to Darrowby in a downpour, James finds he has to establish himself and earn acceptance from the locals, some of whom are intent on giving him a difficult time and have plenty of tricks up their sleeves!

Siegfried is a hard taskmaster who demands perfection from his assistants. Having already dispensed with a number of applicants, he is determined to test James. However, straight-talking housekeeper Mrs Audrey Hall (Anna Madeley: Deadwater Fell; Patrick Melrose) seems to take to him and persuades Siegfried to give him a chance.

A close encounter with a horse leaves James in the mire and, after Jeremy Sharpe (Steve Jackson) plies him with his home brew, James creates a potential disaster when he accidentally puts cats awaiting treatment back in the wrong cages after feeding them.

At the Alderson's farm to help a calf with a fractured leg bone, James meets Helen Alderson (Rachel Shenton: White Gold; Hollyoaks) and her twelve-year-old sister Jenny (Imogen Clawson) and gets too close to comfort to their bull. Helen advises him to stand up to Siegfried whom, she says, is a good man.

James falls foul of Siegfried, who is about to operate on the wrong cat because of James' earlier carelessness. The cat belongs to Mrs Dinsdale (Naomi Radcliffe), who tells Siegfried that her husband Henry (Mark Noble) told her how drunk James was on the home brew. It almost costs him his job.

James begins to see a grudging respect from Siegfried when he delivers a calf while its mother struggles to give birth and saves them both to the delight of farmer Dick Rudd (Alexis Platt) and his wife (Laura Lindsay). James has the courage to tell Siegfried how insufferable he is.

James begins to get used to Siegfried and the Yorkshire country folk, starting to love his work and managing the idiosyncrasies of the car Siegfried has given him to drive!

As James proves his mettle in life and death situations, he is distracted by Siegfried's unruly younger brother Tristan (Callum Woodhouse: The Durrells; Cold Feet), who is a disappointment to Siegfried as he originally failed his exams at veterinary college.

Further trouble is on its way after James incorrectly diagnoses a fractured pelvis when Dennis Handshaw (Nigel Betts) and his wife Sylvie (Melanie Kilburn) cannot get their cow to stand.

James shyly approaches Helen to ask her out, but she seems to be dating Hugh Hulton (Matthew Lewis: Harry Potter; Ripper Street). Could she be a potential love interest for James?

Liberally laced with well-chosen wit and humour, the series originally aired on Channel 5 and is taken from the beloved classic autobiographical book All Creatures Great and Small, which is based on the life and times of veterinary surgeon and writer James Herriot (aka James Alfred Wight, OBE).

Following the record-breaking television run, the new series is a creditable remake of the original series which ran from 1978 to 1990, with all its tantalising period charm, quirky country characters and the breathtaking scenery of England's Yorkshire Dales.

The 2020 series became Channel 5's Number One British drama ever and was the highest rated programme of the year when it launched to a massive five million viewers. Superb.

Also starring the wildly beautiful scenery, All Creatures Great & Small is a delightful, entrancing period story of an ambitious young man from Glasgow who follows his dream of becoming a vet in Northern England.

With the classic farming scenes set amid the splendour of the Dales and an abundance of creatures needing help, All Creatures Great & Small is the perfect antidote to brighten up a very challenging year and ideal for animal lovers everywhere.

"Irresistible. Always has been, always will be" — Mail On Sunday

"Sometimes you want to see superheroes save the world. And sometimes you just want to watch a vet coax a cow to its feet… One of life's simple pleasures" — **** The I Paper